This book describes the holy life of Padre Pio, an Italian priest who lived in the 20th century. His life and miracles demonstrate the truth of the Catholic religion.

Padre Pio was a Franciscan Capuchin priest who bore the five wounds of Christ on his body visibly for more than fifty years.  Padre Pio was also a seer, mind-reader, prophet, miracle-worker, confessor, mystic, ascetic, and missionary on a world-wide scale.[1]  Hundreds of books and articles have been written about Padre Pio.  Lengthy articles about him have appeared in many magazines including Newsweek, Time, and the New York Times Magazine.[2] 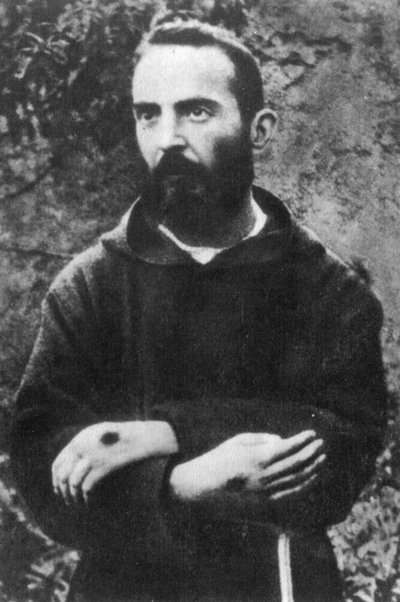 Click here to get the book on Padre Pio: Order Here

You can also order the padre pio book through the mail by check or money order or you can call 1-800-275-1126 to place your order.

The event of receiving the Stigmata

Having the stigmata means having on one’s body the “marks resembling wounds on the crucified body of Christ.”[3]  There have only been about sixty accepted instances of the stigmata in the Catholic Church’s history.[4]

Padre Pio was the first priest in the history of the Catholic Church to receive the visible stigmata.  He had the visible stigmata for over fifty years, and his loss of blood over the years was so great that, according to medical science, he could not have survived for very long – certainly not fifty years.[5]

Padre Pio actually received the stigmata invisibly on August 14, 1910.[6]  Padre Pio prayed that his stigmata would remain invisible and hidden from the eyes of men.[7]  But on September 20, 1918, while making his thanksgiving after a Mass, he received the visible stigmata.  He was commanded by his spiritual director to describe everything that happened on that day.  Padre Pio described the event:

“…I saw a mysterious visitor before me…feet and side were dripping blood.  The sight frightened me…Then the vision of the visitor passed away, and I saw that my hands, feet and side were pierced and dripping blood.  You will imagine the pain I felt then and that I kept experiencing almost every day continually.[8]  The heart wound bleeds continually, especially from Thursday evening until Saturday.  Dear Father, I am dying of pain because of the wound and the resulting embarrassment…I will raise my voice and will not stop imploring him until in his mercy he takes away, not the wound or the pain, which is impossible because I wish to be inebriated with pain, but these outward signs which cause me such embarrassment and unbearable humiliation.”[9]

His stigmata were very deep wounds at the center of his hands and feet and on the left side of his body.  His hands and feet were pierced all the way through; you could even see light through the membrane that covered his wounds.  He wore half-gloves over his hands (except during Mass), and stockings on his feet.[10]  Over the years, thousands of people saw Padre Pio’s wounds exposed at his Masses.[11]  The bandage that was located on his side wound would become soaked with blood during the night; it had to be changed the following morning.  His stigmata was examined by doctors on several occasions.  The unbiased conclusion that they reached was that his wounds were unexplainable.  Without direct permission of his superiors, no one was able to see the wounds.[12]

Dr. Bignami examined the wounds shortly after Padre Pio received them.  He stated: “…I do not understand how these wounds have persisted for nearly a year now without getting better or worse.”[13]

Corroborating the conclusion of the doctors, that the presence of the stigmata was unexplainable and miraculous, was the fact that Padre Pio had operations for a hernia and for a cyst.  These conditions healed normally, but his stigmata didn’t heal normally.[14]  Amazingly, Padre Pio’s wounds on his hands were often open and exposed, but remained completely free from infection.  He lost about a cup-full worth of blood every day from the wound on his side, which was covered always by a linen cloth.[15]

Another doctor, Dr. Sanguinetti, told a friend: “If you or I would suffer one-tenth of the pain that Padre Pio suffers from his wounds, we’d be dead.”[16]

Padre Pio was asked why the wound in his side was in a slightly different place than the place where Our Lord’s wound was.  He responded: “It would be too much if it were exactly like the Lord’s.”[17]  Besides the stigmata, Padre Pio suffered the crowning with thorns and the flagellation almost once a week.[18]

The blood around the stigmata of Padre Pio gave off at times a pleasant fragrance “like a mixture of violets and roses.”  One doctor added, “One should consider that of all the parts of the human organism, blood is the quickest to decompose.  In any case blood never gives off a pleasant odor.”[19]

In the archives at Our Lady of Grace Friary, there are volumes of testimonies from more than a thousand different people who were pronounced hopelessly ill by doctors, but were cured of incurable maladies and the effects of crippling injuries through the intercession of Padre Pio.[20]  Padre Pio also caused numerous conversions to occur among unbelievers, atheists and agnostics – and people who claimed to be Catholics, but had lapsed in the practice of the Faith.[21]

Padre Pio’s mother gave birth to eight children, three of whom died at a very early age.[22]  Padre Pio was born on May 25, 1887, named Francesco Forgione, and was baptized the following day.[23]  At five years of age, Francesco was extremely sensitive to matters concerning God.  At this time, he began to have visions – visions of holy things as well as visions of very evil things.  These horribly evil visions scared him and caused him to cry.[24]  Francesco (Padre Pio) didn’t like to go out and play with children of his age because, as he said, “They are not honest, they use bad language, and they swear.”[25]

Francesco was a meditative and docile child.  At five years old, he said that he already pledged fidelity to St. Francis of Assisi; at nine years old his Mother discovered that he had been attempting to sleep on the hard, cold floor, with a stone for a pillow.[26]  As a child, it had become second nature for Francesco, when around girls, to control his eyes modestly, keep his head somewhat inclined, act very reserved, and avoid becoming too familiar with them.[27]  Every night Padre Pio’s family said the rosary together.  The Rosary held a special place in their home.  Other things could be sacrificed in their house, but not the Rosary.[28]

One time, as a youngster, he saw a girl that he knew toiling away with her needle, sewing a band on a dress.  He told her: “Andrianella, today we don’t work.  It’s Sunday.”  Showing her annoyance, the girl replied: “Little boy, you are too small to talk like that.”  Francesco left her, and came back with a pair of scissors.  He then grabbed the band she had been working on and cut it into pieces.[29]

“[If I Were King] I would fight, first against divorce, which so many wicked men desire, and make people respect as much as possible the sacrament of matrimony.  What happened to Julian the Apostate, who was brave, self-controlled, and studious, but who made the big mistake of denying Christianity, in which he was educated, because he decided to revive Paganism?  His life was wasted because he did not attain anything but the despicable name of apostate.”[30]

On January 6, 1903, Padre Pio entered religious life as a Capuchin monk.[31]  Padre Pio’s health was so bad that his theology professor said to him: “Your health is not good; so you cannot become a preacher.  My hopes for you are that you will be a great and conscientious confessor.”

The statement was prophetic, for it would be fulfilled in an incredible way.[32]  Padre Pio was ordained as a priest of the Catholic Church on August 10, 1910.[33]

Padre Pio On Sins of Impurity

A Girl Without Pupils Sees!

Padre Pio seen in the Air

On Padre Pio’s relationship with angels

Padre Pio on the Devil

The Astounding Tortures the demons put Padre Pio through

Padre Pio wanted to be a missionary

Padre Pio on the Blessed Mother and the Rosary

Padre Pio on the Rosary as the Weapon

Some other Visions given to Padre Pio

On the Church, his order, the justice of God, the world, and souls being lost to Hell

On people who seek the extraordinary

Padre Pio on the Faith

In a letter on December 3, 1916: “You must try to please God alone, and if He is content everybody is content.” (Padre Pio of Pietrelcina, Letters Vol. III, National Centre for Padre Pio, Barto, PA. p. 543.)

Padre Pio on the world

Padre Pio on the Mass

The End of Padre Pio’s Life