In the Gospel, Our Lord Jesus Christ informs us that in the last days the true Faith would hardly be found on the earth.  He tells us that “in the holy place” itself there will be “the abomination of desolation” (Mt. 24:15), and a deception so profound that, if it were possible, even the elect would be deceived (Mt. 24:24).

Matthew 24:15- “When therefore you shall see the abomination of desolation, which was spoken of by Daniel the prophet, standing in the holy place: he that readeth let him understand.”

Matthew 24:24-25- “For there shall arise false Christs and false prophets, and shall show great signs and wonders, insomuch as to deceive (if possible) even the elect.  Behold I have told it to you, beforehand.”

2 Thess. 2:3-5- “Let no man deceive you by any means, for unless there come a revolt [apostasy] first, and the man of sin be revealed, the son of perdition, Who opposeth, and is lifted up above all that is called God, or that is worshipped, so that he sitteth in the temple of God, shewing himself as if he were God.  Remember you not, that when I was yet with you, I told you these things?”

In 1903, Pope St. Pius X thought that he might be seeing the beginning of the evils which will fully come to pass in the last days.

Pope St. Pius X, E Supremi (# 5), Oct. 4, 1903: “… there is good reason to fear lest this great perversity may be as it were a foretaste, and perhaps the beginning of those evils which are reserved for the last days; and that there may already be in the world the ‘Son of Perdition’ of whom the Apostle speaks (2 Thess. 2:3).”[1]

The New Testament tells us that this deception will happen in the very heart of the Church’s physical structures, in “the Temple of God” (2 Thess. 2:4) and “in the holy place” (Mt. 24:15).  It will arise because people receive not the love of the truth (2 Thessalonians 2:10).

In 2 Thessalonians 2, St. Paul speaks of the last days being characterized by a great apostasy that will be the worst ever – even worse than was experienced in the Arian crisis in the 4th century, in which an authentically Catholic priest was hardly to be found.

Fr. William Jurgens: “At one point in the Church’s history, only a few years before Gregory’s [Nazianz] present preaching (A.D. 380), perhaps the number of Catholic bishops in possession of sees, as opposed to Arian bishops in possession of sees, was no greater than something between 1% and 3% of the total.  Had doctrine been determined by popularity, today we should all be deniers of Christ and opponents of the Spirit.”[2]

Fr. William Jurgens: “In the time of the Emperor Valens (4th century), Basil was virtually the only orthodox Bishop in all the East who succeeded in retaining charge of his see… If it has no other importance for modern man, a knowledge of the history of Arianism should demonstrate at least that the Catholic Church takes no account of popularity and numbers in shaping and maintaining doctrine: else, we should long since have had to abandon Basil and Hilary and Athanasius and Liberius and Ossius and call ourselves after Arius.”[3]

St. Gregory Nazianz (+380), Against the Arians: “Where are they who revile us for our poverty and pride themselves in their riches?  They who define the Church by numbers and scorn the little flock?”[4]

Prophecy of St. Nicholas of Fluh (1417-1487): “The Church will be punished because the majority of her members, high and low, will become so perverted.  The Church will sink deeper and deeper until she will at last seem to be extinguished, and the succession of Peter and the other Apostles to have expired.  But, after this, she will be victoriously exalted in the sight of all doubters.”[5]

St. Paul further says that this apostasy will result in a man sitting in the temple of God and “shewing himself as if he were God.”  Later in this book, we prove that this is exactly what has happened by a man sitting in St. Peter’s Basilica declaring that he and everyone else is God.

Fr. Herman Kramer was a Catholic priest who spent 30 years studying and writing a book on the Apocalypse.  In his book, he wrote the following about St. Paul’s prophecy concerning the Antichrist sitting in the Temple of God.

“St. Paul says that Antichrist ‘sitteth in the temple of God’… This is not the ancient Temple of Jerusalem, nor a temple like it built by Antichrist, as some have thought, for then it would be his own temple… this temple is shown to be a Catholic Church, possibly one of the churches in Jerusalem or St. Peter’s in Rome, which is the largest church in the world and is in the full sense ‘The Temple of God.’”[6]

Notice that Kramer says that “the Temple of God” probably refers to St. Peter’s Basilica in Rome.

Pope Pius XI, Quinguagesimo ante (#30), Dec. 23, 1929: “… such a great number of them came to the Basilica of St. Peter’s for the jubilee of indulgence that We have probably never seen that great temple so crowded.”[7]

The Catholic Encyclopedia article on “Antichrist” indicates that St. Bernard believed that the Antichrist would be an antipope:

“...St. Bernard speaks in the passage of the Antipope [as the Beast of the Apocalypse].”[8]

Our Lady of La Salette, Sept. 19, 1846: “Rome will lose the Faith and become the seat of the Anti-Christ… the Church will be in eclipse.” 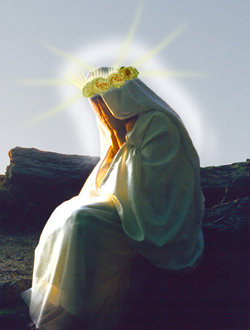 This startling prophecy coincides with the prophecies in Sacred Scripture (Apocalypse 17 and 18), which inform us that the city of seven hills (Rome) will become a harlot (a counterfeit Bride of Christ), which will commit spiritual fornication (idolatry) and tread upon the blood of the saints (false ecumenism).  The great harlot prophesied in the Bible is not the Catholic Church; it is a counterfeit Catholic Church, an apostate, phony Bride which arises in the last days to deceive Catholics and eclipse the true Church which has been reduced to a remnant.  In this book we will bring forward the overwhelming, undeniable, irrefutable evidence from doctrinal grounds and unassailable facts that the “Church” which has arisen with the Second Vatican Council (1962-1965) is not the Catholic Church at all, but rather a massively fraudulent Counter-Church which denies the fundamental teachings of the Catholic Church.

We will show that the men who imposed this new Vatican II religion and the New Mass were not Catholics at all, but manifest heretics preaching a new religion.

In fact, any doubts about the authenticity of Our Lady’s message at La Salette will be obliterated by a careful examination of the evidence in this book.  Among other things, this book will document that the Vatican now teaches that Jews are perfectly free not to believe in Jesus Christ. 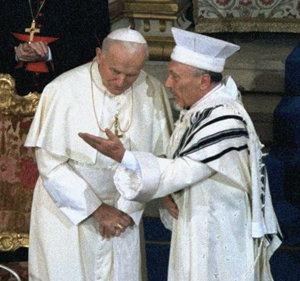 This may startle some, but this is a fact.  Without even considering all of the other apostasy which we will cover in this book, this fact proves that Our Lady’s words have come true: Rome (not the Catholic Church) has lost the Faith (given way to a non-Catholic, counterfeit sect) and become the seat of the Antichrist.

In late 2001, the Pontifical Biblical Commission released a book entitled The Jewish People and the Holy Scriptures in the Christian Bible.  The book argues that the Jews’ continued wait for the Messiah is validated and justified by the Old Testament.  “The expectancy of the Messiah was justified in the Old Testament,” papal spokesman Joaquin Navarro-Valls explained, “and if the Old Testament keeps its value, then it keeps that as a value, too.  It says you cannot just say all the Jews are wrong and we are right.”  Asked by reporters whether his statements might be taken to suggest that the Messiah may not in fact have come, Navarro-Valls replied, “It means it would be wrong for a Catholic to wait for the Messiah, but not for a Jew.”  This means that the Vatican now holds that the Jews are perfectly free to reject Christ; this is the teaching of the Vatican II “popes.”

Rome has lost the Faith and become the seat of the Antichrist.

But how did this come about, and what are Catholics to do about it?  This book will endeavor to answer both of those questions in detail.