Pope Leo XIII’s Prayer to St. Michael the Archangel is prophetic.  Composed over 100 years ago, and then suppressed, Pope Leo XIII’s original Prayer to St. Michael is one of the most interesting and controversial prayers relating to the present situation in which the true Catholic Church finds itself.  On September 25, 1888, following his morning Mass, Pope Leo XIII became traumatized to the point that he collapsed.  Those in attendance thought that he was dead.  After coming to consciousness, the pope described a frightful conversation that he had heard coming from near the tabernacle.  The conversation consisted of two voices – voices which Pope Leo XIII clearly understood to be the voices of Jesus Christ and the Devil.  The Devil boasted that he could destroy the Church, if he were granted 75 years to carry out his plan (or 100 years, according to some accounts).  The Devil also asked permission for “a greater influence over those who will give themselves to my service.”  To the Devil’s requests, Our Lord reportedly replied: “you will be given the time and the power.”

Shaken deeply by what he had heard, Pope Leo XIII composed the following Prayer to St. Michael (which is also a prophecy) and ordered it to be recited after all Low Masses as a protection for the Church against the attacks from Hell.  What follows is the prayer (note especially the bolded portions), followed by some of our comments.  The prayer was taken from The Raccolta, 1930, Benziger Bros., pp. 314-315.  The Raccolta is an imprimatured collection of the official and indulgenced prayers of the Catholic Church.

O Glorious Archangel St. Michael, Prince of the heavenly host, be our defense in the terrible warfare which we carry on against principalities and Powers, against the rulers of this world of darkness, spirits of evil.  Come to the aid of man, whom God created immortal, made in his own image and likeness, and redeemed at a great price from the tyranny of the devil.

Fight this day the battle of the Lord, together with the holy angels, as already thou hast fought the leader of the proud angels, Lucifer, and his apostate host, who were powerless to resist thee, nor was there place for them any longer in Heaven.

That cruel, that ancient serpent, who is called the devil or Satan, who seduces the whole world, was cast into the abyss with his angels.  Behold, this primeval enemy and slayer of men has taken courage.  Transformed into an angel of light, he wanders about with all the multitude of wicked spirits, invading the earth in order to blot out the name of God and of his Christ, to seize upon, slay and cast into eternal perdition souls destined for the crown of eternal glory.  This wicked dragon pours out, as a most impure flood, the venom of his malice on men of depraved mind and corrupt heart, the spirit of lying, of impiety, of blasphemy, and the pestilent breath of impurity, and of every vice and iniquity.

These most crafty enemies have filled and inebriated with gall and bitterness the Church, the spouse of the immaculate Lamb, and have laid impious hands on her most sacred possessions.  In the Holy Place itself, where has been set up the See of the most holy Peter and the Chair of Truth for the light of the world, they have raised the throne of their abominable impiety, with the iniquitous design that when the Pastor has been struck, the sheep may be scattered.

Arise then, O invincible Prince, bring help against the attacks of the lost spirits to the people of God, and give them the victory.  They venerate thee as their protector and Patron; in thee holy Church glories as her defense against the malicious power of hell; to thee has God entrusted the souls of men to be established in heavenly beatitude.  Oh, pray to the God of peace that He may put Satan under our feet, so far conquered that he may no longer be able to hold men in captivity and harm the Church.  Offer our prayers in the sight of the Most High, so that they may quickly conciliate the mercies of the Lord; and beating down the dragon, the ancient serpent, who is the devil and Satan, do thou again make him captive in the abyss, that he may no longer seduce the nations.  Amen.

Behold the Cross of the Lord; be scattered ye hostile powers.
The Lion of the tribe of Judah has conquered, the root of David.
Let thy mercies be upon us, O Lord.
As we have hoped in thee.
O Lord, hear my prayer.
And let my cry come unto thee.

Let us pray.
O God, the Father of our Lord Jesus Christ, we call upon thy holy name, and as suppliants we implore thy clemency, that by the intercession of Mary, ever Virgin immaculate and our Mother, and of the glorious Archangel St. Michael, thou wouldst deign to help us against Satan and all other unclean spirits, who wander about the world for the injury of the human race and the ruin of souls.  Amen.

As one who reads the prayer (especially the bolded portion) can see, Pope Leo XIII seemed to foresee and predict the great apostasy; and he seemed to pinpoint that this apostasy would be led from Rome – Rome which alone is “the Holy Place itself, where has been set up the See of the most holy Peter and the Chair of Truth for the light of the world.”  Pope Leo foresaw that this place (Vatican City in Rome), where had been set up the Chair of Peter by the first Pope, St. Peter himself, would become the throne of Satan’s abominable impiety, with the “iniquitous design that when the Pastor (the true Pope) has been struck, the sheep (the Catholic faithful) may be scattered.”  These are Pope Leo XIII’s words.

Pope Leo XIII was not predicting the defection of the Catholic Church (which is impossible, as the gates of Hell can never prevail against the Church [Mt. 16]), nor the defection of the Chair of Peter (which is also impossible), but rather he was predicting the implementation of an apostate, counterfeit Catholic religion from Rome, in which “the pastor” (the true pope) is replaced by a usurping antipope (as has occurred at times in Church history), with the iniquitous design that “the sheep may be scattered.”

Pope Leo’s prayer also foresaw that Satan’s impure apostates would lay impious hands “on the Church’s most sacred possessions.”  What are the Church’s most sacred possessions?  The most sacred possessions of the Church are those things which Christ entrusted to Her: namely, the deposit of faith (with all of its dogmas) and the seven sacraments instituted by Our Lord Jesus Christ Himself.  Therefore, Pope Leo’s prayer foretold the attempted destruction of the deposit of faith with Vatican II and the new sacramental rites of the Vatican II Church.  Both of these will be covered in detail in this book.  We will see that Paul VI’s laying of impious hands on the Church’s seven sacramental rites beginning in April of 1969, which produced an invalid New Mass, an invalid New Rite of Ordination, and gravely doubtful rites of Confirmation and Extreme Unction, fulfilled Pope Leo’s prediction to the letter.

In 1934, Pope Leo’s striking prayer (given above) was changed without explanation.  The key phrase referring to the apostasy in Rome (the Holy Place, where the See of Peter has been set up for the light of the world) was removed.  Around the same time, the use of Pope Leo XIII’s longer Prayer to St. Michael after each Low Mass was replaced by a shorter prayer, the now famous abbreviated Prayer to St. Michael.  This prayer goes as follows:

“St. Michael the Archangel, defend us in battle, be our protection against the wickedness and snares of the devil; may God rebuke him, we humbly pray; and do thou, O Prince of the heavenly host, by the power of God, thrust into hell Satan and all evil spirits who wander through the world for the ruin of souls. Amen.”

There is nothing wrong with this prayer to St. Michael; in fact, it is very good and efficacious.  However, the point is that it’s not the longer Prayer to St. Michael that Pope Leo XIII composed.    The shorter prayer was, in the view of many, promoted as a substitute, so that the faithful would be unaware of the incredible content of the longer prayer, as described above.  If the longer Prayer to St. Michael had been recited at the end of every Low Mass and not suppressed in 1934, how many millions more would have been stirred to a resistance when they encountered the attempted new post-Vatican II religion that we will cover in this book?  How many would have seen through the systematic dismantling of the traditional Catholic Faith after Vatican II?

Pope Leo XIII’s longer Prayer to St. Michael also fits perfectly with Our Lady of La Salette’s famous appearance and prediction in 1846: “Rome will lose the faith and become the Seat of the Antichrist... the Church will be in eclipse.”  Pope Leo’s words suggest that Antichrist himself, or at least the forces of Antichrist, would set up their seat in Rome: “In the Holy Place itself, where has been set up the See of the most holy Peter… they have raised the throne of their abominable impiety…” 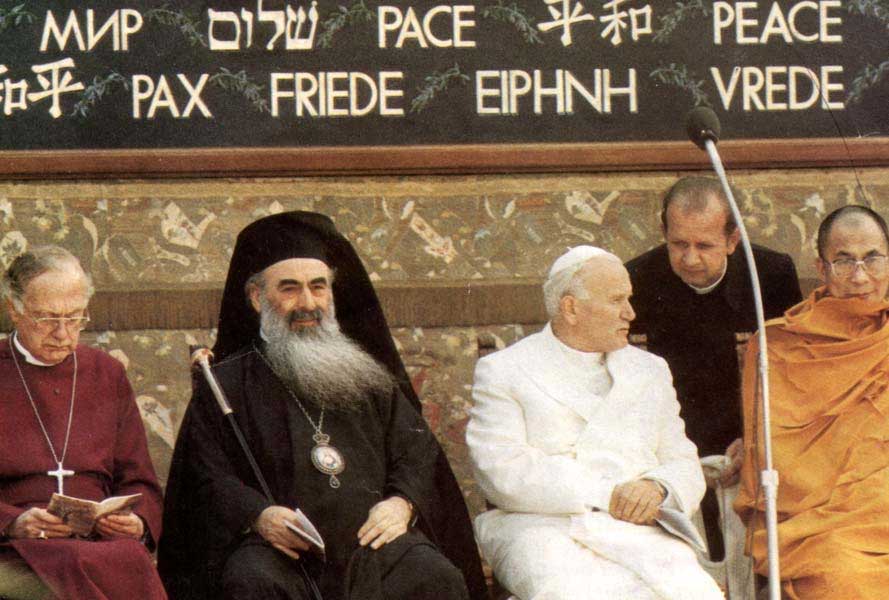 Another photo of John Paul II at his 1986 interreligious prayer service in Assisi, Italy – something totally condemned by the Catholic Church (more on this in the section on John Paul II)