Introductory Note: * A Heretic is a baptized person who rejects an authoritative teaching of the Roman Catholic Church. A schismatic is a person who refuses communion with a true Pope or refuses communion with true Catholics. An apostate is a person who rejects the Christian faith completely. All heretics, schismatics and apostates sever themselves from the Catholic Church automatically (Pius XII, Mystici Corporis, June 29, 1943). Therefore, if one is a heretic he is not a Catholic (Pope Leo XIII, Satis Cognitum June 29, 1896). And most heretics convince themselves that they are not denying any dogma when they actually are. This page will be updated periodically. (All emphasis, such as bolding, underlining, and italicization is not necessarily that of the quoted author.) * Heresies from Benedict XVI used in past Heresy of the Week columns are below, beginning with the latest one. His worst heresies are found in our section on: The Heresies of Benedict XVI file. Other past Heresies of the Week are probably found in either the Heresy of the Week Archive or the Some of the Recent Feature Articles page or The Heresy of the Week Archive for those from years back.

Feb – Benedict XVI’s Incredible Heresies on “the Orthodox”: He Teaches That Schism Is Holiness

Apr – Benedict XVI declares Anglicans to be “the faithful,” a schismatic leader a faithful servant of God, and more

Jan – Benedict XVI states: “I call upon the Church, in every situation, to persist in esteem for Muslims” during his trip to Benin, Africa – the birthplace of Voodoo

Jan – Benedict XVI’s recent promotion of the heresies of religious indifferentism, religious liberty and other heresies

Nov – Benedict XVI’s Assisi Event – How Bad Was It?

Oct – Benedict XVI’s Incredible Assault on the Catholic Faith; His Apostasy in Germany and more

July – Benedict XVI announces his plan for Assisi – He describes various false religious leaders who will gather there as “Pilgrims of truth, pilgrims of faith” – He also pays tribute to the schismatic “Orthodox” Church and more

June – Benedict XVI prays for the dead with the Chief Rabbi of Rome, promotes the motto of the French revolution: liberty, equality and fraternity, and more

Mar – Benedict XVI says the “Orthodox” have saints and martyrs, and looks forward to 2017 and the opportunity to celebrate a common ecumenical commemoration for the 500th anniversary of the posting of Martin Luther’s theses

Apr – Benedict XVI’s Heresies at the Lutheran Church in Rome

July – Benedict XVI promotes the heresy of religious freedom; he states that the SSPX is not in communion with the Church; and he aggressively promotes the need for “a world political authority”

June – The Heresies in Benedict XVI’s Recent Encyclical, Charity in Truth; His Call for a New World Order

May – Benedict XVI’s Pilgrimage of Apostasy in the Middle East

Feb – Benedict XVI and the Vatican declare, in a special published note, that if Bishop Williamson doesn’t accept belief in “the Shoah” (“the Holocaust”) he cannot be accepted as a Catholic; and other amazing heresies from the apostate Benedict XVI

Jan – Benedict XVI calls the schismatic “Orthodox” Church great and venerable; His telegram to Barack Obama; and his Heretical Addresses to new Ambassadors

May – Benedict XVI states that the immense task of rebuilding the Church has been laid on the shoulders of an open schismatic!

Apr – Some other heretical statements from Benedict XVI while in America

Feb – Benedict XVI praises the UN and interreligious dialogue; he states that people who are committed to false religious creeds are of good will

Feb – Benedict XVI states again that St. Paul’s desire was not so much to baptize all peoples and that we should have respect for different false religions

Jan – Benedict XVI states that the deceased leader of the schismatic “Orthodox” Church was a distinguished Pastor in the Church, the Archbishop of Greece and a faithful servant of the Lord

Jan – Benedict XVI states that false religions should be valued; that Church teachings evolve; that things adopted by the authorities of the Catholic Church have been shown by history to be false

Dec – Benedict XVI praises both Assisi Prayer Meetings and states that St. Paul was not concerned for the salvation of those who did not hear the Gospel!

Sept – Significant Heresies from Benedict XVI regarding Schismatics, Other Religions and More

Sept – More Heresies from Benedict XVI on Judaism and Other Religions

Aug – Benedict XVI on a rampage with the schismatics

June – Benedict the Heretic strikes again; he states once again that a schismatic leader is a pastor in the Church

June – Vatican has no plans to convert Russia to Catholicism! – “Cardinal” Poupard

May – Benedict XVI Esteems All Religions!

Jan – A New One: Benedict XVI Says The “Catholic Church” Has Respect For Islam

Oct – Benedict XVI Indicates That Judas Might Not Be In Hell

Sept – Benedict XVI has a Profound Respect for False Faiths

Apr – Benedict XVI Promotes Evolution, and says that Christ’s Resurrection is a stage in the process of evolution

Dec – Benedict XVI Encourages Methodists to Enter into the Totally Heretical Joint Declaration with the Lutherans on Justification, which rejects the Council of Trent

Nov – Benedict XVI Says That Non-Believers Can Be Saved

A HERETIC CANNOT BE A VALID POPE

(i) the promotion or elevation, even if it shall have been uncontested and by the unanimous assent of all the Cardinals, shall be null, void and worthless;
(ii) it shall not be possible for it to acquire validity (nor for it to be said that it has thus acquired validity) through the acceptance of the office, of consecration, of subsequent authority, nor through possession of administration, nor through the putative enthronement of a Roman Pontiff, or Veneration, or obedience accorded to such by all, nor through the lapse of any period of time in the foregoing situation;
(iii) it shall not be held as partially legitimate in any way…
(vi) those thus promoted or elevated shall be deprived automatically, and without need for any further declaration, of all dignity, position, honour, title, authority, office and power….

10. No one at all, therefore, may infringe this document of our approbation, re-introduction, sanction, statute and derogation of wills and decrees, or by rash presumption contradict it. If anyone, however, should presume to attempt this, let him know that he is destined to incur the wrath of Almighty God and of the blessed Apostles, Peter and Paul.

Given in Rome at Saint Peter’s in the year of the Incarnation of the Lord 1559, 15th February, in the fourth year of our Pontificate.

+ I, Paul, Bishop of the Catholic Church…”

St. Robert Bellarmine: “A pope who is a manifest heretic automatically (per se) ceases to be pope and head, just as he ceases automatically to be a Christian and a member of the Church. Wherefore, he can be judged and punished by the Church. This is the teaching of all the ancient Fathers who teach that manifest heretics immediately lose all jurisdiction.” (De Romano Pontifice, II, 30) 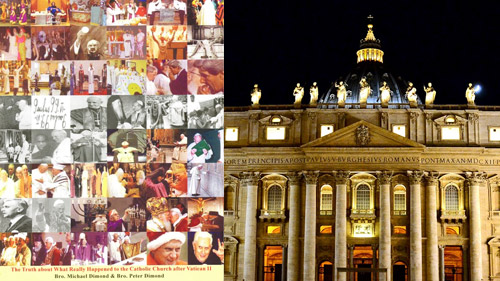 Benedict XVI Says There Is No Mission To Convert Jews 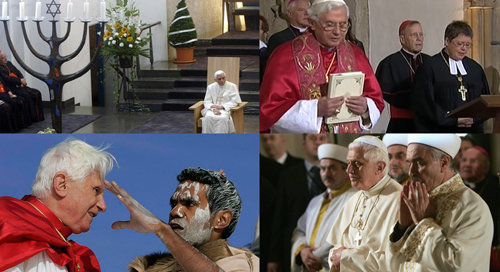 Benedict XVI prays for the dead with the Chief Rabbi of Rome, promotes the motto of the French revolution: liberty, equality and fraternity, and more

Benedict XVI announces his plan for Assisi - He describes various false religious leaders who will gather there as “Pilgrims of truth, pilgrims of faith” - He also pays tribute to the schismatic “Orthodox” Church and more

Benedict XVI’s recent promotion of the heresies of religious indifferentism, religious liberty and other heresies

Benedict XVI states: “I call upon the Church, in every situation, to persist in esteem for Muslims” during his trip to Benin, Africa – the birthplace of Voodoo

Benedict XVI’s astounding heresies on Islam and other false religions

Benedict XVI’s Incredible Heresies on “the Orthodox”: He Teaches That Schism Is Holiness

Benedict XVI declares Anglicans to be “the faithful,” a schismatic leader a faithful servant of God, and more

Benedict XVI's Heresies with Protestants during the “Week of Christian Unity”

Benedict XVI’s Incredible Assault on the Catholic Faith; His Apostasy in Germany and more
More
Our Video Channel