Sacrosanctum Concilium was Vatican II’s constitution on the sacred liturgy.  It was responsible for the incredible changes to the Mass and the other sacraments following Vatican II.

These incredible changes will be covered in more detail in the next section of this book dealing with “The Liturgical Revolution.”  What Sacrosanctum Concilium started, Paul VI finished by suppressing the traditional Latin Mass and replacing it with an invalid Protestant service that is referred to as the New Mass or the Novus Ordo Missae (the New Order of the Mass).  The “New Mass” alone has been responsible for the departure of millions from the Catholic Church. Paul VI also changed the rites of all seven sacraments of the Church, making grave and possibly invalidating changes to the sacraments of Extreme Unction, Confirmation and Holy Orders.  But it all began with Vatican II’s Constitution, Sacrosanctum Concilium.

The revolutionary intentions of Vatican II are clear in Sacrosanctum Concilium.

Sacrosanctum Concilium #63b: “Thereis to be a new edition of the Roman book of rites,and, following this as a model, each competent local church authority (see article 22.2) should prepare its own, adapted to the needs of individual areas, including those to do with language, as soon as possible.”[116]

Sacrosanctum Concilium #66: “Both rites of adult baptism are to be revised, the simpler one and the more elaborate one, the latter with reference to the renewed catechumenate.”[117]

Sacrosanctum Concilium #67: “The rite of infant baptism is to be revised, and adapted to the reality of the situation with babies.”[118]

Sacrosanctum Concilium #71: “The rite of confirmation is also to be revised.”[119]

Sacrosanctum Concilium #72: “The rites and formulas of penance are also to be revised in such a way that they express more clearly what the sacrament is and what it brings about.”[120]

Sacrosanctum Concilium #76: “The rites for different kinds of ordination are to be revised – both the ceremonies and the texts.”[121]

Sacrosanctum Concilium #77: “The rite of celebrating marriage in the Roman book of rites is to be revised, and made richer, in such a way that it will express the grace of the sacrament more clearly...”[122]

Sacrosanctum Concilium #79: “The sacramentals should be revised… the revision should also pay attention to the needs of our time.”[123]

Sacrosanctum Concilium #80: “The rite of consecration of virgins found in the Roman pontifical is to be subjected to review.”[124]

Sacrosanctum Concilium #82: “The rite of burying little children should be revised, and a special mass provided.”[125]

Sacrosanctum Concilium #89d: “The hour of prime is to be suppressed.”[126]

Sacrosanctum Concilium #93: “… the hymns are to be restored to their original form.  Things which smack of mythology or which are less suited to Christian holiness are to be removed or changed.”[127]

Sacrosanctum Concilium #128: “The ecclesiastical canons and statutes which deal with the provision of visible things for worship are to be revised AS SOON AS POSSIBLE…”[129]

Yes, the Devil could not wait to destroy the precious liturgical heritage of the Catholic Church by means of the heretics at Vatican II.  His goal was to leave as little of Tradition remaining as he could.  And, as we will continue to document, that’s exactly what he did. 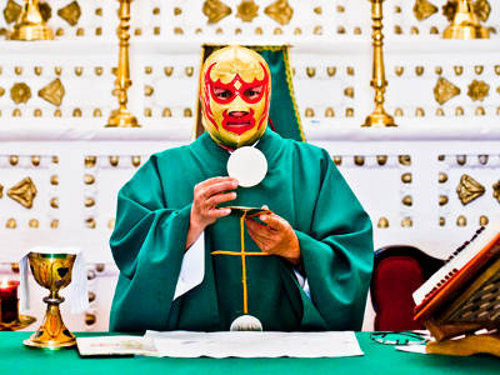 In Sacrosanctum Concilium #37 and #40.1, the Council falls into heresy against the teaching of Pope Pius X in Pascendi on Modernist Worship.

Sacrosanctum Concilium # 37: “… (the Church) cultivates and encourages the gifts and endowments of mind and heart possessed by various races and peoples… Indeed, it sometimes allows them into the liturgy itself, provided they are consistent with the thinking behind the true spirit of the liturgy.”[130]

Sacrosanctum Concilium # 40.1: “The competent local Church authority should carefully and conscientiously consider, in this regard, which elements from the traditions and particular talents of individual peoples can be brought into divine worship.  Adaptations which are adjudged useful or necessary should be proposed to the apostolic see, and introduced with its consent.”[131]

Notice again that Vatican II is calling for the customs and traditions of various peoples to be incorporated into the liturgy.

What Vatican II taught above (and what has been implemented all over the Vatican II Church in the decades following the promulgation of Vatican II) is exactly what Pope Pius X solemnly condemned in Pascendi as Modernist worship!

Pope Pius X, Pascendi Dominici Gregis (# 26), Sept. 8, 1907, On the Worship of Modernists: “THE CHIEF STIMULUS IN THE DOMAIN OF WORSHIP CONSISTS IN THE NEED OF ADAPTING ITSELF TO THE USES AND CUSTOMS OF PEOPLES, as well as the need of availing itself of the value which certain acts have acquired by long usage.”[132]

Vatican II’s teaching was condemned word for word by Pope Pius X in 1907!

In Sacrosanctum Concilium #34 and #50, Vatican II again contradicted a dogmatic constitution of the Church word for word.

Sacrosanctum Concilium # 34: “The rites should radiate a rich simplicity; they should be brief and lucid, avoiding pointless repetitions; they should be intelligible for the people, and should not in general require much explanation.”[133]

Sacrosanctum Concilium # 50: “Therefore the rites, in a way that carefully preserves what really matters, should become simpler.  Duplications which have come in over the course of time should be discontinued, as should the less useful accretions.”[134] 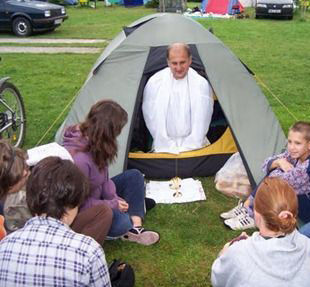 We can see just how “simple” they have become

Pope Pius VI explicitly condemned the idea that the traditional liturgical rites of the Church should be simplified in his dogmatic Constitution Auctorem fidei!

Pope Pius VI, Auctorem fidei, Aug. 28. 1794, # 33: “The proposition of the synod by which it shows itself eager to remove the cause through which, in part, there has been induced a forgetfulness of the principles relating to the order of the liturgy, ‘by recalling it (the liturgy) to a greater simplicity of rites, by expressing it in the vernacular language, by uttering it in a loud voice…’” – Condemned as rash, offensive to pious ears, insulting to the Church, favorable to the charges of heretics against it.[135]

Sacrosanctum Concilium also called for changing the rite of every sacrament, in addition to calling for “bodily self expression” in the liturgy (# 30):

Sacrosanctum Concilium # 30: “In order to encourage their taking an active share, acclamations for the people, together with responses, psalmody, antiphons and hymns, should be developed, as well as actions, movements and bodily self-expression.”[136]

Vatican II also called for “radical adaptation” to the liturgy (#40):

Sacrosanctum Concilium # 40: “However, in some places or in some situations, there may arise a pressing need for a more radical adaptation of the liturgy.”[137]

These passages of Vatican II may form part of the reason why the modern churches of the Vatican II sect frequently conduct “Masses” at which one finds polka bands, electric guitars, balloons, drums, native American ceremonies, topless dancers and rock music (see our section on “The Liturgical Revolution”).  One might also find the “priests” celebrating such “Masses” dressed in anything from football jerseys to clown costumes.  Yes, the “spirit of Vatican II” has truly touched the modern-day churches of the Vatican II sect.  However, true Catholics who have maintained their resistance to the Vatican II apostasy can take heart in the fact that Pope Gregory X at the Second Council of Lyons, and Pope Clement V at the Council of Vienne, authoritatively condemned all such abominations!

Pope Gregory X, Second Council of Lyons, 1274, Constitution 25: “Churches, then, should be entered humbly and devoutly; behavior inside should be calm, pleasing to God, bringing peace to the beholders, a source not only of instruction but of mental refreshment… In churches the sacred solemnities should possess the whole heart and mind; the whole attention should be given to prayer.  Hence where it is proper to offer heavenly desires with peace and calm, let nobody arouse rebellion, provoke clamor or be guilty of violence… Idle and, even more, foul and profane talk must stop; chatter in all its forms must cease.  Everything, in short, that may disturb divine worship or offend the eyes of the divine majesty should be absolutely foreign to the churches, lest where pardon should be asked for our sins, occasion is given for sin, or sin is found to be committed… Those indeed who impudently defy the above prohibitions… will have to fear the sternness of divine retribution and our own, until having confessed their guilt, they have firmly resolved to avoid such conduct in the future.”[138]

Pope Clement V, Council of Vienne, Decree # 22, 1311-1312: “There are some, both clergy and laity, especially on the vigil of certain feasts when they ought to be in church persevering in prayer, who are not afraid to hold licentious dances in the cemeteries of the churches and occasionally to sing ballads and perpetrate many excesses.  From this sometimes there follows the violation of churches and cemeteries, disgraceful conduct and various crimes; and the liturgical office is greatly disturbed, to the offense of the divine majesty and the scandal of the people nearby.”[139]

Finally, not wishing to leave anything untouched, Sacrosanctum Concilium made sure to call for pagan musical traditions in acts of Catholic worship (#119):

Sacrosanctum Concilium # 119: “In some parts of the world, especially in mission areas, peoples are found who have a musical tradition of their own, a tradition which has great importance for their religious and cultural way of life… For this reason, special care should be taken in the musical training of missionaries, so that, as far as possible, they will be able to encourage the traditional music of these peoples in schools, in choirs, and in acts of worship.”[140]

Thankfully, Pope Pius XII and the Council of Trent had already condemned any insertion of pagan musical tradition into the churches.

Pope Pius IV, Council of Trent, Session 22, Decree on things to be observed and avoided at Mass: ” And they should keep out of their churches the kind of music in which a base and suggestive element is introduced into the organ playing or singing, and similarly all worldly activities, empty and secular conversations, walking about, noises and cries, so that the house of God may truly be called and be seen to be a house of prayer.”[141]

Pope Pius XII, Musicae sacrae (# 42), Dec. 25, 1955: “[On Liturgical Music] It must be holy.  It must not allow within itself anything that savors of the profane nor allow any such thing to slip into the melodies in which it is expressed.”[142]

Is there any doubt that Vatican II tried to bring about a new apostate liturgy for its new apostate Church?  Vatican II brings down the anathema of the Church on its head!

Pope Paul III, Council of Trent, Session 7, Can. 13, ex cathedra: “If anyone shall say that the received and approved rites of the Catholic Church accustomed to be used in the solemn administration of the sacraments may be disdained or omitted by the minister without sin and at pleasure, or may be changed by any pastor of the churches to other new ones: let him be anathema.”[143]