On Nov. 4, 2016, the SSPX inaugurated its brand new $40 million seminary in Dillwyn, Virginia.  We discussed their massive new seminary, and why the SSPX is a heretical deception, in this article: The Society of St. Pius X (SSPX) to receive 40 million dollars for their heretical seminary project.  We exposed the pathetic faithlessness of the SSPX’s apostate leader, Bishop Bernard Fellay, in this post: Pathetic and Heretical SSPX Leader, Bishop Bernard Fellay, Cowers In The Face of Anti-Christ Journalist.  Our important video documentary, The Truth About The SSPX, The SSPX-MC, And Similar Groups, refutes and exposes Fellay and the positions of the heretical and schismatic SSPX in detail. 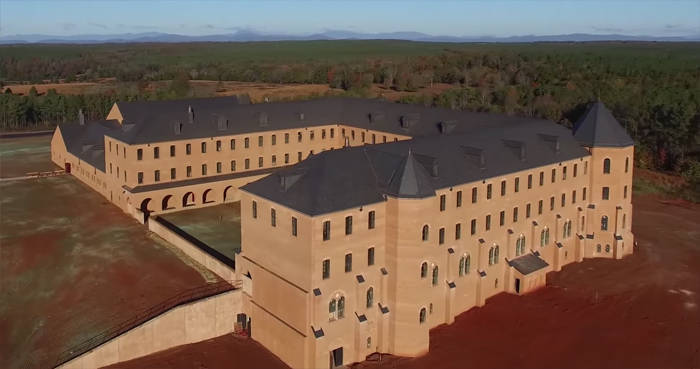 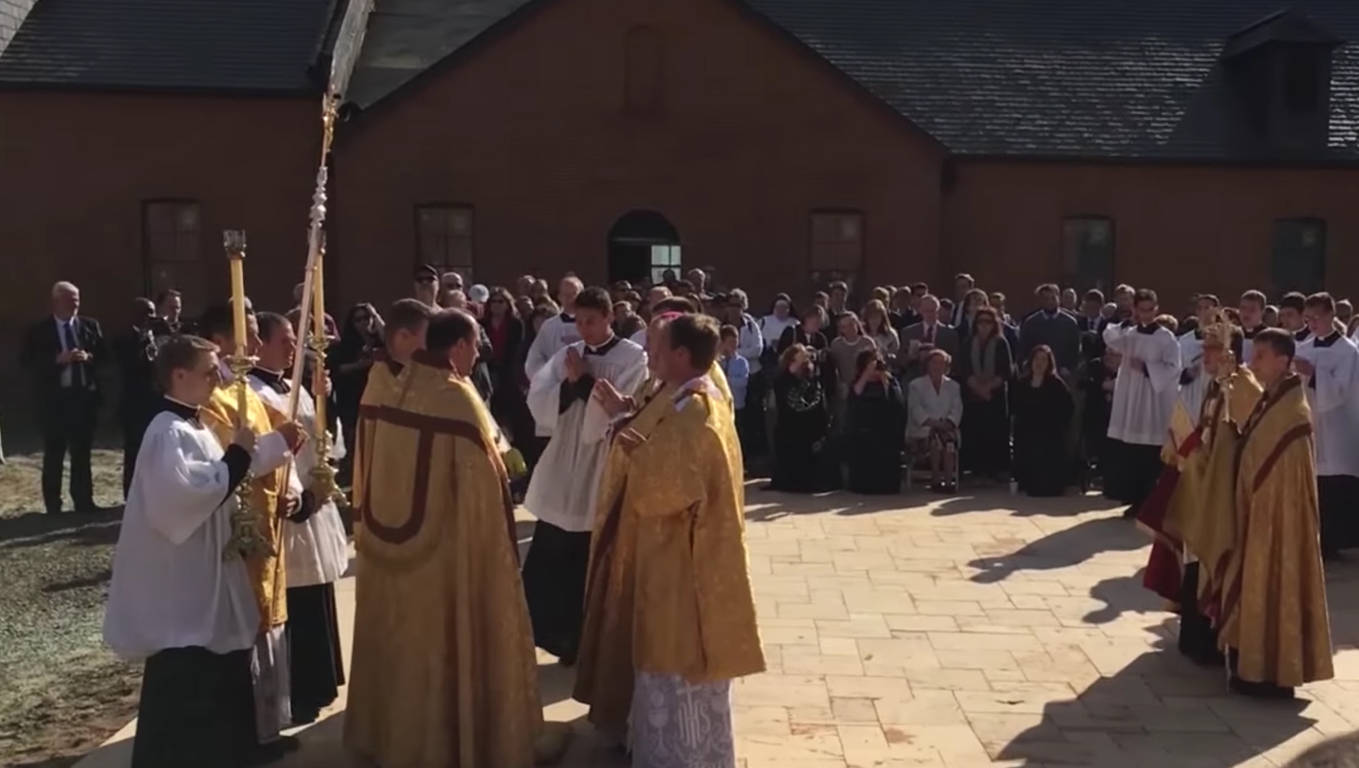 As we’ve pointed out many times, the SSPX is a deception.  Yes they have externals, and it is through their externals that they convince many that they are of God, but they don’t have the true faith.  They reject the Church’s dogmatic teaching on salvation, and they obstinately adhere to heretical, anti-papal, anti-magisterial positions.  They simply don’t profess what the Catholic Church professes.  They are not true Catholics.  They are very similar to the Eastern ‘Orthodox’ and the ‘Old Catholics’.  That’s why the vast majority of the SSPX’s followers aren’t interested in the magisterial teaching of councils, bulls, and encyclicals that contradicts their positions.  They don’t care about that because they don’t believe in councils, bulls, and encyclicals.  Rather, what they care about – their ‘rule of faith’ – is externals, rituals, and community.  If they have externals, rituals, and community, that’s all they need.  Quoting Catholic dogma to the vast majority of the SSPX’s followers is like quoting it to adherents of Eastern ‘Orthodoxy’.  It won’t faze them.  They don’t believe in it, so they don’t care that their position is incompatible with it.

The SSPX’s ongoing recognition of the notorious apostate Antipope Francis as a Catholic pope is just one clear example of the group’s rejection of Jesus Christ and the Catholic faith.  The SSPX also explicitly teaches that souls can be saved in false religions – a blatant denial of the defined dogma Outside the Catholic Church There Is No Salvation.  Bishop Fellay, for instance, has explicitly stated that Hindus can be saved.

Bishop Bernard Fellay, Conference in Denver, Co., Feb. 18, 2006: "Consider a Hindu in Tibet who has no knowledge of the Catholic Church.  He lives according to his conscience and to the laws which God has put into his heart.  He can be in the state of grace, and if he dies in this state of grace, he will go to heaven.” (The Angelus, “A Talk Heard Round the World,” April, 2006, p. 5.)

Lefebvre also taught that souls can be saved in false religions (Against the Heresies, pp. 216-218).  The SSPX professes and teaches that souls can be saved in false religions, as our material documents.  The Catholic Church professes the opposite.  In this sermon, Fellay even stated that aborted infants can go to Heaven without baptism - another blatant heresy (11 to 12 min. mark: http://sspx.org/en/media/audio/bp-fellays-sermon-2016-dc-march-life-13572).  The SSPX does not profess the true faith.  Their priests are not true believers, but heretics.  They have no faith whatsoever.  That’s why their vocations and their numbers are a deception.  Good fruits are, first and foremost, when people receive the true faith of Christ without which one cannot please God (Heb. 11:6).  The SSPX doesn’t have the true faith.  Their priests and seminarians don’t have the true faith, and they don’t spread it to others.  Rather, they teach people heresy and schism, along with some Catholic truth.  When you encounter or get to know obstinate adherents of the SSPX, and examine what they actually believe, you discover that the SSPX’s fruits are, in fact, rotten.  The SSPX is like an apple that looks good and fresh on the outside, but is rotten on the inside.  Even though the SSPX does some good things, and has been an avenue through which people have been led to the truth, on the whole their group constitutes a major deception.

FELLAY'S INJURY AT THE NEW SEMINARY

During the opening weekend of their huge new seminary, their apostate leader, Bishop Bernard Fellay, allegedly fell down the steps and broke his leg in two places.  The SSPX has confirmed that during the inaugurating weekend of the seminary, Fellay “injured his foot quite badly”.  They acknowledge:

“However, not all the news from Virginia was happy this weekend, as the Superior General, Bishop Fellay, injured his foot quite badly.  We ask for your prayers that he recovers well, and completely.”  (http://www.sspx.org/en/news-events/news/report-new-sspx-seminary-va)

When one considers that the SSPX is not truly Catholic, and that Fellay is a heretical false guide who leads people to Hell, the symbolism is, we must say, quite fitting.  The SSPX’s new seminary represents the priestly formation of the SSPX.  This massive $40 million structure is one of the biggest projects in the history of the SSPX, if not the biggest.  They had announced months in advance when the seminary would be inaugurated and that Fellay would be there to bless it.  Fellay and over 1000 supporters of the SSPX showed up.  Falling and suffering a significant injury during the inaugurating weekend of the new seminary is not just a coincidence.  It's a symbol of the false guidance of the SSPX, which leads people to destruction.  That’s not to suggest, of course, that everyone who suffers an injury is evil or being punished by God.  However, when you consider who fell, where he fell, and when he fell, it’s obvious that this was a merciful sign from God.  God wants the followers of the SSPX to wake up and realize that Fellay and the SSPX should not be followed, a fact that Catholic truth makes quite clear.

It’s certain that Fellay suffered a significant injury at the new seminary, and it was serious enough for the SSPX to make a statement about it.  The phrase “injured his foot quite badly” is probably the SSPX’s euphemistic way of reporting that Fellay fell down the steps and broke his leg.  The latter obviously sounds much worse than the former. 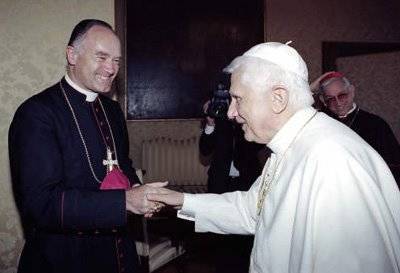 The Society of St. Pius X [Link to Section]

The Society of St. Pius X (SSPX) to receive 40 million dollars for their heretical seminary project