Any "priest" or person who allows such abominations is probably hiding his own abominable "lifestyle". Many people, especially "LGBTQ", claim they are not trying to force sex or their sexual life on anyone. But… they are only trying to normalize lust and its different parts. So, yes, their agenda is only about corruption.

St. Thomas, Summa Theologiae: "Just as the ordering of right reason proceeds from man, so the order of nature is from God Himself: wherefore in sins contrary to nature, whereby the very order of nature is violated, an injury is done to God, the Author of nature. Hence Augustine says (Confess. iii, 8): "Those foul offenses that are against nature should be everywhere and at all times detested and punished, such as were those of the people of Sodom, which should all nations commit, they should all stand guilty of the same crime, by the law of God which hath not so made men that they should so abuse one another. For even that very intercourse which should be between God and us is violated, when that same nature, of which He is the Author, is polluted by the perversity of lust."

Your older video: Examples Of Bad Will On Vatican II And More is perfectly accurate in the description of bad will so common in society, one’s family, etc. There is no reasoning with dishonest people- it seems especially so when dealing with one’s family.

Seeing that there is no way to flee from the Almighty, we turn round and flee to You, the Almighty. -Saint Augustine

Thank you for your commitment to tearing down lies and building up the truth. May God keep you! 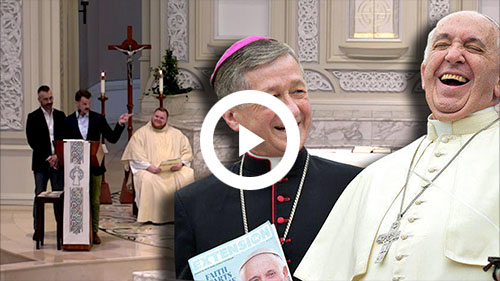 I live in Sacramento and work security here. This is pretty accurate.