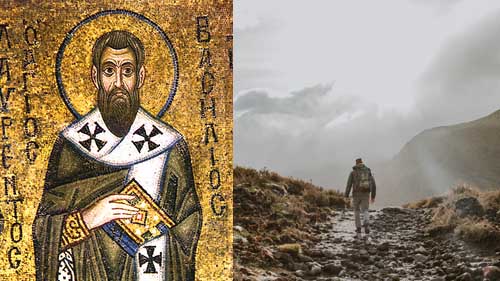 St. Basil, Letter 42, 4th century: “So we hear from Ezekiel teaching as it were in the name of the Lord, when he says, if the righteous turns away and commits iniquity, I will not remember the righteousness which he committed before; in his sin he shall die, and so too about the sinner; if he turns away from his wickedness, and do that which is right, he shall live. Where were all the labors of God's servant Moses, when the gainsaying of one moment shut him out from entering into the promised land? What became of the companionship of Gehazi with Elisha, when he brought leprosy on himself by his covetousness? What availed all Solomon's vast wisdom, and his previous regard for God, when afterwards from his mad love of women he fell into idolatry?... Learn then, brother, that it is not he who begins well who is perfect. It is he who ends well who is approved in God's sight.”

… this website… has helped me tremendously over the years…

The gall and absolute ignorance of her to pose before a crucifix and portrait of Our Lady of Guadalupe.