I recently stumbled across this very scandalous online event that occurred in a Novus Ordo “parish” under the “Archdiocese” of Jakarta in Indonesia back in April 2021. This “parish” led a “prayer” and discussion session with “Catholic transwomen”. 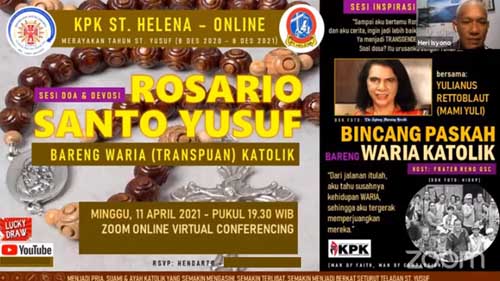 Above is the image of the event (I removed the url originally displayed). You can’t make this up. First, on the top left hand corner, you can see the logo of the “Archdiocese” of Jakarta, the country’s capital. The logo is present during a large portion of the video. So this seems to have been endorsed by the “Archdiocese”.

Second, in the middle it says the following:

Third, they recognize this man as a woman. It says on the right hand side:

“Mami” being a term of endearment for these men pretending to be women, which means “Mom” or “Mother”.

Fourth, in the lead-up to the session, the presenter said the following (4m50s-5m15s):

"... in our event, the Catholic Men Community of St. Helena of the Curug Parish [under the "Archdiocese" of Jakarta]. Today we will say the prayer of the St. Joseph chaplet... with our friends and family, Catholic transwomen.”

So this “parish” acknowledges these sick men to be their “friends and family”. In the Vatican II Sect, not only are you going to be in communion with heretics and schismatics, but you’ll also be in communion with individuals who think that one can have a different gender from what one was given by God.

They also have a discussion session with those “transwomen” led by a “religious”.

This should really wake up all of the people in the Vatican II Sect that they are not in the Catholic Church, but rather in a Counter Church led by Satan’s tools, as MHFM has repeatedly explained. This “LGBT” proliferation in the Novus Ordo is not just in the U.S. or Europe, but it can most definitely happen in any country.