I have a question regarding John Paul's bent cross that he carries.  I heard that it was a satanic symbol.

Appreciate your ministry and God Bless You,

Doris, You are absolutely correct. Paul VI and John Paul II have both carried a symbol which few have understood - the sinister bent or broken cross on which the body of Christ is displayed as a repulsive or distorted figure. Satanists in the fifth and sixth centuries, as well as black magicians and sorcerers in the Middle Ages, used such figurines to represent their hatred for Christianity. The Museum of Witchcraft in Bayonne, France has woodcuts of symbols used in the black mass and witch Sabbath of the Middle Ages in which the broken cross was used as the symbol of the Antichrist. (source: The Broken Cross by Piers Compton) 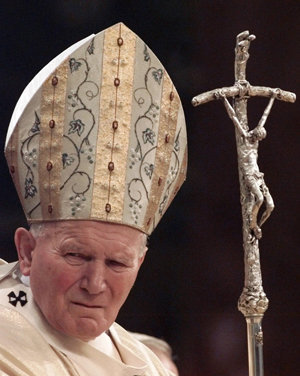