Benedict XVI, April 14, 2008, Message from the Vatican to the Jewish community on the feast of Pesah: “My visit to the United States offers me the occasion to extend a warm and heartfelt greeting to my Jewish brothers and sisters in this country and throughout the world. A greeting that is all the more spiritually intense because the great feast of Pesah is approaching. ‘This day shall be for you a memorial day, and you shall keep it as a feast to the Lord; throughout your generations you shall observe it as an ordinance forever. (Ex. 12:14)… At this time of your most solemn celebration, I feel particularly close… At the Passover Seder you recall the holy patriarchs Abraham, Issac and Jacob, and the holy women of Israel… Our Easter and your Pesah, while distinct and different, unite us in our common hope centered on God and his mercy. They urge us to cooperate with each other and with all men and women of goodwill to make this a better world for all as we await the fulfillment of God’s promises.” [1]

Benedict XVI, April 17, 2008, after a meeting with representatives of other religions, Benedict XVI met briefly with members of the Jewish community and gave them a message: “My dear friends, I extend special greetings of peace to the Jewish community in the United States and throughout the world as you prepare to celebrate the annual feast of Pesah. My visit to this country has coincided with this feast, allowing me to meet with you personally and to assure you of my prayers as you recall the signs and wonders God performed in liberating his chosen people. Motivated by our common heritage, I am pleased to entrust to you this Message as a testimony to our hope centered on the Almighty and his mercy.”[2]

Benedict XVI, April 18, 2008, Address at the East Park Synagogue after receiving the tribute of Rabbi Arthur Schneider: “Dear Friends, Shalom! It is with joy that I come here, just a few hours before the celebration of your Pesah, to express my respect and esteem for the Jewish community in New York City… I thank Rabbi Schneier for his words of welcome and I particularly appreciate your kind gift, the spring flowers and the lovely song that the children sang for me. I know that the Jewish community make a valuable contribution to the life of the city, and I encourage all of you to continue building bridges of friendship with all the many different ethnic and religious groups present in your neighborhood. I assure you most especially of my closeness at this time, as you prepare to celebrate the great deeds of the Almighty and to sing the praises of Him who has worked such wonders for his people. I would ask those of you who are present to pass on my greetings and good wishes to all the members of the Jewish community.   Blessed be the Name of the Lord!”[3] 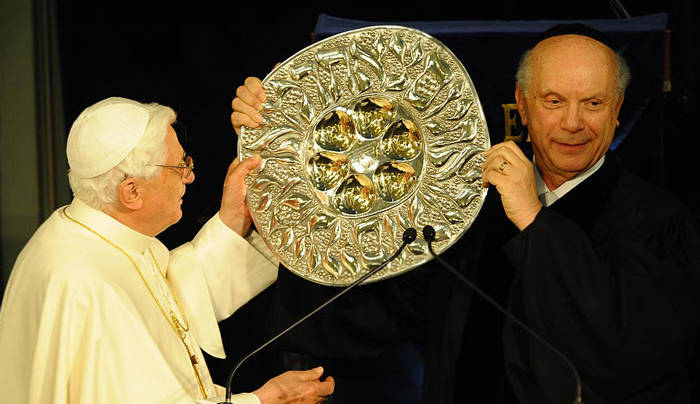 Benedict XVI esteems and praises the Jews for celebrating their false religion. Benedict XVI speaks of “Catholics” and Jews “common hope centered on God.” Therefore, according to Benedict XVI, the practice of Judaism is “centered on God.” So much for Jesus Christ, according to the apostate Benedict XVI. Benedict XVI states that “as we [Jews and “Catholics”] await the fulfillment of God’s promises.”   Benedict also says: “It is with joy that I come here [the synagogue], just a few hours before the celebration of your Pesah, to express my respect and esteem for the Jewish community...” Benedict also assures the Jews of his “closeness at this time as you prepare to celebrate”[Judaism!]. These speeches again demonstrate Benedict XVI’s apostasy. Anyone who thinks that Benedict XVI doesn’t esteem Judaism and Jews who reject Jesus Christ is simply a liar.

Pope Eugene IV, Council of Florence, 1441, ex cathedra: “The Holy Roman Church firmly believes, professes and teaches that the matter pertaining to the law of the Old Testament, the Mosaic law, which are divided into ceremonies, sacred rites, sacrifices, and sacraments… after our Lord’s coming… ceased, and the sacraments of the New Testament began… All, therefore, who after that time (the promulgation of the Gospel) observe circumcision and the Sabbath and the other requirements of the law, the holy Roman Church declares alien to the Christian faith and not in the least fit to participate in eternal salvation.”

Pope Benedict XIV, Ex Quo Primum (# 61): “The first consideration is that the ceremonies of the Mosaic Law were abrogated by the coming of Christ and that they can no longer be observed without sin after the promulgation of the Gospel.”

Pope Pius XII, Mystici Corporis Christi (#’s 29-30), June 29, 1943: “And first of all, by the death of our Redeemer, the New Testament took the place of the Old Law which had been abolished… on the gibbet of His death Jesus made void the Law with its decrees [Eph. 2:15]… establishing the New Testament in His blood shed for the whole human race. ‘To such an extent, then,’ says St. Leo the Great, speaking of the Cross of our Lord, ‘was there effected a transfer from the Law to the Gospel, from the Synagogue to the Church, from many sacrifices to one Victim, that, as our Lord expired, that mystical veil which shut off the innermost part of the temple and its sacred secret was rent violently from top to bottom.’ On the Cross then the Old Law died, soon to be buried and to be a bearer of death…”