The WikiHow website, a hub for how-to information, has joined the other evil tech giants by going all-in with vaccine propaganda that poses a very real danger to the health and safety of children. The site now features a dangerous article that teaches children how to scheme against their own parents and stage fake cover stories to get vaccinated with toxic vaccines that even the U.S. government admits cause thousands of injuries, hospitalizations and even some deaths every year in America. (VAERS.HHS.gov and HRSA.gov) The WikiHow article, entitled, “How to Get Vaccinated Without Parental Consent,” begins by warning children that their parents might “fall into rabbit holes of conspiracy theories” about vaccines, falsely implying that all evidence of vaccine dangers or vaccine injuries is a “conspiracy.” The article appears at this link: https://www.wikihow.com/Get-Vaccinated-Without-Parental-Consent The article goes on to teach children how to “get vaccinated in secret” and claims that anti-vaccine parents might “abuse you if they learned that you disobeyed them.” (These are actual quotes from the WikiHow article.) Here’s a screen shot from the article itself: 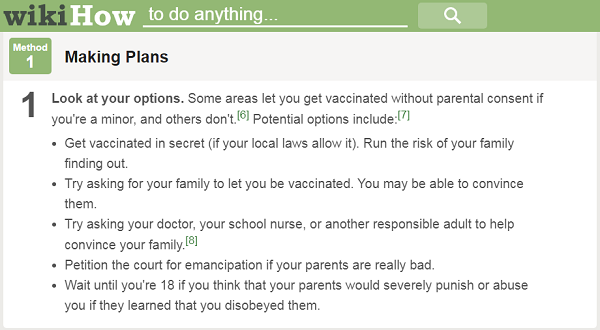 The article also implores children to recruit doctors “or another responsible adult” to coerce parents into allowing unlimited vaccinations, implying that only those adults who promote vaccines are “responsible.” This is yet more clear evidence that the article was written by the same group of Big Pharma propagandists who have taken over Wikipedia, too. Many vaccines — including vaccines that contain mercury — are never tested for safety in pediatric patients (children and teens), yet it is exactly those children who are being targeted by WikiHow in one of the most dangerous and brazen assaults on parental rights and child safety that has ever been hosted by any tech platform. See the stunning photos, below, showing the actual insert sheet of a popular flu vaccine for more proof. This article is so dangerous to public health that WikiHow deserves to be sued by parents and criminally investigated for publishing it. U.S. government confirms billions have been paid out to families of vaccine injured children – an irrefutable fact denied by WikiHow In truth, vaccine insert sheets openly admit that vaccines are dangerous and, in most cases, never even subjected to clinical trials for safety or effectiveness. These damning facts about vaccine safety are never mentioned by WikiHow. The so-called “Secret Vaccine Court” (the National Vaccine Injury Compensation Program) has already paid out over $4 billion to families of vaccine-injured children, and more claims are filed each year. That program publishes a “vaccine injury table” that lists some of the many injuries known to be caused by vaccines. The program also reveals that, as of 2019, over $4 billion has been paid out to families of vaccine-injured children: Since 1988, over 21,491 petitions have been filed with the VICP. Over that 30-year time period, 18,473 petitions have been adjudicated, with 7,044 of those determined to be compensable, while 11,429 were dismissed. Total compensation paid over the life of the program is approximately $4.2 billion. A detailed PDF report published by the National Vaccine Injury Compensation Program lists the influenza vaccine as responsible for 3,647 of the injury petitions, and the MMR vaccine responsible for 252 petition. The Tdap vaccine accounts for another 470 petitions. The report reveals that more petitions were filed in 2019 than in almost any other year in the program’s existence, demonstrating that vaccines are trending toward causing more injury, not less. The WikiHow article tries to brainwash children into thinking that vaccines are universally safe and effective when, in reality, vaccine manufacturers openly admit their vaccines are backed by no real science at all. For example, the Flulaval vaccine insert sheet, detailed in this Natural News article, reveals that no controlled trials have been conducted that show the flu shot results in any decrease whatsoever in influenza infections:

The highlighted text reads, “…there have been no controlled trials adequately demonstrating a decrease in influenza disease after vaccination with FLULAVAL.” Furthermore, that same insert sheet openly admits that the safety of the flu shot — which contains mercury — has never been established in children. Notably, this is the exact same demographic being targeted by WikiHow in their article that attempts to convince children to lie to their parents and get secretly vaccinated with toxic vaccines that may quite literally kill them:

“Safety and effectiveness of FLULAVAL in pediatric patients have not been established.” “FLULAVAL has not been evaluated for carcinogenic or mutagenic potential, or for impairment of fertility.” “Thimerosal, a mercury derivative, is added as a preservative. Each … dose contains 50 mcg thimerosal. Each dose may also contain residual amounts of ovalbumin, formaldehyde, and sodium deoxycholate from the manufacturing process.” WikiHow implores children: “You are allowed to lie to your parents” by using a “cover story” In step 3 of the WikiHow scheme for children to deceive their parents and get vaccinated without parental consent, the site urges children to lie to their parents: You are allowed to lie to your parents if it’s the only way you can get the information you need to protect your health. Later, you can say that you researched it and realized you don’t have a vaccine injury. Of course, the WikiHow article fails to tell the reader that getting vaccinated may cause them to end up with paralysis, a coma or death, all of which would prohibit them from being able to explain later that “you don’t have a vaccine injury.” (Children killed by vaccines are unable to talk about their vaccine injuries, it turns out.) The WikiHow article also proposes various lies that children and teens can use on their parents, saying, “If your parents are distrustful, prepare your cover story especially well.” Young readers are urged to literally stage a fake photo shoot of their “cover story” activity so they can prove to their dangerous, distrustful parents that they actually participated in that activity rather than being vaccinated. From the WikiHow article: If your parents are distrustful, prepare your cover story especially well. Try actually doing your cover story activity on a different day, and even taking a selfie doing that thing with your friend. This way, you’ll have “evidence” of doing it, and can answer questions if they quiz you. The blatant propaganda article by WikiHow blatantly seeks to turn children against their own parents while surrendering to the “vaccine state” which systematically lies to the public about the safety or efficacy of vaccines. The WikiHow article names no authors and says it was written by anonymous contributors, most of whom no doubt work for the vaccine industry itself.