An undercover police officer was arrested Tuesday after allegedly lying to police about his involvement in the Sept. 29 motorcycle mob and subsequent attack of an SUV driver in New York City.

According to WABC-TV, the undercover officer, 32-year-old Wojciech Braszczok, was charged with riot and criminal mischief. The veteran detective originally told police he didn't arrive on the scene until after the attack on Alexian Lien took place. However, video viewed by the NYPD told a different story, according to NBC New York and the Daily News. In the video, the undercover officer can be seen banging on the rear window of the Range Rover, unnamed police sources told NBC. "It shows him punching the back window," another unnamed source told the Daily News of the new footage reviewed by investigators on Monday. "And then as the camera is moving it catches him maybe throwing a kick at the side of the car." After Lien was pulled from the SUV by the bikers, the undercover officer is then seen riding away. Lien was then beaten in front of his wife and daughter by the bikers, who had followed the vehicle up the West Side Highway after it clipped one of their fellow cyclists. 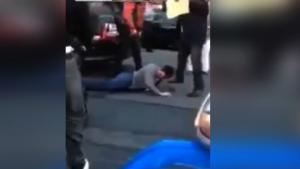 NYPD Commissioner Ray Kelly said the officer, who waited several days before coming forward, had been placed on modified duty pending the outcome of an internal investigation. Tuesday afternoon he turned himself in and was taken to Manhattan Central Booking. to read more click here: news.yahoo.com