21stcenturywire.com With all of the 24/7 righteous indignation about weapons of mass destruction in Syria and call for ‘compliance with international norms’, the mainstream media barely mentioned this week’s UN vote on whether or not Israel should enter the international community by allowing nuclear weapons inspectors to see what its been hiding for decades now – a full-blown nuclear weapons program. 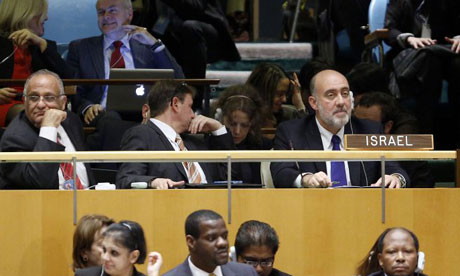 Hiding a military nuclear arsenal is no small feat. What this latest US-led lobbying effort in the UN demonstrates clearly, is that the State of Israel, shielded by its chief backers the United States, Great Britain and France, maintains its own set of rules outside of international laws and norms. One might ask the question: does Israel plan to use its nukes on any other countries? If not, why does it need to maintain them, and in secret? Along with the US, Israel has already threatened to attack Iran on the basis that Iran might, one day, build a nuclear weapon. Both the US and Israel say this would be a “pre-emptive strike” - just in case Iran might attack Israel at some point in the future, even though Iran, unlike Israel, has no history of aggression against any of its regional neighbors. In fact, the State of Israel was founded upon unwarranted aggression, terrorist bombings and ethnic cleaning programs targeting native Palestinian Arabs who previously lived within its ever-expanding borders. This is the definition of a triple standard... to read more click here: 21stcenturywire.com