news.yahoo.com Istanbul (AFP) - Turkey on Tuesday formally opened the world's first sea tunnel connecting two continents, fulfilling a sultan's dream 150 years ago in a three-billion-euro mega project driven by the Islamic-rooted government. The 13.6-kilometre (8.5 mile) long tunnel linking Istanbul's European and Asian sides includes an immersed tube tunnel which officials say is the world's deepest at 60 metres (nearly 200 feet) below the seabed. The inauguration of the ambitious scheme -- dubbed "the project of the century" by the government -- coincides with the 90th anniversary of the founding of modern Turkey. "Turkey will celebrate two feasts together," Transport Minister Binali Yildirim said earlier this month. "We will mark the 90th anniversary of the republic on October 29 and also realise a one-and-a-half century dream of a major rail tunnel project in Istanbul." 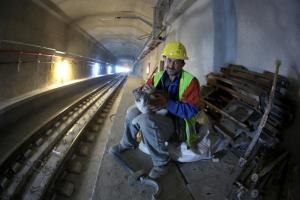 A worker holds a cat in the Marmaray Tunnel under the Bosphorus on April 18, 2013, in Istanbul (AFP  … The tunnel in the country's main gateway city is part of a larger "Marmaray" project that also includes an upgrade of existing suburban train lines to create a 76-kilometre (47-mile) line that links the two continents. to read more click here: news.yahoo.com