Facing a rise in mass shootings and incidents of terrorism, improving safety has become a top concern for police departments across the nation. But does that mean a state university really needs a bomb-proof, 13-ton SUV?

It's not just the police department at Ohio State University. The Dallas County Sheriff's Office has taken delivery of its $600,000 bombproof fortress, along with another one delivered toMurfreesboro Police Department in Tennesse. And thanks to a Pentagon program, many of these trucks that once roamed the Middle East will soon be patrolling American streets.

With the Iraq war over and Afghanistan close behind, there aren't many uses for some 20,000 mine-resistant, ambush protected (MRAP) vehicles the Department of Defense developed and built for billions of dollars. Able to withstand ballistic arms fire, mine blasts and improvised explosive devices, the V-shaped hull deflects incoming blasts. The original plan was to leave the trucks valued at more than $600,000 apiece in a warehouse, but in an effort to maximize the vast dollars invested, the Pentagon decided they should return stateside to fight the never-ending war on crime. 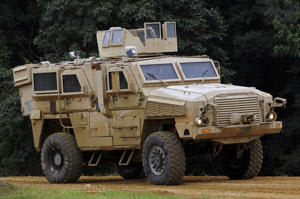 Given that the verdant fields of Columbus, Ohio, hasn't been plagued by mine fields or roadside bombs of late, it begs the question as to the necessity of keeping an MRAP on campus. School officials have said their new truck — specifically, the Navistar MaxxPro MRAP — could be used for natural disasters like tornadoes, or for shootings or bomb threats, noting that the Columbus police force doesn't have a bomb squad, and that it's up to them to be prepared.

Murfreesboro Councilman Toby Gilley said that its police department planned to employ the MRAP as a tool in "threats from armed gunmen," reiterating that it came at no cost to the community.