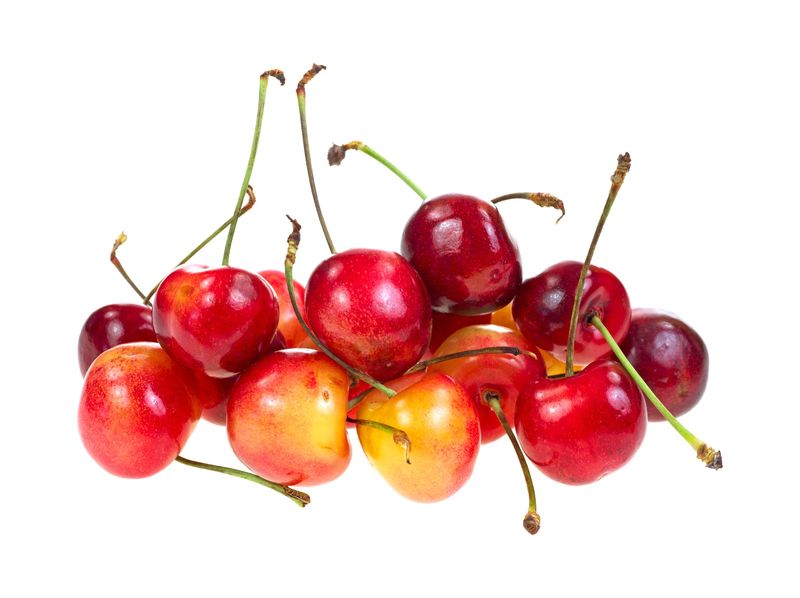 If you are among the millions of Americans suffering from joint pain and arthritis, there's good news about a favorite summer treat. According to research from Oregon Health & Science University, tart cherries help reduce the chronic inflammation that leads to pain.[1] In fact, the Oregon researchers declared that tart cherries have the "highest anti-inflammatory content of any food" and can help osteoarthritis patients manage their condition. The study specifically dealt with tart cherries (e.g., Montmorency and Balaton) and not sweet cherries (e.g., Bing, Lambert, Rainier), although both varieties have healing benefits. Tart cherries are grown mostly in Michigan while the sweet varieties are found mostly in Washington, Oregon and Idaho. Both types have traditionally been used to combat gout by reducing the body's levels of uric acid. Tart cherries, however, have higher concentrations of phenolics and anthocyanins.  These compounds have been specifically linked to high antioxidant capacity and reduced inflammation. A 2001 cell study found that anthocyanins from cherries were as effective as ibuprofen andnaproxen at suppressing the COX enzymes associated with inflammation. In this study, 20 women aged 40 to 70 with inflammatory osteoarthritis drank tart cherry juice twice a day for three weeks. At the end of the trial, researchers found significant reductions in important inflammation markers – especially for women who had the highest inflammation levels at the start of the study. The study authors noted that the results were promising for cherries as a natural pain reliever without the side effects associated with arthritis medications. In a prior study, the same researchers found that people who drank tart cherry juice while training for a long distance run reported significantly less pain after exercise.  The Sports Nutrition Department at the University of Pennsylvania Medical Center for Sports Medicine has incorporated tart cherries into the training menu of professional athletes and active clients as a natural and easy way to manage pain. Other studies on tart cherries and osteoarthritis conducted by researchers at Baylor Research Institute[2] found that a daily dose of tart cherry extract helped reduce osteoarthritis pain by more than 20 percent. Tart Cherries Beat Prescription Actos for Heart Benefits Mother Nature also used tart cherries to teach the drug companies a lesson. Tart cherries, it turns out, are better for you than a class of drugs designed to reduce the risk of heart disease and diabetes. According to study from the University of Michigan Health System, tart cherries provide the same cardiovascular benefits as a class of drugs called PPAR agonists which help regulate fat and glucose. PPAR agonists are prescribed for patients with metabolic syndrome – a constellation of risk factors linked to heart disease and type 2 diabetes. But here's the best part. Tart cherries don't increase heart disease and stroke risk as PPARs can. Studies show that long-term use of PPAR agonists increase stroke risk so much that many of the drugs have failed to get FDA approval. But some have. Research from the University of Michigan Cardioprotection Research Laboratory[3] found that, compared to Actos (pioglitazone), a PPAR agonist, tart cherries lowered blood pressure and the risk of stroke, even when taken with the drug. The research results were presented at the Experimental Biology 2013 meeting in Boston. In previous research the same group of scientists had shown that eating Montmorency tart cherries triggers the same PPAR benefits as the drugs in many of the body's tissues. The researchers believe that anthocyanins -- the pigments that give the fruit its dark red color -- may be responsible for PPAR activation. Other foods that are rich in anthocyanins include black berries, plums, grapes, wine, pomegranates, asparagus, red cabbage, and black beans. According to the Cherry Marketing Institute, a producers association, there are now more than 50 scientific studies on the health benefits of cherries.  Studies have documented a long list of tart cherry health benefits. In particular, tart cherries have been found to: You can get the benefits by drinking tart cherry juice or taking tart cherry extract supplements. But cherries are among the fruits that are heavily treated with pesticides so remember to always buy organic. Tart cherries are in season in spring and early summer, so enjoy them fresh when you can. A handful a day keeps the doctor away – no prescription needed.