Rana Moussaoui AFP Syria said Wednesday it was mobilising its allies against a possible US-led military strike over a suspected gas attack and would never give in, even if a third world war erupts. In an exclusive interview with AFP, Deputy Foreign Minister Faisal Muqdad said Syria had taken "every measure" to retaliate against a potential strike, but refused to provide any clue as to what that might mean. He also insisted that Russia had not wavered in its support for its long-time ally, despite comments by President Vladimir Putin suggesting a more conciliatory tone towards the West. "The United States is currently mobilising its allies for an aggression against Syria," he said, adding that Damascus was therefore doing the same and that its allies were "offering it all sorts of support." "Iran, Russia, South Africa and some Arab countries have rejected this aggression and are ready to face this war that the United States and its allies, including France, will declare against Syria", he said, without elaborating. 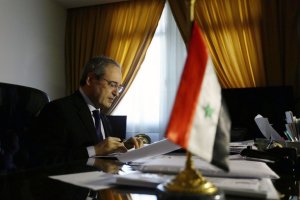 "The Syrian government will not change position even if there is World War III. No Syrian can sacrifice the independence of his country."