"If you were on Twitter back when the COVID 'fear mongering' was at its peak, you’ll likely remember the 'Twitter doctors' who popped up, seemingly out of thin air, claiming they were losing hordes of patients to COVID every single day.

These so-called 'doctors' whipped everyone into a fear frenzy. Their tweets would get tens of thousands of retweets and engagement daily.

The 'doctors' posed as ER physicians and were part of the LGBTQ community in some way. They created this hellish/apocalyptic scenario that made it sound as if bodies were piling up in the streets.

Well, this probably won’t come as a huge surprise to you, but those popular 'ER doctors' were fake.

Last month, Dr. Robert Honeyman lost their sister to Covid. They wrote about it on Twitter and received dozens of condolences, over 4,000 retweets and 43,000 likes.

Exactly one month later, on Dec. 12, Honeyman wrote that another tragedy had befallen their family.

'Sad to announce that my husband has entered a coma after being in hospital with Covid. The doctor is unsure if he will come out,' they tweeted. 'This year has been the toughest of my life losing my sister to this virus. This is the first time in my life I don’t see light at the end of the tunnel.'

Again, the condolences and well-wishes rolled in. But there was a problem: Honeyman wasn’t real.

The transgender 'Doctor of Sociology and Feminist studies' with a 'keen interest in poetry' who used they/them pronouns was, in fact, a stock photo described on DepositPhotos, a royalty-free image site, as 'Smiling happy, handsome latino man outside—headshot portrait.'

Their supposedly comatose husband, Dr. Patrick C. Honeyman, was also fake. His Twitter photo had been stolen from an insurance professional in Wayne, Indiana...

But this wasn’t just a 'one-off' situation. This was part of a much bigger effort – a mini network – created to stoke fear over COVID-19.

The two fake doctors, whose accounts urged extreme caution about Covid-19, were part of a network of at least four fake accounts that touted their ties to the LGBTQ+ community, vocally advocated for mask-wearing and social distancing, and dished out criticism to those they felt were not taking the pandemic seriously.

The Honeymans could not be reached for comment, as they do not exist. At publication time, Robert Honeyman’s account was no longer active.

The irony here, is that the network of 'Covid fear mongers' was uncovered by a liberal:

The fake doctors were uncovered by Joshua Gutterman Tranen, a self-described 'gay writer' pursuing a master’s of fine arts at Bennington College. He saw Robert Honeyman’s tweet about their husband being in a coma, noticed people he followed also followed them, and thought that they might be part of the LGBTQ+ academic community.

But after 10 minutes of googling, Gutterman Tranen concluded that Robert Honeyman’s photo was a stock image and their biography stretched boundaries of believability: an academic who left no traces on academic websites and had lost two family members to Covid in late 2022, despite masking and distancing.

This was an elaborate network of frauds. 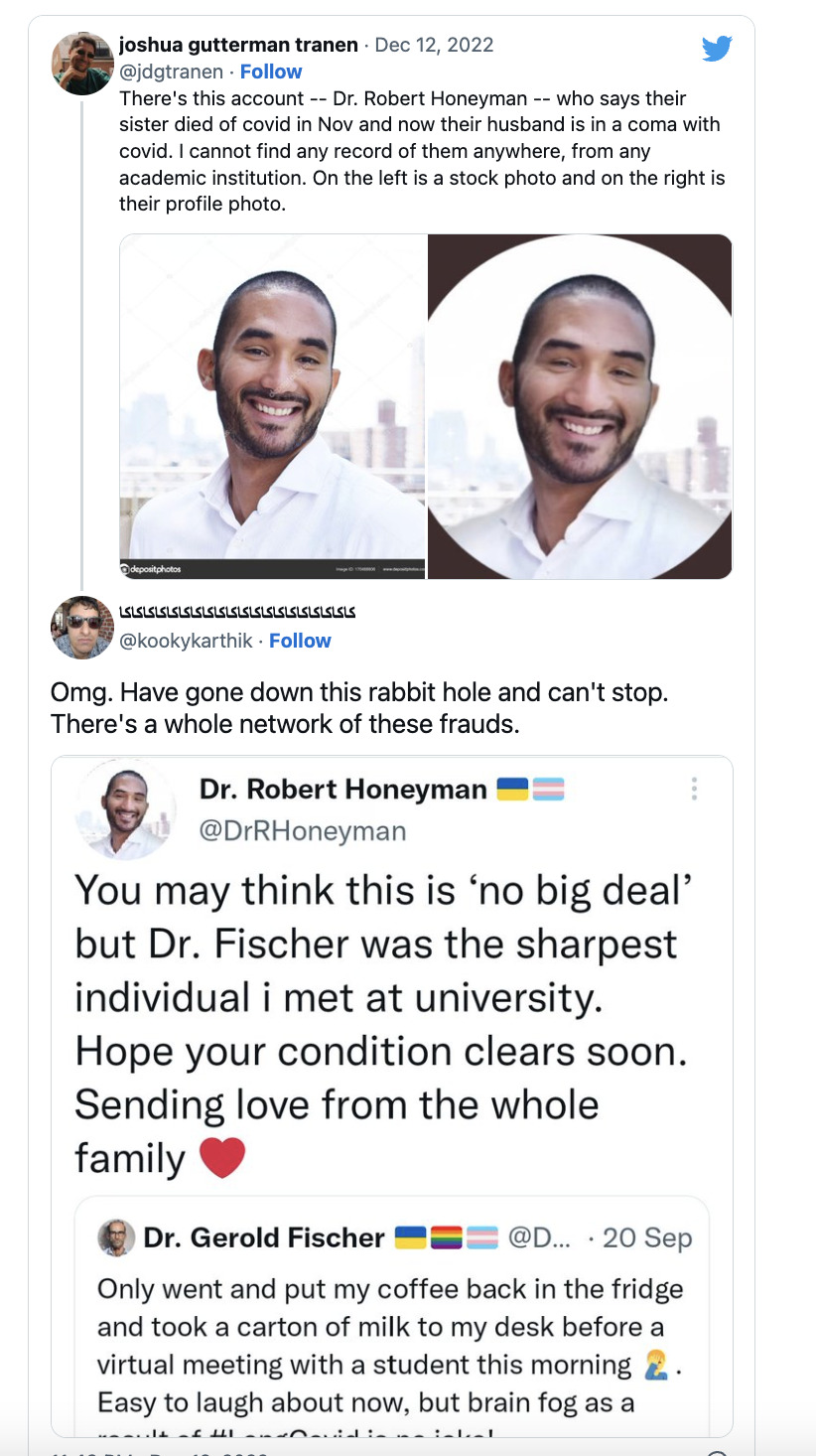 This network pushed mask mandates and even those brutal China-style lockdowns.

All four accounts urged caution about Covid. They also amplified the voices of other Twitter users calling on the public to mask, vaccinate and socially distance. At times, they criticized policies that they felt undermined pandemic safety and individuals who they believed did not take Covid seriously enough.

But as Twitter users responded to Gutterman Tranen’s thread on the Honeymans, they also discovered the accounts expressing views that appeared implausible.

'Come on china! Stop protesting, I wish we had similar lockdown measures here,' Robert Honeyman wrote in a Nov. 27 tweet.

The Standard was unable to establish who created the four fake doctors. But perhaps the most alarming aspect of their nonexistence online is that it is also unclear why they were created.

Could this network of fake doctors be part of a bigger military-grade psyop that was unleashed on the US and the entire world?

At the very least, it was surely a COVID intel op. The million-dollar question now is, who was behind it?"