"A UK clinical psychologist says she’s seeing more trans youngsters than ever, with over half of her teen patients identifying as trans.

The clinical psychologist who preferred to remain unnamed said the spike in trans kids happened after the Covid-19 lockdown periods. 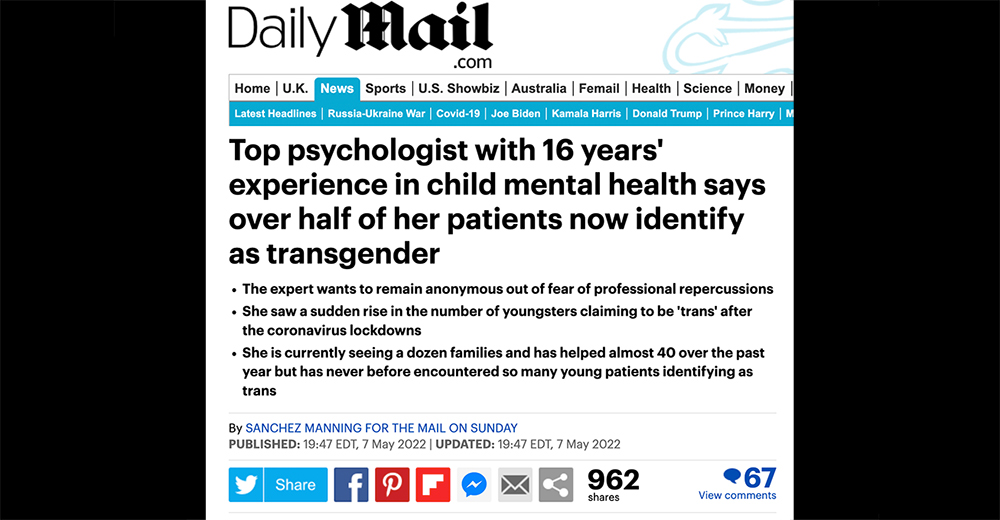 More details from the Daily Mail:

'She is currently seeing a dozen families and has helped almost 40 over the past year but has never before encountered so many young patients identifying as trans.

'In many cases, she said, youngsters now coming to see her with mental anguish or suicidal thoughts had been allowed to transition from one gender to another at a young age, sometimes even at five or six.'

The unidentified psychologist based in Southern England said parents often don’t correlate the mental problems with the gender dysmorphia.

'The parent would be telling me about their teenager, about their mental anguish, suicidal thoughts and self harm, and then they’d drop something in, so casually that I’d almost think I’d missed it, ‘Oh, and he’s a transboy (or girl), transitioned when he (or she) was five (or six or seven), but that’s all fine’,” she wrote in an online article...

The psychologist would not reveal her identity for fear she could be labeled transphobic, or face reprisal from deranged trans lobbyists.

The Mail surmises the rise in teens identifying as trans following the lockdowns raises concerns 'about the impact of online trans ‘influencers’ on youngsters who were largely confined to their homes for months.”