The number of adverse reactions to the Covid jab in Germany is many times higher than previously reported by authorities, an analysis by a major health insurance provider has found.

The analysis of over 10.9 million policyholders was undertaken by BKK Provita after the company observed “diagnoses that indicate side effects of vaccinations,” reads a report by Welt.de. 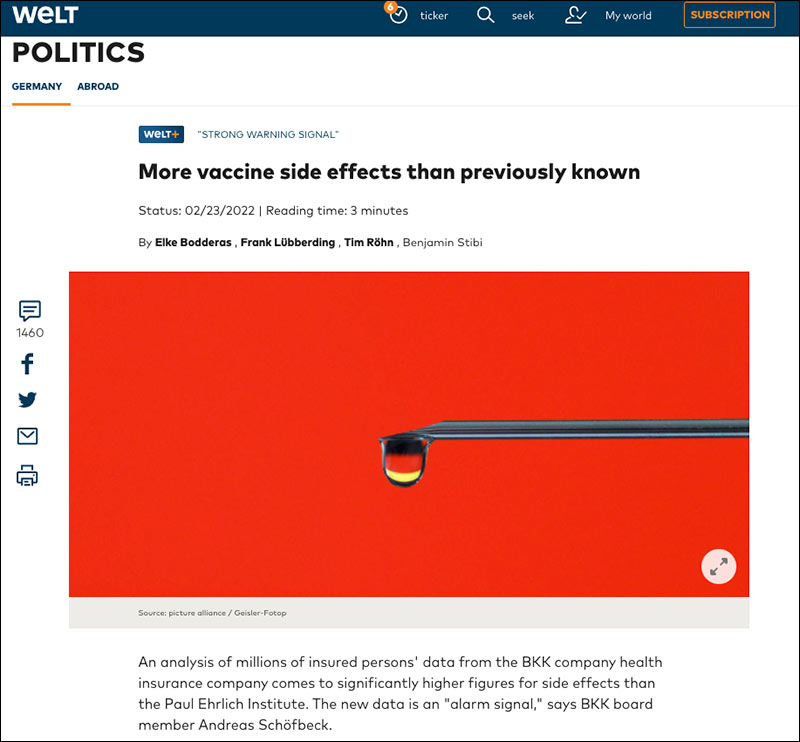 The report goes on to note a staggering 216,695 BKK policyholders were treated for vaccine side effects from the beginning of 2021 to the middle of the third quarter, a total of 7.5 months.

By contrast, the Paul Ehrlich Institute, a branch of Germany’s Federal Ministry of Health, has only documented 244,576 reports of side effects across 61.4 million vaccinated Germans over 14 months.

“Our analysis shows that we are dealing with significant under-reporting,” says BKK CEO Andreas Schöfbeck.

Schöfbeck continues, “According to our calculations, we consider 400,000 visits to the doctor by our policyholders because of vaccination complications to be realistic to this day.”

“Extrapolated to the total population, this value would be three million,” he adds.

One reason for the under-reporting could be due to the complicated process of reporting adverse reactions, Schöfbeck suggests.

“Doctors are not paid to report side effects of vaccinations. At the same time, this process is very time-consuming. It’s simply impossible to report everything,” he says.

A letter from Schöfbeck to Paul Ehrlich Institute President Klaus Cichutek titled, “Strong warning signal for coded vaccination side effects after corona vaccination,” tells the federal agency the reports are “a significant alarm signal that must be taken into account when the vaccines are used further.”

Gert Antes, a medical statistician consulted by Welt, said the info could be a devastating blow to confidence regarding Germany’s vaccine effort.

“The state and the health system have a duty to clarify this situation quickly. The greatest damage that can occur is damage to vaccination readiness,” Antes states.