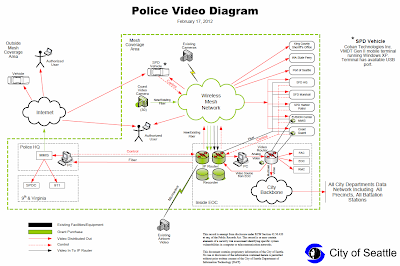 Following bombshell documents released by Storyleak and Infowars last Tuesday uncovering Seattle’s expansive $2.6 million Homeland Security funded mesh network surveillance grid, new documents hidden deep inside the 2012 proposal request (# DIT-2996) give even greater detail into the government’s ability to track and database virtually any person. After local media began questioning the appearance of mysterious “off-white boxes” attached to utility poles in the downtown area, reports uncovered the mesh network devices’ ability to siphon off unsuspecting mobile user’s IP addresses as well as the last 1,000 locations visited. Storyleak and Infowars’ exclusive documents went one step further in revealing the vast amount of local and even federal agencies tied into the network’s information-gathering center. A new file entitled the “Police Video Diagram” proves police officers’ ability to access and control live-video feed from the city’s expansive collection of surveillance cameras, all from the comfort of their police cruisers. PODIAG Although the diagram purports to be exempt from public disclosure, it has been revealed to be publicly available on the Seattle government website, rendering the exemption null and void as confirmed by Storyleak’s legal team. A section of a “specification spreadsheet” also confirms police vehicles’ access to city cameras as well. The upper right-hand corner of the diagram specifies the company which supplied the in-car video viewing screens, Coban Technologies of Houston, Texas. The VMDT (Video Mobile Data Terminal) Gen II, likely capable of audio/video recording any live video feed accessed, was likely tied into the mesh network at a later time as their use dates back to 2007. A lawsuit filed in King County Superior Court by Fischer Broadcasting (Komo 4 News) in 2011 accused Seattle police of breaking state public records law by refusing to release “retained” video recorded with the Coban system. 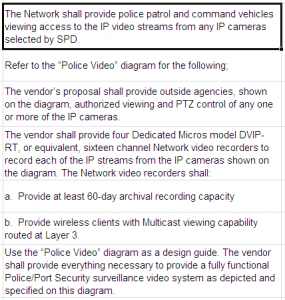 The diagram and spreadsheet give even more validity to our earlier reports that showed multiple agencies having access to all cameras tied into the mesh network. One spreadsheet section asks that “outside agencies shown on the diagram” be given access and control of cameras tied into the mesh network, including the controversial Homeland Security-run Fusion Center, which was labeled a “useless and costly effort that tramples on civil liberties” by the United States Senate. According to a February West Seattle Blog interview with Assistant Police Chief Paul McDonagh, no video footage collected can be kept for more than 30-days unless needed for criminal investigation purposes. The specification spreadsheet proposal asks for “at least 60-day archival recording capacity.” While advanced security is to be expected at Seattle’s port, the mesh network nodes’ data gathering of residents in the downtown area has little to do with maritime security. Given Seattle’s “accidental” port surveillance camera placement earlier this year, which saw several of the city’s 30 port security cameras incorrectly faced in towards the city, few residents trust the government’s alleged claims about personal privacy, especially in light of their refusal to comply with a city ordinance requiring them to have divulged information on the network months ago. Chief McDonagh also said the cameras do not have facial recognition capabilities, although Seattle’s secret participation in the TrapWire program, which used sophisticated facial recognition software ran through city CCTV cameras, leaves the question as to whether the mesh system’s camera access will be run through similar software programs at the whim of unknown federal agencies. to read more click here: storyleak.com