"As I was working on Part V of the 'Marxist Queering of a Catholic University' series concluding our investigation of Marian University (MU), MU President Daniel Elsener issued a formal response to our articles. In the relevant portion of his statement, Elsener said:

Over the past week, an online blog posted missives that grossly mischaracterize Marian University's Catholic Franciscan identity. This group has no official standing with the Church. We are in full communion with the Church and the Sisters of Saint Francis, Oldenburg, Indiana.

If our articles were 'mischaracterizations' as Elsener claims, perhaps he can explain how having a same-sex 'married' dean and other openly homosexual faculty members is in keeping with a Catholic identity. Or maybe he would be willing to show how dogmatic Catholic principles are being upheld by a Catholic university with a plethora of professors who openly promote homosexuality, abortion and Marxism.

Maybe Mr. Elsener could explain how these photographs of Marian University facilities and classrooms promoting homosexuality and videos of an official MU-sponsored event promoting 'queerness' are in keeping with an authentic Catholic identity. One could even expect that Mr. Elsener is able to provide the Catholic teaching that would support the open promotion of homosexuality and transgenderism as found in the displays, paraphernalia and resource guide if MU's Multicultural Center...

Perhaps the most pernicious element on campus is the LGBT Alliance. The Alliance is cataloged on Marian University's list of official student organizations, where its description reads:

The LGBT Alliance aims to educate students, faculty, and community members on the unique healthcare needs of the LGBT population, raise awareness of LGBT issues, facilitate culturally competent communication with LGBT patients, and promote an all-inclusive community at Marian University. Also, the LGBT Alliance welcomes all Marian University students and faculty. We want to reinforce that membership is not limited to only individuals that identify as LGBT, and membership does not imply or require disclosure of sexual orientation.

The LGBT Alliance has hosted several events on campus including an 'LGBTQ Healthcare Equality Lunch'n'Learn' and a presentation on 'Trans Healthcare.'

On Oct. 24, 2017, the Alliance collaborated with several other campus organizations to host what it called 'the Ally Ship' during homecoming weekend. 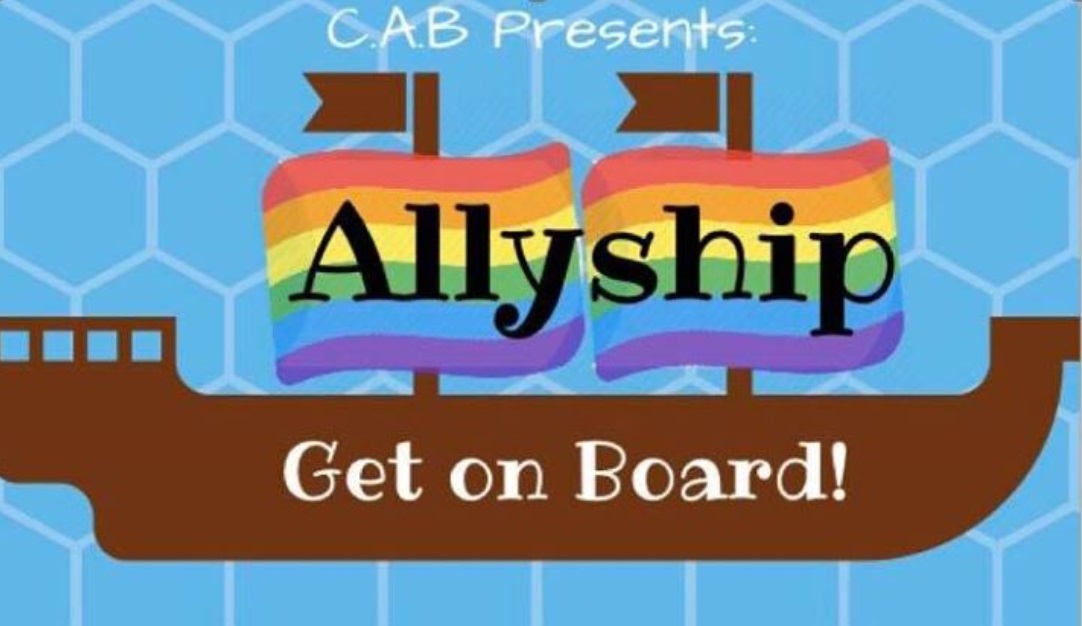 The purpose of the event is to 'focus on ideas of LGBTQIA+ Awareness and Allyship,' claiming to provide biblical and Church teaching on gender and sexuality. In addition to providing 'free rainbow t-shirts,' promotion for the event stated, 'Stations will include cotton candy and sexual orientation; what the Bible says about LGBTQIA+; pronoun button pins; the Catholic Church and the LGBTQIA+ Community; and Genderbread Person.'

With regard to its claim to provide information on 'what the Bible says about LGBTQIA+,' sacrilegious copies of the 'Queen James Bible' were made available to participants. 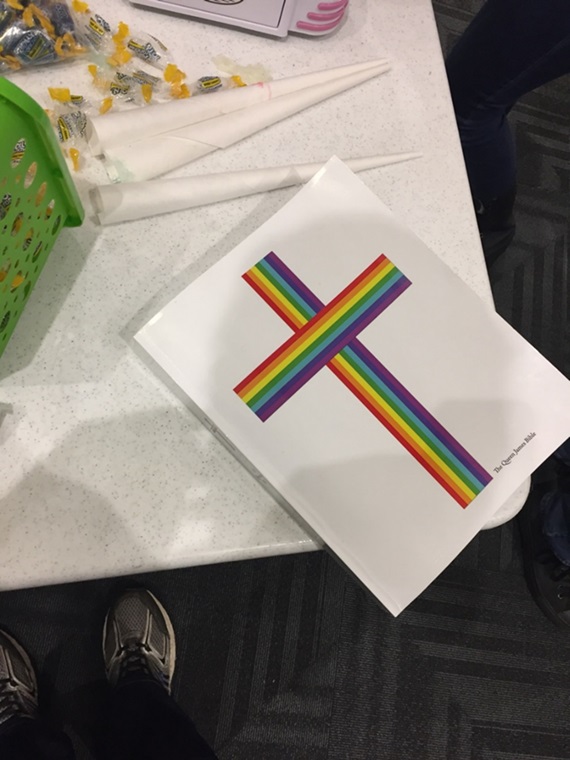 The write-up on the Queen James Bible at Amazon states that it was 'edited to prevent homophobic misinterpretation.' Claiming that homosexuality was never mentioned in the Bible until 1946, wherein eight verses are 'interpreted' to indicate that homosexuality is a sin, the publishers of the QJB say that they 'edited those eight verses in a way that makes homophobic interpretations impossible.'

Considering that this heretical interpretation of Scripture was fostered at an official Marian University event, it is difficult to see how this is in keeping with the Catholic identity Mr. Elsener claims was mischaracterized by this series of articles.

As indicated by the event announcement, the Ally Ship did indeed include the 'Genderbread Person.' 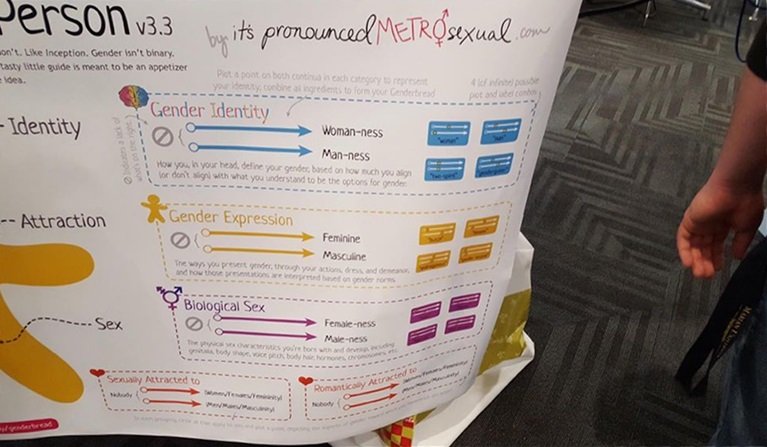 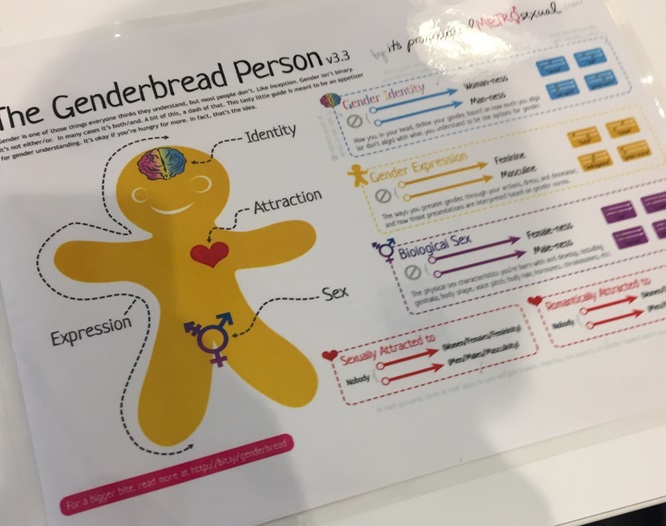 As mentioned earlier, the LGBT Alliance sponsored a presentation on 'Trans Healthcare,' which took place on Nov. 29, 2018.

During the presentation provided by the Eskenazi Transgender Clinic, a slide indicating 'trans health fails' included a statement from a man being denied an appointment at a gynecologist's office and a man complaining about being referenced to as a male by his dentist when he identifies as female. 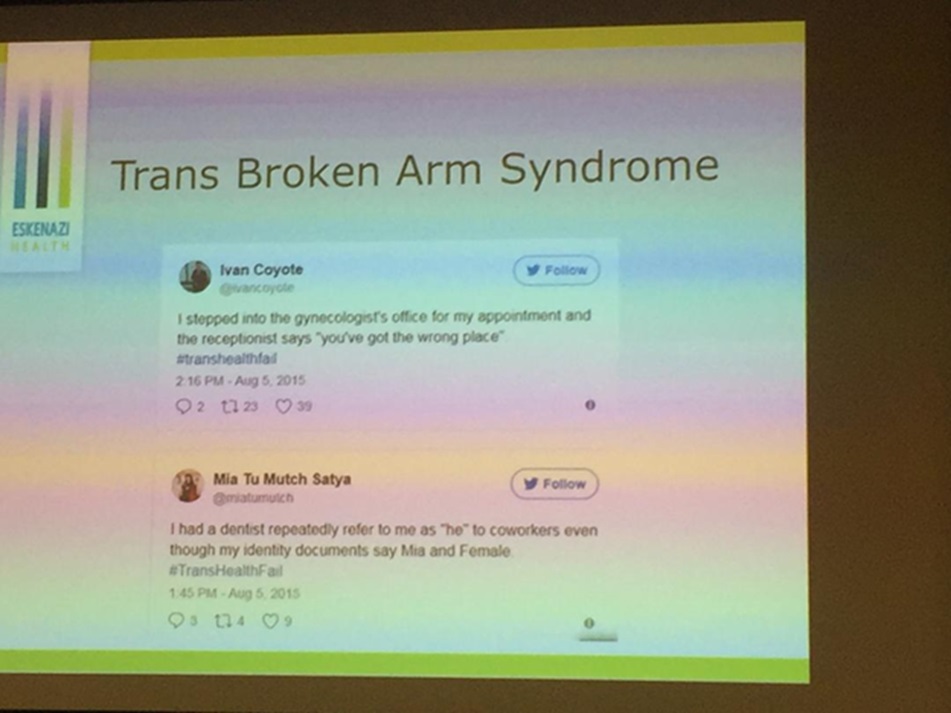 Another slide at this presentation included a Gender Unicorn, which is similar to the Genderbread Man. 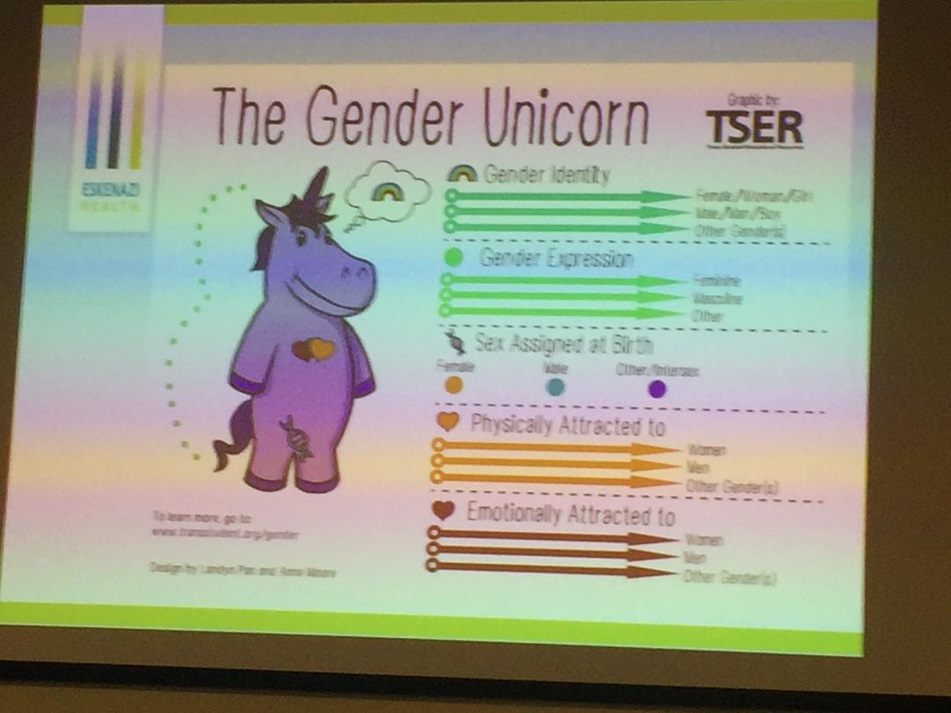 The handouts at this presentation included propaganda sheets instructing attendees on how to speak with and handle transgender individuals. The sheets suggest asking which pronoun (he or she) an individual prefers to be called by and issuing a quick and sincere apology for using the wrong pronoun. 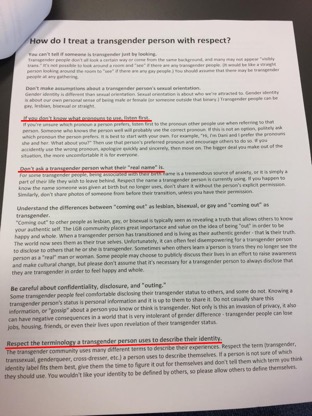 Given the body of evidence presented in these five articles, it is impossible to deny that there is a clear LGBT agenda at Marian University which is at complete odds with the Catholic identity to which MU President Daniel Elsener claims it adheres.