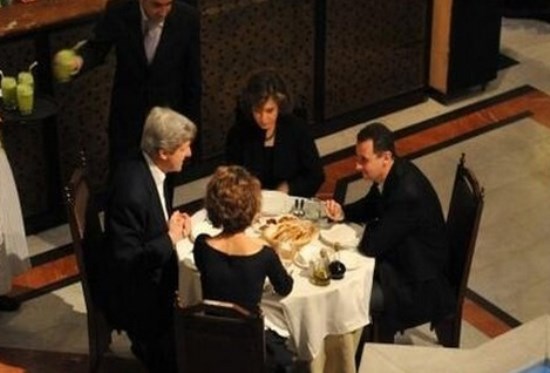 Power couples dine together in 2009 Secretary of State John Kerry is calling for the overthrow and murder of his friend, Syria's president Assad, claiming definitively that he used chemical weapons against his own people. John Kerry was a frequent visitor of Assad's over the last few years.  Perhaps no one in U.S. politics knows him better than Kerry who was complimentary of Assad as short as 2 years ago when he referred to him as a "very generous man". Power couples dine together in 2009 Kerry (America) has not provided the world with any proof other than grainy videos allegedly taken during the event and a declassified report which is probably as reliable as Bush's Iraq 45 minutes to nuclear launch reports. Assad has emphatically denied the accusations, and no independent source has yet confirmed America's claims. "Well, I personally believe that -- I mean, this is my belief, okay? But President Assad has been very generous with me in terms of the discussions we have had. And when I last went to -- the last several trips to Syria -- I asked President Assad to do certain things to build the relationship with the United States and sort of show the good faith that would help us to move the process forward," Kerry said in 2011. It's hard to believe the notion that Assad would be so foolish. The strategic idiocy in launching chemical attacks, not on the rebel fighters but on civilian loyalists near Damascus, knowing full well that it would invite Western intervention makes very little sense. We are supposed to believe that Assad, who speaks perfect English, is stupid and evil. Not likely. In fact, Assad was actually a strong ally in fighting Al Qaeda until America teamed up with Al Qaeda to destroy him and his country.