theorganicprepper.ca Do you have any 3rd graders in your life?   If they’re anything like the little 8 year old girls I know, they are probably playing with My Little Ponies and Polly Pockets, going to school, listening to One Direction, and painting their fingernails (out on the back porch so as not to get nail polish all over the house). Because that is the life of 8 year old girls in America. In many Islamic countries, however,  8 year old girls are donning fancy white dresses and going to get married to adult men.  The picture below is of a mass wedding in Gaza. (see author’s note below) 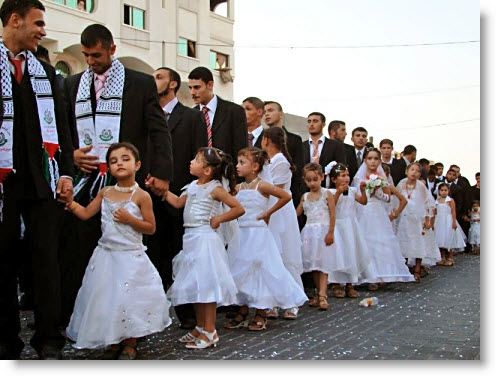 Recent news reports from Yemen tell of such a child who died on her wedding night. An 8 year old little girl named Rawan died from injuries sustained within her young, immature body when her 40 year old husband had intercourse with her.  The child bled to death in this perverted parody of a marriage after she was sold to her “husband” by her impoverished family. It would be horrific enough if this was a one-time tragedy, but this is a regular custom for young Muslim girls, especially in impoverished countries.  In 2010, a 13 year old girl (a 7th grader in America) died the same way – she hemorrhaged for 5 days  until she bled to death after wedding night sex with her husband.  Also in 2010, another 12 year old girl  died in labor after struggling to give birth for 3 days. Apparently girls are far easier to mold into “good Muslim wives” if you get them when they’re young.  More than a quarter of girls in Yemen are sold into marriage before the age of 15. The husband of little Rawan was not arrested.  The parents of Rawan were not arrested.  This was all perfectly legal, so Rawan’s agonizing, terrifying death is considered just an unfortunate accident in Yemen, with no more blame laid than if she had been the victim of a random lightning strike or any other unpreventable incident. This is part of Sharia law.  This is part of the “Religion of Peace.” Directly from the Quran:

According to the site Wiki Islam, this type of pedophilia is not only acceptable, but encouraged.  Due to religious reasons, laws cannot be made to discontinue the sickening practice.

Due to its many endorsements within Islamic scripture, child marriages are permitted by the majority of Muslim scholars and leaders, and in many Islamic countries it is common practice. Girls far below the age of puberty are forcibly married to older persons (sometimes in their 50s and later) for various personal gains by the girls’ guardian or with the intention to preserve family honor by helping her avoid pre-marital sex. Pedophilic Islamic marriages are most prevalent in Pakistan and Afghanistan, followed by other countries in the Middle East and Bangladesh.[5][6] This practice may also be prevalent to a lesser extent amongst other Muslim communities, and is on the rise among the growing Muslim populations in many non-Muslim countries, such as the United Kingdom[7] and the United States.[8] In countries like Yemen, Bangladesh, Iran, and Northern Nigeria, attempts at reforming laws and banning child marriages have been opposed and stopped on the grounds that such a ban would be un-Islamic,[9][10][11][12][13] and in the case of Malaysia, the growing Muslim population has effectively turned back the clock on social progress by passing new laws which allow for the practice of pedophilic marriages specifically between followers of Islam.[14]

Human rights activists are rightfully outraged by these senseless deaths, but flouting hundreds of years of customs and a religion that is practiced by nearly a quarter of the world’s population has proven to be a difficult battle.  Those who disagree with these practices are being painted as intolerant, racist, and anti-Muslim. How dare we step on the tenets of their faith? If you say this is wrong in an Islamic country, you’re liable to get your head promptly lopped off. to read more click here: theorganicprepper.ca