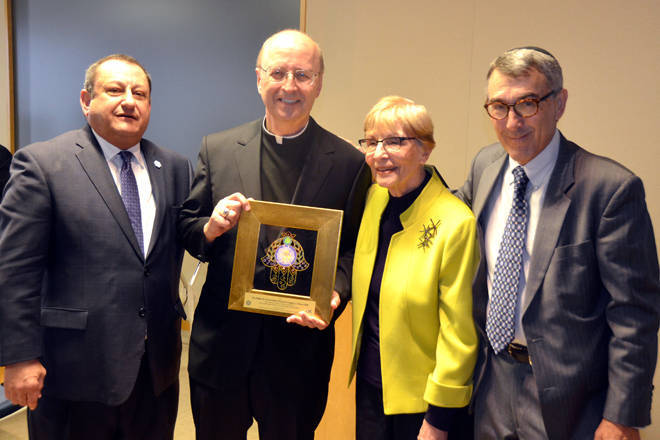 "KANSAS CITY — It was truly an interfaith gathering — leaders and members of the Kansas City area Catholic, Jewish and non-Catholic Christian communities — come together to honor a man they truly respected and indeed loved, Abbot Primate Gregory Polan, OSB, who served as Abbot of Conception Abbey for 20 years.

Abbot Polan, fondly known as Abbot Gregory, was elected Abbot Primate Sept. 10, 2016, the highest office in the 1,500-year old order. As the 10th Abbot Primate elected since the office was created by Pope Leo XIII in 1886, and successor to Abbot Emeritus Dr. Notker Wolf, OSB, Abbot Gregory serves as liaison to the Pope, and the connector between the various Benedictine monasteries throughout the world. He also serves as Abbot of Sant’ Anselmo Monastery in Rome, his residence when not traveling. He is the second abbot of Conception Abbey to be so elected by the Congress of Abbots; the first was Abbot Marcel Rooney, 1996 – 2000.

In July 2005, Abbot Gregory was appointed chair of the Kansas City-St. Joseph Diocesan Ecumenical and Interreligious Commission by then-Bishop Robert Finn. He began 'forging paths of unity, mutual understanding and friendship, sometimes successfully and sometimes with more to be learned and understood,' Abbot Gregory said...

Rabbi Cohen, who traveled from his Florida home to attend the luncheon, compared Abbot Gregory to Jethro, a priest of Midian who became Moses’ non-Hebrew father-in-law. Jethro (Yitro in the Torah) is the only portion of the Torah named for someone outside the Israelite or Jewish community, Rabbi Cohen said. Jethro is known for crossing boundaries between Israelite and non-Israelite communities, offering his daughter Zipporah to Moses as his wife, and giving Moses a description of a judicial system that could be managed with efficiency, proper resources and with justice and mercy. Rabbi Cohen spoke of the Jewish High Holy Days, 'when we pray to the God of Justice and Mercy, our Parent and our Ruler' explaining that justice and mercy are key components of Judaism, of society, and of Abbot Gregory, whom he hailed as a modern-day Jethro — an 'individual who reaches across boundaries, bringing us together, a modern priest of Midian' embodying Jethro’s qualities 'to draw people together, bring a sense of justice and mercy, compassion and fair dealing; all those things that provide us the ability to build bridges of community together.'

Abbot Gregory was introduced by attorney Michael J. Abrams, a partner with Lathrop and Gage, LLP, whose 22nd-floor meeting room was the luncheon’s venue. Abrams, who is past JCRB/AJC chair, gave a brief biography of Abbot Gregory, then recalled his synagogue being greatly impressed when the 'Benedictine monk from Northwest Missouri gave a beautiful sermon, partly in Hebrew, on the weekly portion of the Torah' read that particular day.

Abbot Gregory thanked Szneler and JCRB/AJC members, Lathrop and Gage and all in attendance for being there, and mentioned that on 'the 40th anniversary of the Promulgation of the document Nostra Aetate, which opened doors which had been too long closed to the development of friendship between Christians and Jews,' that he met Rabbi Cohen and his wife Linda, Marvin Szneler, Steve Israelite, Judy Hellman and her husband Lloyd. From them, he learned a 'wonderful spirit of cooperation and mutual efforts to do something good, together, for the Church and the Synagogue in Kansas City.' He read some quotes about friends, including, 'Friends are special, be sure in this earthly life to treasure them . . . Friends are the most important part of your life; treasure the tears, treasure the laughter, but mostly, treasure the memories,' and concluded with 'Those who are pure of heart and gracious of speech will have God (the king) as their friend.' (Proverbs 22:11)...

Szneler also said that Abbot Gregory’s 'commitment to interfaith relations was more than talking the talk. It was walking the walk and driving the drive' to meetings...

Szneler, on behalf of JCRB/AJC, presented Abbot Gregory with a plaque commemorating the event, the mutual friendship, and love and respect between the abbot and the Jewish community. The luncheon concluded with a chanting of Psalm 150 by Father Brendan Moss, OSB, president-rector of Conception Seminary College.

Abbot Primate Gregory was soon to return to Rome to continue his work."