This article deals with properly understanding and communicating an aspect of the Incarnation.  This is especially relevant because a few radical schismatics named Ryan and R.I., lacking the faith and a correct understanding of this matter, have falsely accused Pope Martin V and the Council of Constance of heresy (as will be explained below). 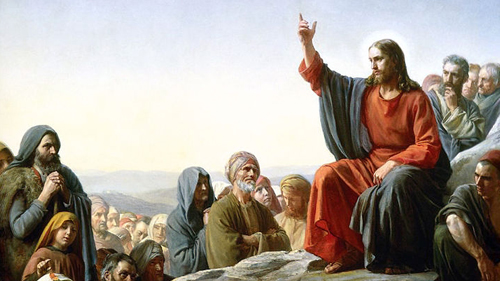 Council of Chalcedon, Definition of Faith, 451: “Therefore, following the holy fathers, we all teach that with one accord we confess one and the same Son, our Lord Jesus Christ, the same perfect in human nature, truly God and the same with a rational soul and a body truly man, consubstantial with the Father according to divinity, and consubstantial with us according to human nature… one and the same Christ only begotten Son, our Lord, acknowledged in two natures, without mingling, without change, indivisibly, undividedly, the distinction of the natures nowhere removed on account of the union but rather the peculiarity of each nature being kept, and uniting in one person... not divided or separated into two persons, but one and the same Son only begotten God Word, Lord Jesus Christ, just as from the beginning the prophets taught about Him and the Lord Jesus Himself taught us, and the creed of our fathers has handed down to us.”

The union could not have occurred in the natures themselves, for if the two natures mingled the human nature would have been absorbed into the divine and Christ would not have been truly man.

St. Thomas Aquinas, Summa Theologiae, Pt. 3, Q. 2, A. 1: “… it is impossible that the union of Incarnate Word took place in the nature… there can be no mingling of things widely apart; for the species of one of them is absorbed, e.g. if we were to put a drop of water in a container of wine.  Therefore, since the Divine Nature infinitely exceeds the human nature, there could be no mixture, but the Divine Nature alone would remain.”

St. Thomas Aquinas, Summa Theologiae, Pt. 3, Q. 2, A. 2: “Therefore, whatever adheres to a person is united to it in person, whether it belongs to its nature or not.  Hence, if the human nature is not united to God the Word in person, it is nowise united to Him; and thus belief in Incarnation is altogether done away with, and Christian faith wholly overturned.  Therefore, inasmuch as the Word has a human nature united to Him, which does not belong to His Divine Nature, it follows that the union took place in the Person of the Word, and not in the nature.”

St. Alphonsus also wrote against the heresy that the two natures in Christ mingled.

St. Alphonsus, History of Heresies, Refutation VII, Against Eutyches: “… this text proves that the two natures in Christ are unmingled and unconfused, each retaining its own properties, because, if the Divine Nature was changed in him, he would no longer be God when he became man… If the human was absorbed by the Divine Nature, or even changed into a Divine substance, as the Eutychians say… Christ could no longer be called man as he is in the Gospels, and all the New Testament… If the human nature, therefore, was thus mixed up with the Divine Nature, Christ would no longer be either true God or true man, but some third sort of Person, which is contrary to the whole teaching of the Scriptures.”

THE HUGE BLUNDER AND HERESY OF THE RADICAL SCHISMATICS

At the Council of Constance under Pope Martin V, the following error of John Hus was condemned.

The Errors of John Hus: “4. The two natures, the divinity and the humanity, are one Christ.” – Condemned by Pope Martin V at the Council of Constance

This was correctly condemned by the Church because even though Our Lord Jesus Christ has two natures, the one Christ is not simply a fusion of those natures (for the reasons explained above).  The union occurred in the one divine person of the Word, not in the natures.

Failing to understand the point we explained above (namely, that Jesus is one divine person with two natures and that the union of the Incarnation occurred in the person and not in the natures), certain radical schismatics rashly declared that the condemned error of John Hus cited above is “true”.  They also said that “both of these natures are the one Person” and that Martin V was a heretic and an “antipope” for condemning what they consider to be the true doctrine!  Wow.  In doing so they committed the mortal sin of schism, endorsed the heresy of Eutychianism, and exposed their failure to understand Christian theology about the Incarnation.  It’s another example of why people should not follow such radical schismatics and how the Devil uses them as a deception.