Interview of Benedict XVI during Flight to the United States, April 15, 2008: “And naturally, interreligious and ecumenical meetings are part of this Visit, especially an additional Meeting in the Synagogue with our Jewish friends on the eve of their Passover Feast. This is, therefore, the religious and pastoral aspect of the Church in the United States at this moment in our history, and the Meeting with all the others in this common brotherhood that binds us in a common responsibility… What I find fascinating in the United States is that they began with a positive concept of secularity, because this new people was composed of communities and individuals who had fled from the State Church and wanted to have a lay, a secular State that would give access and opportunities to all denominations, to all forms of religious practice. Thus, an intentionally secular new State was born; they were opposed to a State Church. But the State itself had to be secular precisely out of love for religion it its authenticity, which can only be lived freely. And thus, we find this situation of a State deliberately and decidedly secular but precisely through a religious will in order to give authenticity to religion.”[1]

First, Benedict XVI says that the religious and pastoral aspect of the Church in the U.S., at this moment in history, is to meet with false religious leaders and to have apostate interreligious gatherings! Second, Benedict XVI states that, no matter what religion you believe in, we are all bound together in common brotherhood - heresy. Third, he says that the Church should be separated from the state, and that only when the Church and the state are separated can religion have authenticity – heresy. 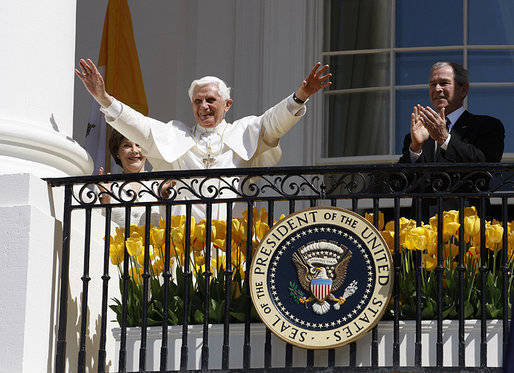 Benedict XVI, April 15, 2008, Discourse at the White House: “Historically, not only Catholics, but all believers have found here the freedom to worship God in accordance with the dictates of their conscience, while at the same time being accepted as part of a common-wealth in which each individual and group can make its voice heard.”[2]

He praises the heretical idea that people should worship God according to the dictates of their own conscience – heresy. 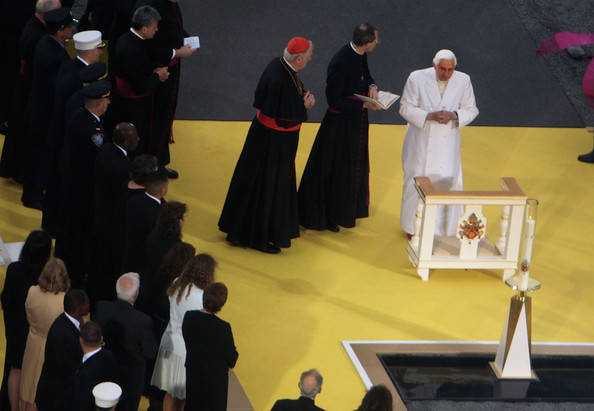 Benedict XVI, April 20, 2008, Prayer at Ground Zero in New York City: “O God of love, compassion and healing, look on us, people of many different faiths and traditions who gather today at this site, the scene of incredible violence and pain. We ask you in your goodness to give eternal light and peace.”[3]

He asks for God to give eternal light and peace to people who practice false religions. This is heresy. Noticing that he is invoking God, as if he is speaking in union with the other religions – as if he is presenting them all, and their false faiths, to the one true God! This is striking. It contrasts with, for instance, the prophets of the Old Testament. They would specifically distinguish their true sacrifice to the true God from the false ones of false religions to their false gods. It’s as if Benedict XVI is joining all of their offerings and religions together in abominable fashion!

Benedict XVI, April 20, 2008, Discourse at JFK International Airport in New York: “It was heart-warming to spend time with leaders and representatives of other Christian communities and other religions, and I renew my assurances or respect and esteem to all of you.”[4]

He says that he renews his respect and esteem for leaders of false religions. This is apostasy.