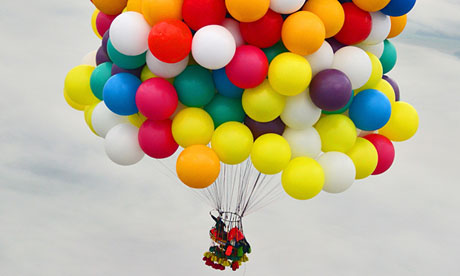 Jonathan Trappe soars in his bid to become the first man to cross the Atlantic in a balloon cluster system. Photograph: Paul Cyr / Barcroft USA An American aviator has begun the first attempt to cross the Atlantic suspended by hundreds of coloured balloons. Jonathan Trappe took off from Caribou, Maine, on Thursday morning as his capsule was lifted by 370 helium-filled balloons in heavy fog and he headed east from the US. The concept may sound like the story from the Disney film Up but Trappe, 39, specialises in cluster ballooning and was the first person to cross the Channel and the Alps using the method. The transatlantic trip could be as long as 2,500 miles (4,000km) and take between three and five days. Depending on the weather, he could land anywhere between Iceland and Morocco. Trappe is relying on state of the art weather data from the meteorologist who advised Felix Baumgartner on his record-breaking skydive from the stratosphere last year. The latest weather reports suggested winds would take Trappe to western Europe. "Weather is absolutely the most dangerous factor," said Trappe, speaking immediately before launch. " It's the only thing that will carry me across, but bad conditions could also ruin the attempt or endanger my life." Trappe, an IT project manager from Raleigh, North Carolina, said: "It was nail-biting waiting for a weather window that would allow me to get up into the air and catch those transatlantic winds we'd been seeing. I need to get on them and ride them across like a conveyor belt." Trappe will climb as high as 25,000ft (7.6km) to ride the winds that will propel him towards Europe. To ascend he will drop ballast and to descend he will pop or release balloons. Trappe already holds the record for the longest ever cluster balloon flight of 14 hours. "This is far greater than anything achieved before," he said. I'm looking at 62 hours or longer." On previous flights Trappe travelled on an office chair suspended by the balloons. On this trip, he is travelling inside a small yellow lifeboat. "If I touch down on water then the attempt will be over as it will be impossible to take off again, but the boat will keep me alive," he said. "It will be incredibly dangerous as I could be several days away from any rescue crew and it will mean surviving rough seas for a long time, alone."