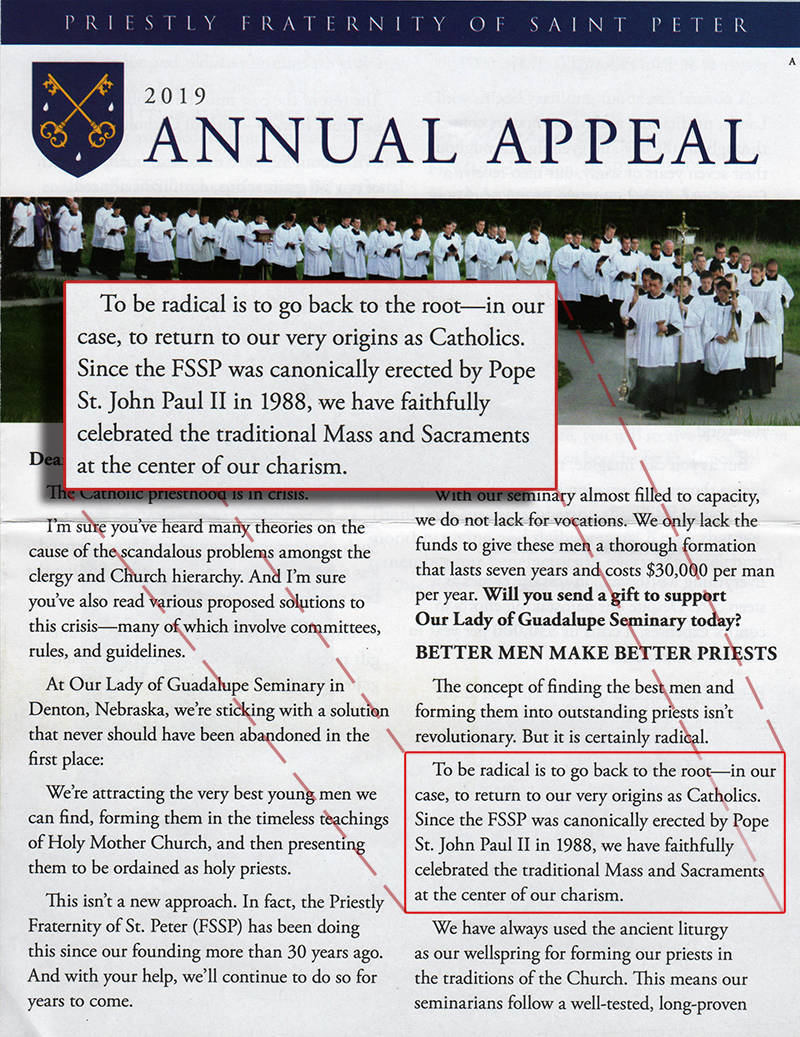 In their 2019 appeal letter, the Fraternity of St. Peter (FSSP) calls John Paul II "St. John Paul II."  John Paul II promoted idolatry, religious indifferentism, and many other heresies.  He was an apostate, an antipope and more.  Besides his false ecumenism and religious indifferentism, John Paul II agreed with the Lutherans on justification, taught that non-Catholics may receive Communion, taught heresy on religious liberty, taught that Protestants and schismatics can be martyrs and in the Body of Christ, taught universal salvation, and more.  John Paul II engaged in notoriously sinful acts through which he paid homage to false religions (e.g. kissing the Koran).  Through his interfaith activity John Paul II also functioned as a missionary for false gods.  He repeatedly praised false religions and by extension the false gods worshiped in those religions.  John Paul II also built temples to false gods.  Consider, for example, the mini-temples or shrines for the various gods at Assisi.  They were approved and made possible by John Paul II.  He provided the followers of those religions with a place to worship those gods.  He brought the worship of those gods to the entire world at Assisi - giving them a prominence they never had before. 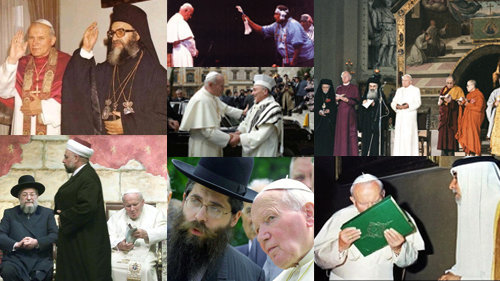 To consider someone who endorsed and served false gods, built shrines to false gods, praised false religions, and brought the worship of false gods before the world to be 'holy' or a 'saint' is to consider false gods to be holy.  That's explained in our video called The Antichrist Revealed: The Beast That Was And Is Not Has Returned.  That's why John Paul II's 'canonization' holds such apocalyptic significance.

As our videos cover, during the reign of the pagan Roman Empire (The Beast That Was), many Catholics were implicated in mortal sin and apostasy through the worship of the image of the deceased pagan Roman king.  The Apocalypse also prophesies that in the final days the Beast will return in a new form.  That has happened.  The veneration of the image of the deceased pagan Roman king John Paul II, which implicates many in apostasy and mortal sin, is a prime example of the fulfillment of prophecy about the Beast returning to Rome in the end-times.  This prophecy is also fulfilled by the false canonizations of the pagan Roman kings Antipope Paul VI and Antipope John XXIII, although Antipope John Paul II (the one who was also wounded) was the most notoriously connected to idolatry and the worship of false gods.

The veneration of these pagan Roman kings who endorsed wickedness, false religions and false gods is the means by which 'conservative' groups such as the FSSP have been implicated in idolatry.  By considering John Paul II to be a saint, with even a basic knowledge of his deeds, the Fraternity of St. Peter and others are guilty of mortal sin against the 1st Commandment.

The FSSP's recognition of John Paul II as a saint proves that they are phonies who don't care about Jesus Christ and His truth.  They are a group that exists on externals.  They don't have the faith, and they don't stand against evil.  Their despicable recognition of Antipope John Paul II as a 'saint' demonstrates, once again, that traditional externals or vocation numbers mean nothing if the true faith is not preserved without compromise.

In our video called Blind To Benedict XVI: Fraternity of St. Peter, we document that one of their 'priests' named 'Fr.' Joseph Terra said that Antipope Benedict XVI was “without doubt a great pope”, that he is “holy”, that his “shepherding was wonderful”, and that he could even be canonized!  This is astounding when one considers the voluminous evidence of Antipope Benedict XVI's heretical statements and wicked deeds (see below).  The FSSP is not Catholic, and their members don't stand for the truth.  They are in darkness and in the Whore of Babylon.  Those who support or promote the heretical FSSP in the face of these facts commit mortal sin.  The same applies to many other heretical priestly groups, both sedevacantist and non-sedevacantist.