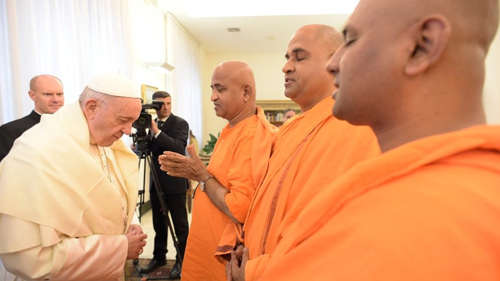 Francis’ May 16, 2018 remarks during meeting with a delegation of Buddhists, Hindus, Jains and Sikhs:

“Dear Friends… I am most appreciative of the efforts of those who made possible this initiative, which brought together Christians, Hindus, Buddhists, Jains and Sikhs… It is a cause for thanksgiving to God when religious leaders actively foster a culture of encounter… I thank you for what you have done by coming together, in accordance with your respective religious traditions, to promote goodness in our world, and upon you and your communities I invoke an abundance of divine blessings.”[1] 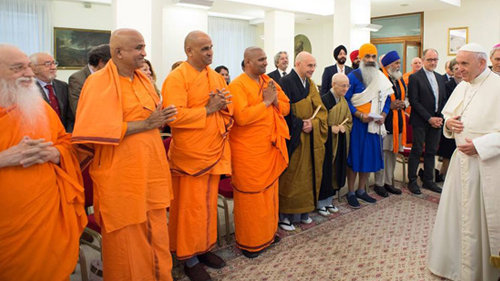 “I offer you a warm welcome and I thank you for the precious gift of your Sacred Book translated into today’s language by the monks of Wat Pho Temple. It is a tangible sign of your generosity and of the friendship that we have shared for so many years, a journey made of many small steps. I think in particular of the meeting in the Vatican between Blessed Pope Paul VI and the Venerable Somdej Phra Wanaratana, whose portrait can be seen in the entrance of the Pontifical Council for Interreligious Dialogue, which you have visited in these days. It is my heartfelt wish that Buddhists and Catholics will grow increasingly closer, advance in knowledge of one another and in esteem for their respective spiritual traditions, and offer the world a witness to the values of justice, peace, and the defense of human dignity. With renewed gratitude for this meeting, I invoke upon on all of you the divine blessings of joy and peace.”[2]

Francis receives the “Sacred Book” of the Buddhist “monks”, saying that it is a “precious gift”. Francis then calls a “famous” deceased Buddhist “Venerable”. The Buddhist (Somdej Phra Wanaratana) was the most widely known Buddhist “monk” in Thailand. It is said he “possessed magical powers”.[3] Francis calls for Buddhists and Catholics “to grow increasingly closer, advance in knowledge of one another and in esteem” for the false religion of Buddhism. Antipope Francis says Buddhists “offer the world a witness”, and he invokes “divine blessings of joy and peace” on people headed straight for everlasting damnation.