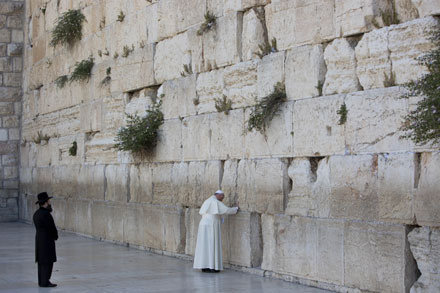 Pope Francis left a note at the Wall in accordance with Jewish tradition.

Below, he embraces his two friends (Photo: PA)

On his last day in the Holy Land, Pope Francis prayed at the Western Wall, the holiest site in Judaism, before an emotional hug with two old friends – a Muslim leader and a rabbi.

Francis stood at the Wall for more than a minute and a half, most of the time in silent prayer, before reciting the Our Father. Then he followed custom by leaving a written message inside a crack between two blocks.

He was accompanied by his two friends Rabbi Abraham Skorka and Omar Abboud. 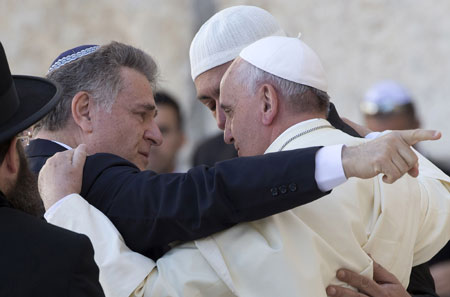 Rabbi Skorka said the Pope’s message contained the text of the Our Father and of the 122nd Psalm, traditionally prayed by Jewish pilgrims who travel to Jerusalem.

He said he told the Pope and Mr Abboud when they embraced: “We did it.”

Earlier in the morning Pope Francis toured the Dome of the Rock on the Temple Mount, sacred to Muslims as the place from which Mohammed ascended to heaven, and spoke to Muslim leaders.

Addressing his listeners as “brothers” – rather than “friends”, as indicated in his prepared text...