Antipope Francis has directed that key documents relevant to his notoriously heretical teaching in Amoris Laetitia (that people living in open, public, unrepentant adultery may receive Holy Communion) be given even more official status by their publication in the ‘official acts of the Apostolic See’ for the Vatican II Sect. Francis has also elevated these documents to the status of ‘Apostolic Letter’ (Epistula Apostolica) and specifically directed that they be considered part of his ‘authentic Magisterium’! This is another smashing proof that Francis is a notorious heretic and an antipope, and that the Vatican II Sect is not the Catholic Church. As you might expect, this development is causing further dismay and wonder among those who still hope in vain in the Vatican II Sect (the prophesied Whore of Babylon) and its apostate non-Catholic antipopes. 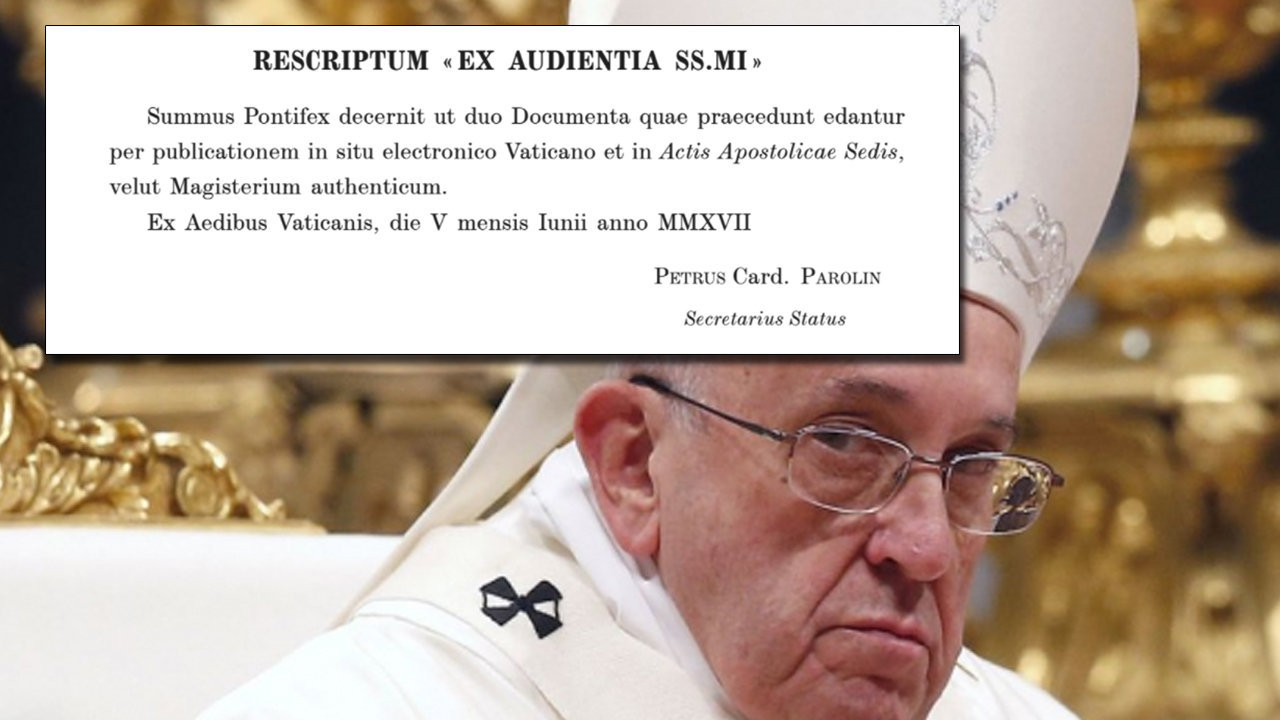 To understand what Antipope Francis did, why it’s so significant, and why false traditionalists are so distressed about this, let’s quickly recap the most important facts here:

“In other, more complex circumstances, and when it is not possible to obtain a declaration of nullity, the aforementioned option [i.e. “continence”] may not, in fact, be feasible. Nonetheless, it is equally possible to undertake a journey of discernment. If one arrives at the recognition that, in a particular case, there are limitations that diminish responsibility and culpability (cf. 301-302), particularly when a person judges that he would fall into a subsequent fault by damaging the children of the new union, Amoris Laetitia opens up the possibility of access to the sacraments of Reconciliation and the Eucharist (cf. notes 336 and 351). These in turn dispose the person to continue maturing and growing with the aid of grace.” (Argentinian ‘Bishops’, Basic criteria for the application of chapter 8 of Amoris Laetitia, #6., Sept. 5, 2016)

According to the Argentinian ‘Bishops’, Amoris Laetitia allows people living in open, public, unrepentant adultery “the possibility of access to the sacraments of Reconciliation and the Eucharist”. This is of course blatantly heretical, and it is a totally accurate interpretation of Antipope Francis’ horribly heretical document, Amoris Laetitia.

Francis’ letter to Mons. Sergío Alfredo Fenoy, Delegate of the Buenos Aires Pastoral Region, regarding the Argentinian Bishops’ Basic Criteria for the Application of Chap. 8 of Amoris Laetitia:

“Beloved brother: I received the document from the Buenos Aires Pastoral Region, ‘Basic Criteria for the Application of Chapter Eight of Amoris Laetitia.’ Thank you very much for sending it to me. I thank you for the work they have done on this: a true example of accompaniment for the priests... and we all know how necessary is this closeness of the bishop with his clergy and the clergy with the bishop. The neighbor ‘closest’ to the bishop is the priest, and the commandment to love one’s neighbor as one’s self begins for us, the bishops, precisely with our priests. The document is very good and completely explains the meaning of chapter VIII of Amoris Laetitia. There are no other interpretations. And I am certain that it will do much good. May the Lord reward this effort of pastoral charity.” (Francis' Letter To Delegate of Argentinian 'Bishops' on Chap. 8 of Amoris Laetitia, Sept. 5, 2016)

BUT FRANCIS TAKES IT FURTHER

While it’s true that the presence of a document in the ‘Acts of the Apostolic See’ during the reign of a valid pope does not mean, in itself, that it is infallible, this series of actions by Francis with regard to Amoris Laetitia leaves no doubt that he has attempted to invoke his official magisterial teaching authority to promulgate heresy. That’s because we are dealing with an underlying document (Amoris Laetitia) promulgated in specific form by the so-called ‘pope’ to the entire Church, and it contains blatant heresy. That specific form document to the entire Church has, in turn, been followed up by other officially published documents that are now identified collectively as an 'Apostolic Letter' (i.e. Antipope Francis' letter to the Argentinian ‘Bishops’ and their guidelines), which reaffirm the blatant heresy.  In fact, on June 5, 2017, the Secretary of State, Pietro Card. Parolin, published a ‘Rescript’ (an official response from the ‘Pope’) which declared that Francis “decrees” that both of the previously cited documents (i.e. 1- The Argentinian Bishops' Basic Criteria; and 2- Francis' letter agreeing with them) be considered part of the “authentic Magisterium”:

Rescript from an Audience with "Pope Francis"

The Supreme Pontiff decrees that the two documents which precede should be promulgated through publication on the Vatican’s electronic site and in the Acts of the Apostolic See, as authentic Magisterium.

Antipope Francis has officially promulgated the heresy that adulterers may receive ‘Communion’ to the entire ‘Church’ and decreed that it be considered the teaching of the ‘authentic Magisterium’. In the face of such facts, to profess communion with Antipope Francis is to profess union with a false Church that allows adulterers to receive ‘Holy Communion’. In that regard, it is equivalent to professing communion with the Anglican Sect. A person with even a small amount of insight should recognize that the specificity of this imposition of heresy is not happening by accident. It is apocalyptic.

Francis and the end-times beast are attempting to impose heresy on all who recognize him. They are making it extremely clear and official that their sect endorses evil and teaches heresy on the matter of adultery. The Devil’s goal (through them) is to leave those who cling to the Counter Church with no excuse on Judgment Day.

Those who will be without excuse in the face of such facts include thousands of false traditionalists. Their bad will continues to astound and appall. No matter how much proof comes out to demonstrate that sedevacantists are and have been correct (such as the facts discussed above), many of them still fail to adopt the correct position as a result of faithlessness and impurity of intention.

Francis on Amoris Laetitia: “There are no other interpretations” than Communion for Adulterers

Padre Pio: “Satan Will Come To Rule A False Church”