In Cuba on Feb. 12, 2016, Antipope Francis had a ‘historic’ meeting with Kirill, the schismatic patriarch of the Russian ‘Orthodox’ Church.  During the meeting, the two signed a Joint Declaration.  One can find the full text of their declaration here.  The Joint Declaration contains numerous major heresies.

FRANCIS REJECTS “UNIATISM” (I.E. THE NEED TO ACCEPT THE PAPACY AND BECOME CATHOLIC) 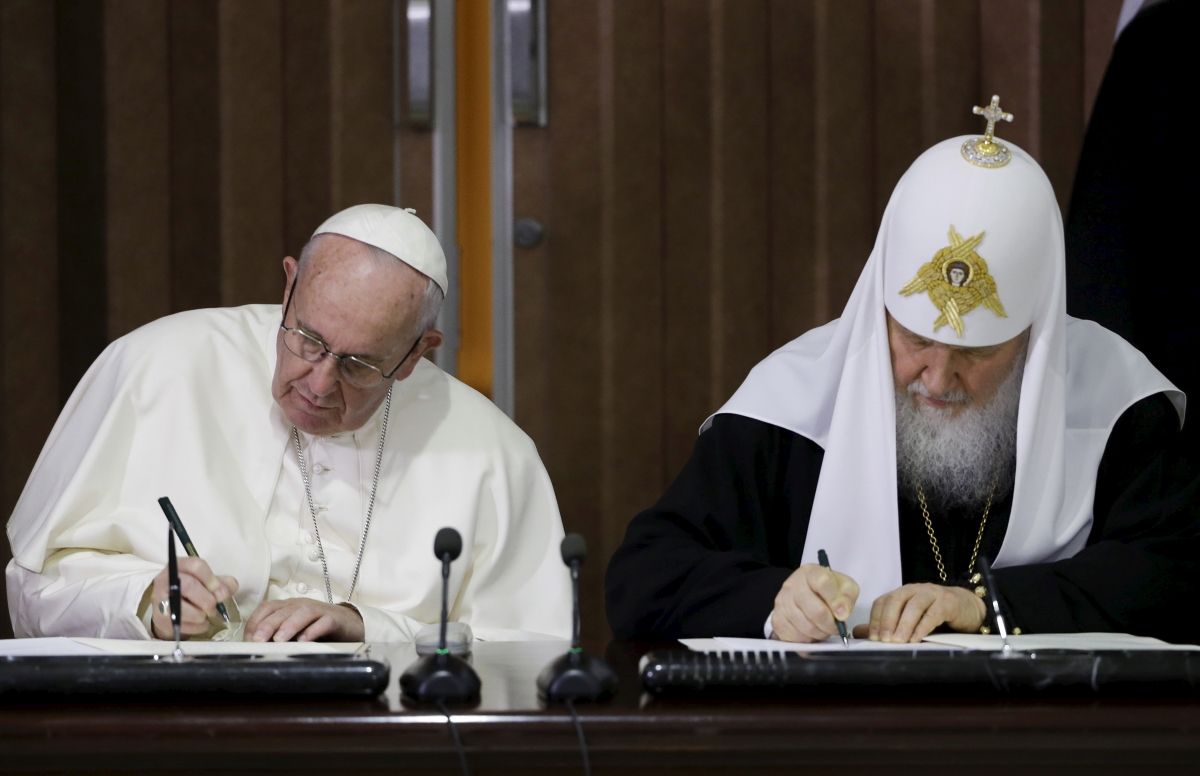 In #25 of the Joint Declaration, Francis and Kirill jointly reject uniatism.   This statement comes immediately after the two reject “any form of proselytism” in #24.

Francis and Kirill, Joint Declaration #25: “It is our hope that our meeting may also contribute to reconciliation wherever tensions exist between Greek Catholics and Orthodox.  It is today clear that the past method of ‘uniatism’, understood as the union of one community to the other, separating it from its Church, is not the way to re–establish unity.  Nonetheless, the ecclesial communities which emerged in these historical circumstances have the right to exist and to undertake all that is necessary to meet the spiritual needs of their faithful, while seeking to live in peace with their neighbours. Orthodox and Greek Catholics are in need of reconciliation and of mutually acceptable forms of co–existence.”

Uniatism refers to “the union of an Eastern Rite church with the Roman Church in which the authority of the Papacy is accepted”.  Likewise, uniates are members of Eastern Rite communities which accept the Holy See and the Catholic faith.  Francis rejects uniatism.  He declares that it is NOT the way for unity.  Thus, Francis is publicly rejecting the need to accept the Papacy and become Catholic.  This is notorious heresy.  As our material shows, Francis teaches this massive heresy all the time.  It’s part of his profession of ‘faith’.  The Catholic Church dogmatically teaches and professes EXACTLY THE OPPOSITE.

One could also cite Vatican I to contradict Francis’ heresy.  Since only those who profess the true faith can be considered members of the Catholic Church, do you see how absurd and anti-Catholic it is to maintain that Francis is the pope (and therefore a member of the Church) in light of his profession?

Pope Pius XII, Mystici Corporis Christi (#22), June 29, 1943: “Actually only those are to be included as members of the Church who have been baptized and profess the true faith.”

Pope Pius XII, Mystici Corporis Christi (# 23), June 29, 1943: “For not every offense, although it may be a grave evil, is such as by its very own nature to sever a man from the Body of the Church, as does schism or heresy or apostasy.”

Obviously, Francis does not profess the true faith.  He therefore cannot be considered a member of the Catholic Church or the pope.

In #12 of the Joint Declaration, Francis and Kirill declare that “martyrs” come from non-Catholic churches.  As we’ve documented, Francis teaches this heresy all the time.  It is part of his profession of ‘faith’.

Francis and Kirill, Joint Declaration #12: “We bow before the martyrdom of those who, at the cost of their own lives, have given witness to the truth of the Gospel, preferring death to the denial of Christ.  We believe that these martyrs of our times, who belong to various Churches but who are united by their shared suffering, are a pledge of the unity of Christians.”

Francis’ statement is another public rejection of defined Catholic dogma.  It denies the dogma Outside the Church There is No Salvation, the teaching of the Council of Florence, and other things.

Pope Eugene IV, Council of Florence, “Cantate Domino,” 1441, ex cathedra:  “The Holy Roman Church firmly believes, professes, and proclaims that none of those existing outside the Catholic Church, not only pagans, but also Jews, heretics and schismatics can become participants in eternal life, but they will depart ‘into everlasting fire which was prepared for the devil and his angels’ [Matt. 25:41], unless before the end of life they have been added to the flock; and that the unity of this ecclesiastical body is so strong that only for those who abide in it are the sacraments of the Church of benefit for salvation, and do fasts, almsgiving, and other functions of piety and exercises of a Christian soldier produce eternal rewards.  No one, whatever almsgiving he has practiced, even if he has shed blood for the name of Christ, can be saved, unless he has persevered within the bosom and unity of the Catholic Church.”

Pope Pelagius II, epistle (2) Dilectionis vestrae, 585: “Those who were not willing to be at agreement in the Church of God, cannot remain with God; although given over to flames and fires, they burn, or thrown to wild beasts, they lay down their lives, there will not be for them that crown of faith, but the punishment of faithlessness, not a glorious result (of religious virtue), but the ruin of despair. Such a one can be slain; he cannot be crowned.”

Once again, we see that Francis does not profess the true faith but a false faith.

FRANCIS DENIES THAT THE PAPACY WAS HELD IN THE FIRST MILLENNIUM

In paragraph #s 4 and 24 of the Joint Declaration, Francis and Kirill declare that they “share the same spiritual Tradition of the first millennium of Christianity”.

Francis and Kirill, Joint Declaration #4: “We share the same spiritual Tradition of the first millennium of Christianity.  The witnesses of this Tradition are the Most Holy Mother of God, the Virgin Mary, and the saints we venerate.  Among them are innumerable martyrs who have given witness to their faithfulness to Christ and have become the 'seed of Christians'.”

Francis and Kirill, Joint Declaration #24: “Orthodox and Catholics are united not only by the shared Tradition of the Church of the first millennium, but also by the mission to preach the Gospel of Christ in the world today. This mission entails mutual respect for members of the Christian communities and excludes any form of proselytism.  We are not competitors but brothers…”

Kirill, as an ‘Orthodox’ schismatic, rejects the Papacy, among other Catholic teachings.  His ‘Tradition’ is that the Bishop of Rome does not possess a primacy of universal jurisdiction.  By declaring that he and Kirill “share the same spiritual Tradition of the first millennium”, Francis is professing that the true Tradition of the first millennium is that the Roman Pontiff did not have a primacy of jurisdiction.  That’s a denial of Vatican I’s teaching on the Papacy.  Benedict XVI taught the same heresy, by the way (https://vaticancatholic.com/principles-of-catholic-theology/).  Here’s the text of Vatican I which Francis denies:

Pope Pius IX, Vatican Council I, Sess. 4, Chap. 2: “Surely no one has doubt, rather all ages have known that the holy and most blessed Peter, chief and head of the apostles and pillar of faith and foundation of the Catholic Church, received the keys of the kingdom from our Lord Jesus Christ, the Savior and Redeemer of the human race; and he up to this time and always lives and presides and exercises judgment in his successors, the bishops of the holy See of Rome, which was founded by him and consecrated by his blood.  Therefore, whoever succeeds Peter in this chair, he according to the institution of Christ himself, holds the primacy of Peter over the whole Church.” (Denz. 1824)