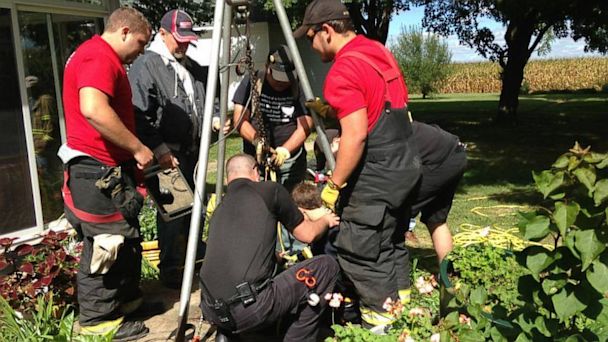 A dog that plunged down an Illinois well had to swim in a tiny circle for about 90 minutes before rescuers were able to bring it back to the surface. Doogie, an 8-year-old goldendoodle, tumbled into the well in Granville, Ill., when the cover  was left open so a repairman could inspect it on Saturday. Judy Hopkins opened the door to let her dog out and as he ran out to greet the repairman about 10:30 a.m., the pooch spilled into the well, Standard Fire Chief Mike Skowera told ABCNews.com. “He’s a very gentle, playful dog and has free reign of the yard,” Arch Hopkins told ABC News. Hopkins said his dog, who weighs 70 pounds when dry, toppled into the well before he had a chance to catch him. Hopkins said he and the repairman shined a flashlight down the well and could see the dog floating in the water. “We at least had hope that he was okay,” he said. The dog fell 23 feet, splashing into 14 feet of cold water. He had to keep paddling around the 4-foot wide well until his rescue at noon, Skowera said. to read more click here: abcnews.go.com