“I believed in the beginning it would be easy to stop the filthy material from being taught in schools.  I was confident that if any decent person would just look at the material, they would be repulsed and stop it immediately.  I was naive to think the Archbishop or his "department heads" cared anything for souls.”[1]

Since the Vatican II revolution, the once-Catholic school system has been laid waste.  Even many supporters of the Vatican II/Novus Ordo “Church,” who have made themselves vigorous defenders of the antipopes we’ve exposed in the preceding sections, have been forced to abandon the Novus Ordo “Catholic” school system in droves.  The heresy and immorality of the “Catholic” school system allows one to say that it’s no longer Catholic except in name only.   Chief among its many problems is sex education.

Pope Pius XI condemned sex education.  In doing so, he pointed out that it’s not ignorance of such things which lead to sins in this regard, but rather exposure to such enticements.

Pope Pius XI, Divini illius magistri, Dec. 31, 1931: “But much more pernicious are those opinions and teachings regarding the following of nature absolutely as a guide.  These enter upon a certain phase of human education which is full of difficulties, namely, that which has to do with moral integrity and chastity.  For here and there a great many foolishly and dangerously hold and advance the method of education, which is disgustingly called ‘sexual,’ since they foolishly feel that they can, by merely natural means, after discarding every religious and pious aid, warn youth against sensuality and excess, by initiating and instructing all of them, without distinction of sex, even publicly, in hazardous doctrines; and what is worse, by exposing them prematurely to the occasions, in order that their minds having become accustomed, as they say, may grow hardened to the dangers of puberty.

“But in this such persons gravely err, because they do not take into account the inborn weakness of human nature, and that law planted within our members, which, to use the words of the Apostle Paul, ‘fights against the law of my mind’ (Rom. 7:23); and besides, they rashly deny what we have learned from daily experience, that young people certainly more than others fall into disgraceful acts, not so much because of an imperfect knowledge of the intellect as because of a will exposed to enticements and unsupported by divine assistance.”[2]

In blatant disregard of this teaching, sex education programs, including graphic ones, are implemented in all “Catholic schools,” thus corrupting the innocence of Catholic children from their earliest years.  In fact, it would be a gross understatement to merely call these programs “sex education.”  They are more correctly labeled “sex initiation” or indoctrination in filth.  As partially quoted at the beginning of this section, one mother, whose child was receiving this “sex education” in the “Catholic” school, expressed her outrage to the “bishop”, but to no avail:

“The last two months have been a nightmare.  I believed in the beginning it would be easy to stop the filthy material from being taught in schools.  I was confident that if any decent person would just look at the material, they would be repulsed and stop it immediately.  I was naive to think the Archbishop or his "department heads" cared anything for souls.  Instead, what I found was a Chancery full of people with deadened consciences and deformed judgments----- "white washed sepulchers with dead men’s bones."  Every parent in this diocese should be alarmed that such people have been put in charge of caring for and teaching innocent and vulnerable children.  It is scandalous!”[3]

To illustrate the perversion of this “sex education,” it’s necessary to expose some specifics.  If specifics are never given, most never realize how bad the situation really is.  In the Diocese of San Antonio, for instance, the book Growing in Love is used for sex education grades K-8.  This book is also used in dioceses all over the country.  A complaining mother noted about this book:

“Growing in Love, is so utterly disgusting and depraved in its explicit description of perverted sex acts including oral sex techniques for male and female heterosexuals and homosexuals, and so in-your-face with ‘gay and lesbian agit-prop,’ that it just might spark enough public outrage to force the American hierarchy and the Vatican to bring this fifty-year anti-life, anti-child, anti-family and anti-God experiment to a merciful end.”[5]

Matthew 18:6- “But he that shall scandalize one of these little ones that believe in me, it were better for him that a millstone should be hanged about his neck, and that he should be drowned in the depth of the sea.”

And while this abominable and satanic sex initiation is taught in “Catholic” schools, it’s actually illegal to present such sexually graphic material, as is found in Growing in Love, in public schools in the state of Louisiana.[6]  The book Growing in Love bears the Nihil obstat of Rev. Richard L. Schaefer, Censor DePutatus and the imprimatur of Archbishop Jerome Hanus of the Archdiocese of Dubuque (IA).

In light of the above situation, it’s not surprising that basic Catholic dogma and morality are rejected or almost universally ignored by “Catholics” who have come from these schools.  Immorality, immodesty and indifferentism are rampant, and in many ways the Novus Ordo “Catholics” are as bad as or worse than the pagans.  For instance, almost all “Catholic” high schools host proms and balls which feature Rap, Rock, and Heavy Metal music – as well as lascivious dress and dancing.  There’s no aversion to the modern culture and the worldly celebrations, which Scripture and traditional Catholic Faith teach are at variance with the ways of God.  Rather, there is a union of pagan culture and the Novus Ordo school system.   Since this is the opposite of what a real Catholic education imparts, this shows again that the Novus Ordo school system is devoid of the true Catholic Faith.

Pope Leo XIII, Exeunte iam anno (# 10), Dec. 25, 1888: “Now the whole essence of a Christian life is to reject the corruption of the world and to oppose constantly any indulgence in it…”[7]

People go through four years of “Catholic” high school without having been taught the concept of mortal sin.[8]  As the aforementioned mother noted, “It is a real tragedy that in today’s Catholic schools, children today can recite the litany of sexual body parts, but cannot recite the Lord’s Ten Commandments.”[9]  A study written by a professor of sociology at Notre Dame concluded that American “Catholic” teens are “largely indifferent to faith and practice matters.”[10]  That revealing assessment is also probably an understatement if we consider that it comes from a professor who teaches at one of the post-Vatican II sect’s universities.

Both in America and abroad, the post-Vatican II “Catholic” school system is fraught with religious indifferentism and a celebration of false religions.  For instance, Holy Rood Roman Catholic Primary School in South Yorkshire, England – approved by the Diocese of Hallam – held a Sikh and a Jewish Day in order to celebrate these false religions.[11] 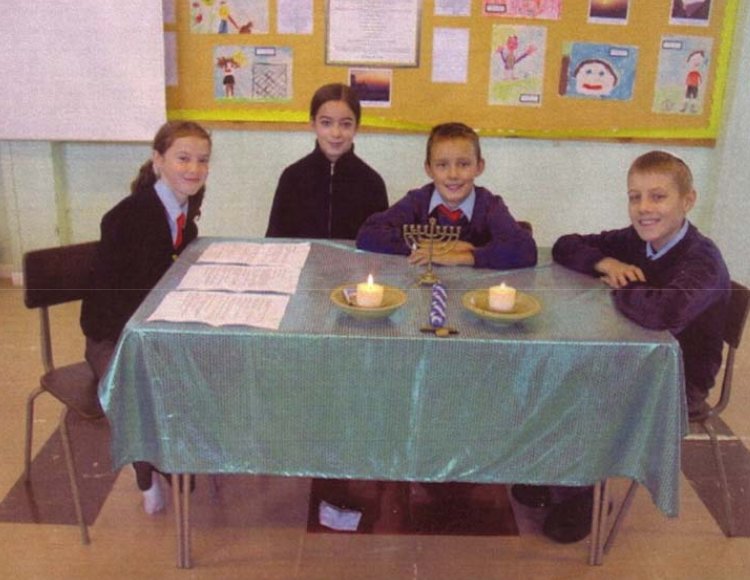 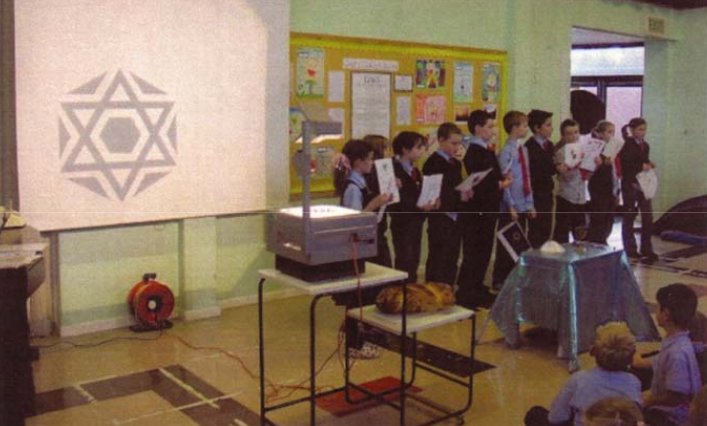 This is so evil and so sad; they’re turning these little children into apostates.

The post-Vatican II “Catholic” school system is a complete joke, and perhaps the only reason it still has even a semblance of respect or recognition as “Catholic” from the modern world is because of its athletic programs.  The “Catholic Leagues” are now identified with competitive high school athletics, which boast some of the top sports programs in the country, especially in football and basketball.  The “Catholic Leagues” are certainly not outstanding for their formation of people in the Catholic Faith, which is non-existent.

Since the Catholic Faith is no longer held to be necessary for salvation, Novus Ordo priests no longer tell families they are obliged to send their children to “Catholic” schools.  “The number of Catholic schoolchildren in the Archdiocese of Boston has plunged from 152,869 in 1965 to 50,742 today, and the archdiocese has closed multiple schools during each of the last several years.”[12]

The statistics of decline for the U.S. as a whole are even more striking.

“-- Catholic schools.  Almost half of all Catholic high schools in the United States have closed since 1965.  The student population has fallen from 700,000 to 386,000.  Parochial schools suffered an even greater decline.  Some 4,000 have disappeared, and the number of pupils attending has fallen below 2 million -- from 4.5 million.  Though the number of U.S. Catholics has risen by 20 million since 1965, Jones' statistics show that the power of Catholic belief and devotion to the Faith are not nearly what they were.” [13]

In considering these figures, one must remember that the population of professing Catholics increased by 20 million since 1965. [14]  Thus, if the number of Catholic schoolchildren had remained the same since 1965, that would represent, in itself, a tremendous failure.  But when we consider that not only has the number not remained the same, but almost half of all Catholic high schools have closed, and parochial school attendance has decreased by 2.5 million, this represents a catastrophic crisis and a deep-seated spiritual rot.  It’s all tied up with what we’ve been covering and exposing in the first part of this book: the Vatican II antipopes, the New Mass and the Vatican II apostasy.

[1] Quoted in a discussion on the topic: http://www.dotm.org/sexed-notes.htm

[8] Personal testimony given to MHFM.