Residents of an elite Washington, D.C. neighborhood took to an internet message board in a state of panic after spotting a white man parking his work truck on the side of a public street, eventually calling police over fears that the truck was an “insurrectionist” vehicle.

According to a recent report from The Washington Post, residents of the elite Adams Morgan neighborhood in Washington, D.C. took to the Next Door app – a hyper localized social media network described as a cross between Facebook and Craigslist – to accuse the vehicle’s driver of engaging in domestic terrorism, honing in on the color of the driver’s skin and the truck’s Gadsden Flag, “Don’t Tread on Me” license plates as evidence of impending doom.

“There’s this suspicious white truck that is parked on the corner of Belmont and 19th,” the thread’s original post claimed, describing the driver as a white male and making note of the truck’s “Don’t Tread on Me” tags, which are available to anyone with a vehicle registered in Virginia. 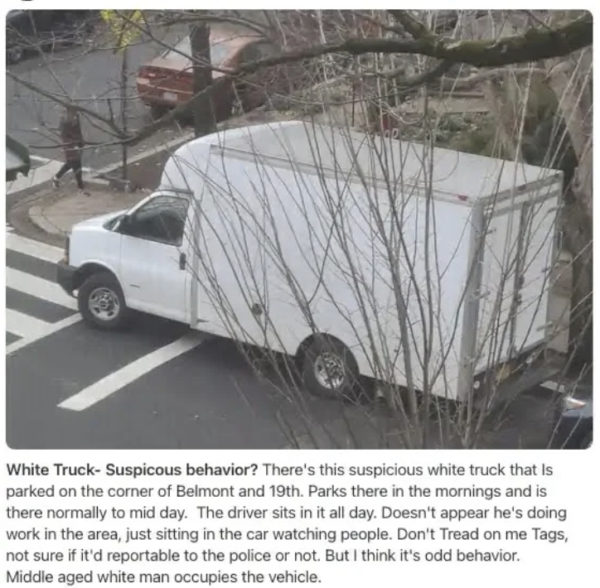 “The Don’t Tread on Me tags say he probably has guns and is probably angry at some minority or politician,” a response to the post read as Adams Morgan residents and users of the community-based Next Door social media platform began to panic over the sight of the truck.

Some users began drawing comparisons to the recent Nashville bombing and the January 6th Capitol Hill protests, which the Adams Morgan residents labeled an as “insurrection.”

One user even made the claim that the truck was part of a plot to assassinate former President Barrack Obama, who lives in the nearby Kalorama neighborhood, while others claimed that the “insurrectionist” vehicle was part of the latest right wing conspiracy to takeover Washington, D.C. “I just want the police to be aware,” another user said.

When police arrived on the scene, they found the vehicle to be occupied by its owner, who was doing nothing wrong and was part of a construction project in the area.

“When things are serious, things need to be taken seriously — instead of just being a sheep. You got to look out for your tribe,” Michael Landry, one of the thread’s posters, told The Washington Post. Additionally, Landry told The Post that he and other Adams Morgan residents have remained “vigilant” in recent months, keeping an eye open for out-of-town license plates, bumper stickers conveying conservative messages, and people who aren’t wearing masks.