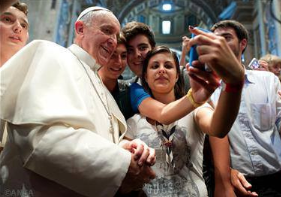 "ROME, October 7, 2013 - As the days go by, the two interviews of Pope Francis with the Jesuit Antonio Spadaro, director of 'La Civiltà Cattolica,' and with the atheist professor Eugenio Scalfari, founder of the leading Italian secular newspaper, 'la Repubblica,' appear more and more as milestones of the beginning of his pontificate. In them Jorge Mario Bergoglio declares his inspiring principles, tells how he sees the current state of the Church, indicates his priorities, enunciates his program. He is also very explicit in marking the points on which he is distancing himself from his predecessors Benedict XVI and John Paul II..." to read more click here: chiesa.espresso.repubblica.it