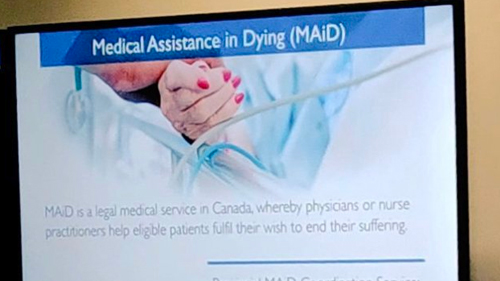 "In yet more evidence of how far Canada has slipped down the euthanasia slippery slope, a hospital in Ontario is advertising 'Medical Aid in Dying' in its urgent care waiting room.

Wesley J Smith of the Discovery Institute writes that a source sent him the above photograph of a public information announcement that appears on a large television screen in a William Osler Health System hospital urgent care waiting room. The same advert can be found on the health system's website.

The advert tries to appear compassionate, with an image of a male doctor’s hand gently resting on the arm of a woman in a hospital bed, and the promise to 'help eligible patients fulfill their wish to end their suffering.'

However, as Mr Smith points out, people in a hospital waiting room may be afraid, in pain, or depressed, and so particularly vulnerable to the suggestion that having their lives ended is the best solution. The advert makes no mention of palliative care or genuine medical care to help alleviate suffering in ways that do not involve killing."