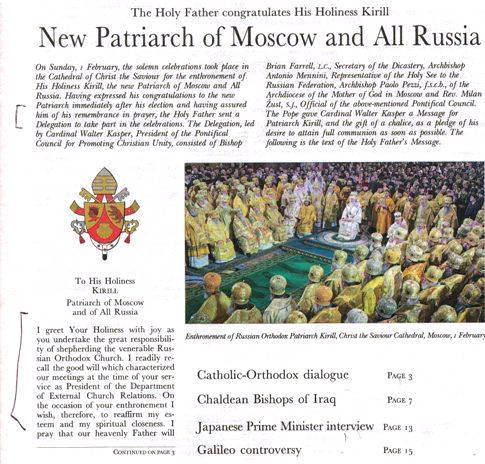 On February 1, 2009, Benedict XVI sent a delegation to take part in the celebrations of “Orthodox” Patriarch Kirill’s “enthronement as the new Patriarch of Moscow and all of Russia.” Benedict XVI gave “Cardinal” Walter Kasper a chalice and a message to deliver to the new “Patriarch” Kirill:

“To His Holiness Kirill Patriarch of Moscow and of All Russia: “I greet Your Holiness with joy as you undertake the great responsibility of shepherding the venerable Russian Orthodox Church. I readily recall the good will which characterized our meetings at the time of your service as President of the Department of Eternal Church Relations. On the occasion of your enthronement I wish, therefore, to reaffirm my esteem and my spiritual closeness. I pray that our heavenly Father will grant you the abundant gifts of the Holy Spirit in your ministry and enable you to guide the Church in the love and peace of Christ. You are now the successor of our beloved brother of revered memory, His Holiness Alexy II, who left his people a deep and abiding inheritance of ecclesial renewal and development, as he led the Russian Orthodox Church out of the long and difficult period of suffering under the totalitarian and atheistic system to a new, active presence and service in today’s society. Patriarch Alexy II worked assiduously for the unity of the Russian Orthodox Church and for communion with the other Orthodox Churches. He likewise maintained a spirit of openness and cooperation with other Christians, and with the Catholic Church in particular, for the defense of Christian values in Europe and in the world. I am certain that Your Holiness will continue to build on this solid foundation, for the good of your people and for the benefit of Christians everywhere…
“Conscious of the enormous responsibilities which accompany the spiritual and pastoral ministry to which the Holy Spirit has called you, I renew to Your Holiness the assurance of my prayers and fraternal good will. I ask Almighty God to bless you with his love, to watch over the beloved Russian Church, and to sustain the Bishops, priests and all the faithful in the unfailing hope which is ours in Christ Jesus.”[1]

Also, as mentioned above, Benedict XVI sent an official delegation “to take part in the celebrations of Patriarch Kirill’s enthronement as the new Patriarch of Moscow and all of Russia.” Benedict XVI gave “Cardinal” Walter Kasper a message and a chalice to give to the new schismatic “patriarch.” Therefore, he encourages the schismatic to offer the Mass and receive the Eucharist outside the true Church, and thus to desecrate the Holy Sacrament of the Eucharist.

Besides this message and special gesture by Benedict XVI, he also sent the new schismatic leader a special telegram four days earlier.

Benedict XVI’s January 28, 2009 telegram to “His Holiness Kirill” on his election as “Patriarch of Moscow and All Russia,” of the Russian Orthodox Church: “To His Holiness Kirill Patriarch of Moscow and of All Russia: I have received with gladness the news of your election as Patriarch of Moscow and All Russia. I warmly congratulate you and wish you every strength and joy in the fulfillment of the great task which lies before you as you guide the Church over which you now preside along the path of spiritual growth and unity. In prayer, I ask the Lord to grant you an abundance of wisdom to discern his will, to persevere in loving service of the people entrusted to your patriarchal ministry, and to sustain them in fidelity to the Gospel and the great traditions of Russian Orthodoxy. May the Almighty also bless your efforts to maintain communion among the Orthodox Churches… I assure Your Holiness of my spiritual closeness and of the Catholic Church’s commitment to cooperate with the Russian Orthodox Church for an ever clearer witness to the truth of the Christian message and to the values which alone can sustain today’s world along the way of peace, justice and loving care of the marginalized. With brotherly affection in the Lord Jesus Christ, I invoke upon you the Holy Spirit’s gifts of wisdom, strength and peace.”[2]

Benedict XVI’s January 28, 2009 comments after his General Audience: “Before greeting the Italian pilgrims, I have three more announcements to make. The first: I have received with joy the news of the election of Metropolitan Kirill as the new Patriarch of Moscow and All Russia. I invoke the light of the Holy Spirit upon him for a generous service to the Russian Orthodox Church, entrusting him to the special protection of the Mother of God… I decided several days ago to grant the remission of the excommunication to which the four Bishops ordained in 1988 by Archbishop Lefebvre without a Papal mandate, were subject. I fulfilled this act of paternal compassion because these Bishops repeatedly manifested their active suffering for the situation in which they had found themselves. I hope that this gesture of mine will be followed by an earnest commitment on their behalf to complete the necessary steps to achieve full communion with the Church, thus witnessing true fidelity to, and true recognition of, the Magisterium and the authority of the Pope and the Second Vatican Council. The third statement: in these days when we remember the Shoah, [“the holocaust”] images come to mind from my repeated visits to Auschwitz, one of the concentration camps in which the heinous slaughter of millions of Jews occurred, innocent victims of a blind racial and religious hatred. As I affectionately renew the expression of my full and unquestionable solidarity with our fellow receivers of the First Covenant, I hope that the memory of the Shoah will lead humanity to reflect upon the unfathomable power of evil when it conquers the heart of man. May the Shoah be a warning for all against forgetfulness, denial or reductionism, because violence committed against one single human being is violence against all. No man is an island. May the Shoah especially teach both old and new generations that only the arduous path of listening and dialogue, of love and forgiveness leads peoples, cultures and religions of the world to the desired goal of fraternity and peace in truth. May violence no longer degrade the dignity of man!” [3]

Benedict XVI again states that the new schismatic leader Kirill is the “Patriarch of Moscow and All Russia.” He calls for the schismatic leader to continue in schism by giving “a generous service to the Russian Orthodox Church.” Benedict XVI then admits that, even though he recently removed the “excommunications” against the four bishops of the SSPX, they are still outside “full communion” with his “Church.” Benedict XVI clearly states that they need to accept “true fidelity to, and true recognition of, the Magisterium and the authority of the Pope and the Second Vatican Council.” As we have proven in our material, the documents of the Second Vatican Council are binding and were authoritatively proclaimed if you believe that Paul VI (who ratified them) was a true pope. This will mean that the SSPX will no longer be able to promote their schismatic positions (for example, rejecting the “canonizations” declared by these recent antipopes), if they decide to join in full communion with Benedict XVI. This will also mean, among other things, that they will have to accept and profess the “legitimacy” of the New Mass; and they will not be able to criticize Benedict XVI’s ecumenism – such as the activity and statements detailed above concerning the Eastern schismatics.