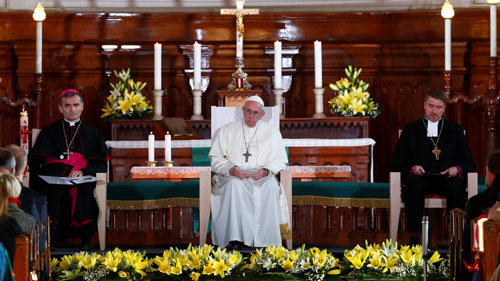 “You, young people, you should know this: when a Christian community is truly Christian, it does not proselytize.... Fear drives us to proselytize.”[1]

Once again, Francis rejects proselytism (i.e. trying to convert non-Catholics to the Catholic faith).  He teaches that young people “should know this: when a Christian community is truly Christian, it does not proselytize.... Fear drives us to proselytize”.  This is astounding heresy from Antipope Francis.

“… we can observe this in Christian communities throughout history… there is a sort of fear of ‘competition’ – and this is bad: the fear of competition – that someone may steal new followers, and we are thus unable to appreciate the good that others do: it is not good because he is ‘not one of us’, they say. It is a form of self-referentiality. Actually, there is the root of proselytism here. And the Church – Pope Benedict used to say – does not grow through proselytism… He [Jesus] calls us not to think according to the categories of ‘friend/enemy’, ‘us/them’, ‘those who are in/those who are out’, ‘mine/yours’, but rather to go beyond, to open our heart in order to be able to recognize God’s presence and action, even in unusual and unpredictable environments that are not part of our circle.”[2]

Francis says that throughout history Catholics have had a “sort of fear” that people would embrace other “Christian Churches” rather than converting to the Catholic Church.  The heretic Francis thinks that such a concern “is bad”.  Francis then (once again) condemns people for trying to convert non-Catholics to Catholicism (proselytism).  Francis says that the Church doesn’t grow through the activity of trying to win new converts.  According to Francis, Jesus “calls us not to think” in terms of who is inside or outside of the Catholic Church.  This is blatantly heretical.  Francis ends by stating that we should “recognize God’s presence and action” in heretical non-Catholic churches.  Francis is a notorious heretic.