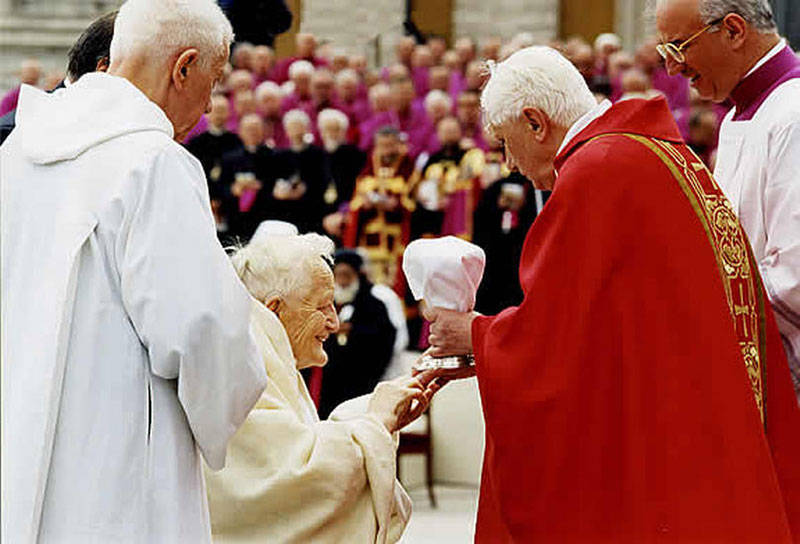 Question: “The German Bishops, recently, have decided to take a step [on so-called ‘inter-Communion’], and so we wonder why Archbishop Ladaria [Prefect of the Congregation for the Doctrine of the Faith] had written a letter that seems somewhat of an emergency brake. After the meeting last 3 May it was stated that the German Bishops should have found a solution, possibly unanimously. What will the next steps be? Will an intervention by the Vatican be necessary in order to clarify, or do the German Bishops have to reach an agreement?”

Francis: “Well. This is nothing new, because the Code of Canon Law provides for what the German Bishops were talking about: Communion in special cases. They were looking at the issue of mixed marriage: whether or not it is possible. However, the Code says that the Bishop of the particular Church — this word is important: particular, if it is a diocese — has to manage this matter: it is in its hands. This is in the Code… I think that this will be an explanatory document, so that each of the diocesan bishops can manage what Canon Law already permits. There was no brake, no. It was directing the matter so it would take the right track. When I visited the Lutheran Church in Rome, this type of question was asked and I responded according to the spirit of the Code of Canon Law, that spirit that they [the Bishops] are seeking now. Perhaps the right information was not there at the right moments; there is a bit of confusion, but this is the matter. In the particular Church, the Code permits it…”[1] 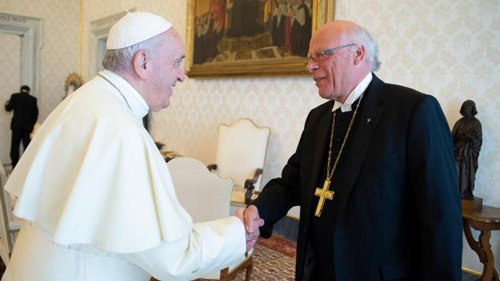 Vatican II document, Orientalium Ecclesiarum # 27: “Given the above-mentioned principles, the sacraments of Penance, Holy Eucharist, and the anointing of the sick may be conferred on eastern Christians who in good faith are separated from the Catholic Church, if they make the request of their own accord and are properly disposed.”[2]

Antipope Paul VI, at the end of every Vatican II document: “EACH AND EVERY ONE OF THE THINGS SET FORTH IN THIS DECREE HAS WON THE CONSENT OF THE FATHERS. WE, TOO, BY THE APOSTOLIC AUTHORITY CONFERRED ON US BY CHRIST, JOIN WITH THE VENERABLE FATHERS IN APPROVING, DECREEING, AND ESTABLISHING THESE THINGS IN THE HOLY SPIRIT, AND WE DIRECT THAT WHAT HAS THUS BEEN ENACTED IN SYNOD BE PUBLISHED TO GOD’S GLORY... I, PAUL, BISHOP OF THE CATHOLIC CHURCH.”[3]

John Paul II, Fidei Depositum, Oct. 11, 1992: “The Catechism of the Catholic Church, which I approved June 25th last and the publication of which I today order by virtue of my Apostolic authority, is a statement of the Church’s faith and of Catholic doctrine… I declare it to be a sure norm for teaching the faith.”[5]

Canon 844.4, 1983 Code of Canon Law: “If the danger of death is present or other grave necessity, in the judgment of the diocesan bishop or the conference of bishops, Catholic ministers may licitly administer these sacraments to other Christians who do not have full communion with the Catholic Church, who cannot approach a minister of their own community and on their own ask for it, provided they manifest Catholic faith in these sacraments and are properly disposed.”[6]

Canon 844.3, 1983 Code of Canon Law: “Catholic ministers may licitly administer the sacraments of penance, Eucharist, and anointing of the sick to members of the oriental churches which do not have full communion with the Catholic Church, if they ask on their own for the sacraments and are properly disposed. This holds also for members of other churches, which in the judgment of the Apostolic See are in the same condition as the oriental churches as far as these sacraments are concerned.”[7]

John Paul II, Ut Unum Sint (# 46), May 25, 1995: “… Catholic ministers are able, in certain particular cases, to administer the Sacraments of the Eucharist, Penance and Anointing of the Sick to Christians who are not in full communion with the Catholic Church...”

John Paul II, Ut Unum Sint (# 58), May 25, 1995: “… By reason of the very close sacramental bonds between the Catholic Church and the Orthodox Church… the Catholic Church has often adopted and now adopts a milder policy, offering to all the means of salvation and an example of charity among Christians through participation in the sacraments and in other sacred functions and objects… There must never be a loss of appreciation for the ecclesiological implication of sharing in the sacraments, especially the Holy Eucharist.”[8]

Antipope John Paul II refers to the “ecclesiological implication” of sharing in the sacraments with the “Orthodox.”  His implication is that they are part of the same Church, as many quotes from the Vatican II antipopes prove.  All of this proves that if the Vatican II antipopes are true popes, it’s the official teaching of the Catholic Church that heretics and schismatics may lawfully receive Holy Communion.  But that’s impossible because the Catholic Church has infallibly taught the opposite.

Pope Boniface VIII, Unam Sanctam, Nov. 18, 1302: “With Faith urging us we are forced to believe and to hold the one, holy, Catholic Church and that, apostolic, and we firmly believe and simply confess this Church outside of which there is no salvation nor remission of sin, the Spouse in the Canticle proclaiming: ‘One is my dove, my perfect one.’”[9]

Pope Eugene IV, Council of Florence, “Cantate Domino,” 1441: “The Holy Roman Church firmly believes, professes and preaches that all those who are outside the Catholic Church, not only pagans but also Jews or heretics and schismatics, cannot share in eternal life and will go into the everlasting fire which was prepared for the devil and his angels, unless they are joined to the Church before the end of their lives; that the unity of this ecclesiastical body is of such importance that only for those who abide in it do the Church’s sacraments contribute to salvation and do fasts, almsgiving and other works of piety and practices of the Christian militia produce eternal rewards; and that nobody can be saved, no matter how much he has given away in alms and even if he has shed blood in the name of Christ, unless he has persevered in the bosom and unity of the Catholic Church.”[10]

Pope Pius VIII, Traditi Humilitati (# 4), May 24, 1829: “Jerome used to say it this way: he who eats the Lamb outside this house will perish as did those during the flood who were not with Noah in the ark.”[11]

Pope Gregory XVI, Commissum Divinitus (# 11), May 17, 1835: “… whoever dares to depart from the unity of Peter might understand that he no longer shares in the divine mystery… ‘Whoever eats the Lamb outside of this house is unholy.’”[12]

As we can see, this is not a merely disciplinary matter that a pope could change.  It’s a matter inextricably bound to the dogma that heretics are outside the Church and in the state of sin.  Being outside the Church and in a state of sin, they cannot receive the Eucharist unto salvation (Eugene IV) but only unto damnation.  To change this law is to attempt to alter Catholic dogma.  The Catholic Church could no more authoritatively teach that it’s lawful for non-Catholics to receive Holy Communion than it could authoritatively teach that it is lawful to get an abortion.  The idea that non-Catholics may lawfully receive Holy Communion is a heresy that has been repeatedly condemned.  It is contradicted by the entire history of the Church.  This issue alone proves that the Vatican II antipopes are not true popes and that we are dealing with two different religions: the Catholic religion and all the popes vs. the religion of the Vatican II sect and its antipopes.