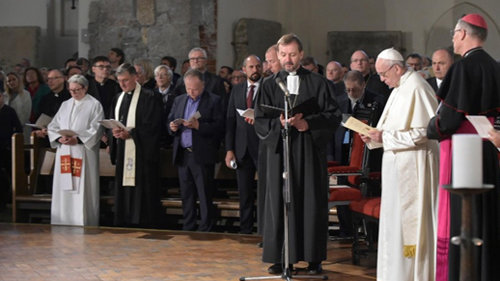 Francis’ September 8, 2018 discourse to “the International Union of Benedictines”:

“Your welcoming of persons of different religious traditions helps to advance with spiritual anointing ecumenism and interreligious dialogue.”[1]

Francis’ September 20, 2018 discourse to participants at the “world conference on xenophobia, racism, and populist nationalism”:

“I cordially greet the representatives from the United Nations Organizations, the Council of Europe, Christian Churches, in particular the World Council of Churches, and those of other religions... We live in times in which feelings that to many had seemed to be outdated appear to be reemerging and spreading. Feelings of suspicion, fear, contempt and even hatred towards other individuals or groups judged to be different on the basis of their ethnicity, nationality or religion… In the face of the spread of new forms of xenophobia and racism, the leaders of all religions also have an important mission: that of spreading among the faithful the ethical principles and values… In particular, may Christian Churches be humble and hardworking witnesses to Christ’s love… The dignity of all men and women, the fundamental unity of mankind, and the call to live as brothers and sisters are confirmed and further strengthened in the measure to which one receives the Good News that all are equally saved and reunited by Christ…”[2]

The heretic Francis “cordially” greets representatives of heretical and schismatic non-Catholic “Churches”.  He says that “the leaders of all religions also have an important mission: that of spreading among the faithful the ethical principles and values”.  Francis calls the followers of various false religions “the faithful”.  The heretic Francis calls for heretical “Christian Churches” to be “hardworking witnesses to Christ’s love”.  Francis concludes by promoting the heresy that among different “Churches” “all are equally saved and reunited by Christ”.

“It is a great pleasure for me to meet with you in this land marked by a journey of recognition, cooperation and friendship between the different Christian churches, which have succeeded in building unity while preserving the unique and rich identity of each. I might say that this is a ‘lived ecumenism’ that is one of Latvia’s special traits. Without a doubt, it is a reason for hope and thanksgiving. I thank Archbishop Jānis Vanags for having opened his doors to us for this prayer meeting. For over eight hundred years, this cathedral has been home to the Christian life of this city, a faithful witness to all those brothers and sisters of ours who have come here to worship and pray, to sustain their hope in moments of trial and to find the courage to face times of great injustice and suffering. Today it welcomes us, so that the Holy Spirit can continue to weave bonds of communion between us and so make us weavers of unity in our cities, lest our differences turn into divisions. May the Holy Spirit arm us with the weapons of dialogue, understanding and desire for mutual recognition and fraternity (cf. Eph 6:13-18). This cathedral is also home to one of the oldest organs in Europe, which at the time of its inauguration was the largest in the world. We can imagine how it accompanied the life, the creativity, the imagination and the devotion of all those who were moved by its sound. It has been the instrument of God and of men for lifting of eyes and hearts to heaven. Today it is a symbol of this city and its cathedral... ‘Father, that all may be one… so that the world may believe’ (Jn 17:21). These words, thank God, continue to echo in our midst... This constant and quiet prayer marks out a path for us; it shows us the way to follow. Immersed in this prayer, as believers in him and in his Church…”[3]

While in the Lutheran “Cathedral”, Francis expressed his happiness that “the different Christian churches” are “preserving” their “unique and rich identity”.  Francis is happy that non-Catholic churches have not converted to “Catholicism” but rather have preserved their heretical identity.  It is a “rich identity”, according to Francis.  Francis describes this situation as a “special” trait of the country.  Francis says that this is a “lived ecumenism” and adds: “Without a doubt, it is a reason for hope and thanksgiving”.  Francis then calls the Lutheran leader (who is a heretical layman) an “Archbishop”.  Francis praises the “Cathedral” of the Lutherans. Francis calls it “home to the Christian life of this city, a faithful witness”, a place people have come to “worship and pray, to sustain their hope in moments of trial”.  In reality, this Lutheran “Cathedral” has been the home to the darkness of Lutheran heresy and schism – the meeting place of a fake Christian Church.  Over the centuries it is where numerous non-Catholics have sadly engaged in false worship.  It's a place they went to practice their heretical religion, which sent them to Hell when they died.  Francis also promotes the idea that there is a true communion with Lutherans.  But the Catholic Church teaches that we are joined in no communion with non-Catholic sects.  Francis says that “differences” about doctrine should never turn into division.  That’s because dogma means nothing to the heretic Francis.  In the Bible, however, St. John teaches us that doctrinal differences do matter.  St. John: “If any man come to you and bring not this doctrine, receive him not into the house nor say to him: God speed you” (2 John 1:10).  Francis ends his speech by calling Lutherans “believers”.  He also quotes from John 17:21 and asks that “all may be one”.  Francis cites these words of Jesus, but with the meaning that the prayer for unity has not been answered.  However, the Catholic Church teaches that Jesus’ prayer was fulfilled when Christ established the Catholic Church.  In his January 6, 1928, encyclical letter on religious unity, Pope Pius XI addressed those who bring forward these words of Our Lord.

Pope Pius XI, Mortalium Animos, January 6, 1928: “For authors who favor this view are accustomed, times almost without number, to bring forward these words of Christ: ‘That they all may be one…. And there shall be one fold and one shepherd,’ with this signification however: that Christ Jesus merely expressed a desire and prayer, which still lacks its fulfillment.  For they are of the opinion that the unity of faith and government, which is a note of the one true Church of Christ, has hardly up to the present time existed, and does not to-day exist.”

“You, young people, you should know this: when a Christian community is truly Christian, it does not proselytize.... Fear drives us to proselytize.”[4]

Once again, Francis rejects proselytism (i.e. trying to convert non-Catholics to the Catholic faith).  He teaches that young people “should know this: when a Christian community is truly Christian, it does not proselytize.... Fear drives us to proselytize”.  This is astounding heresy from Antipope Francis.

“A special thought goes to all our Christian brothers and sisters, particularly the Lutherans, who here in Estonia and in Latvia have offered hospitality at the ecumenical meetings.”[5]

Heretical and schismatic Lutherans are “our Christian brothers and sisters” according to Francis.

“… we can observe this in Christian communities throughout history… there is a sort of fear of ‘competition’ – and this is bad: the fear of competition – that someone may steal new followers, and we are thus unable to appreciate the good that others do: it is not good because he is ‘not one of us’, they say. It is a form of self-referentiality. Actually, there is the root of proselytism here. And the Church – Pope Benedict used to say – does not grow through proselytism… He [Jesus] calls us not to think according to the categories of ‘friend/enemy’, ‘us/them’, ‘those who are in/those who are out’, ‘mine/yours’, but rather to go beyond, to open our heart in order to be able to recognize God’s presence and action, even in unusual and unpredictable environments that are not part of our circle.”[6]

Francis says that throughout history Catholics have had a “sort of fear” that people would embrace other “Christian Churches” rather than converting to the Catholic Church.  The heretic Francis thinks that such a concern “is bad”.  Francis then (once again) condemns people for trying to convert non-Catholics to Catholicism (proselytism).  Francis says that the Church doesn’t grow through the activity of trying to win new converts.  According to Francis, Jesus “calls us not to think” in terms of who is inside or outside of the Catholic Church.  This is blatantly heretical.  Francis ends by stating that we should “recognize God’s presence and action” in heretical non-Catholic sects.  Francis is a notorious heretic.

“The fact of your history, of the history of the Baltic countries [the three countries Lithuania, Latvia, and Estonia known as the Baltic nations]… The faith of these three countries is great; it is a faith born precisely from martyrdom, and this is something you have seen, speaking with the people, as you journalists do, to have news about the country. Moreover, this experience of such important faith produced a unique phenomenon in these countries: an ecumenical life like there is in no others, so generalized. There is true ecumenism: ecumenism among Lutherans, Baptists, Anglicans and also Orthodox. In the [Lutheran] cathedral yesterday, at the ecumenical meeting in Riga, Latvia, we saw it: a remarkable thing; brothers and sisters, neighbors, together in one church... Ecumenism has put its roots there… Even the Vatican, as a state, when it was a Pontifical state, had the death penalty… But then moral consciousness grew; the moral conscience grew.”[7]

Francis promotes ecumenism, calling his recent ecumenical meeting between various churches “a remarkable thing”.  He is glad that various heretical “Christian Churches” were “together” inside the Lutheran “cathedral”.  Francis also admits the “the Vatican, as a state, when it was a Pontifical state, had the death penalty”.  “But then”, Francis says, “moral consciousness grew”.  Francis now heretically teaches that the death penalty is contrary to the gospel.

Read: Antipope Francis Says The Death Penalty Is Contrary To The Gospel And That The Interpretation Of Doctrine Changes

“Today, for the first time, we have also with us two bishops from mainland China. We offer them our warm welcome: the communion of the entire Episcopate with the Successor of Peter is yet more visible thanks to their presence.”[8]

Both of the “bishops” mentioned here by Francis are fully approved by the Communist Party in China.  Francis believes the Catholic Church becomes “more visible” when it has involvement and participation from Communist Party approved “bishops”.  It’s now confirmed that at least one of the two “bishops” from China is an official voting member of the Communist Party (“the National People’s Congress”).  This “bishop” is one of the fewer than 3,000 people in China that have “voting rights” (out of a population of almost 1.5 billion).  The “National People’s Congress” (NPC) has been described as a “rubber stamp,” having “never rejected a [Chinese] government proposal” in its history.[9]

“Dear brothers and sisters, I express my closeness to the city of Pittsburgh, in the United States of America, and in particular to the Jewish community, struck yesterday by a terrible attack in the synagogue. May the Most High welcome the deceased into his peace.”[10]