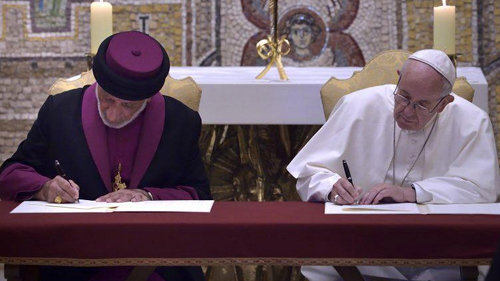 November 9, 2018 Common Statement of two “Church leaders” signed by Francis and “Patriarch” Mar Gewargis III “Patriarch of the Assyrian Church of the East”.  They signed the common statement “after praying together in the Redemptoris Mater Chapel”:

“Our meeting today as brothers echoes the words of the blessed Apostle Paul: ‘Peace be to the brothers, and love with faith, from God the Father and the Lord Jesus Christ’ (Eph 6:23)… From the time of their first meeting in Rome in 1984, our Predecessors of blessed memory, Pope Saint John Paul II and Catholicos Patriarch Mar Dinkha IV, embarked on a journey of dialog… that certain differences in theological expressions are often complementary rather than conflicting… we intend to move forward in mutual recognition and shared witness to the Gospel. Our common Baptism is the solid foundation of the real communion that already exists between us: ‘in one Spirit we were all baptized into one body’ (1 Cor 12:13)… Wars and persecutions have increased the exodus of Christians from lands where they have lived side by side with other religious communities since the time of the Apostles. Without distinction of rite or confession, they suffer for professing the name of Christ. In them, we see the Body of Christ which, today too, is afflicted, beaten and reviled. We are profoundly united in our prayer of intercession and in our charitable outreach to these suffering members of Christ’s body… the blood of these martyrs of our time, members of various Churches but united by their shared suffering, is the seed of Christian unity… The primacy of law, including respect for religious freedom and equality before the law… we pray together to the Apostles Peter and Paul that through their intercession God may bestow his abundant blessings on the Christians of the Middle East.”[1]

Francis signed this common statement of faith with the schismatic, non-Catholic leader of “the Assyrian Church of the East”.  Francis begins by stating that the recently deceased leader of this schismatic sect (“Patriarch” Mar Dinkha IV) is “of blessed memory”.  Mar Dinkha IV died in 2015 and “made ecumenism a priority during his reign”.[2]  In this common statement of faith with a schismatic church leader, Francis says that the schismatics’ “differences in theological expressions are often complementary”.  Francis also tells the schismatic that there is a “real communion that already exists between us”, and that non-Catholics are “members of Christ’s body”.  This is heresy.  People who reject the Papacy or deny any dogma of the faith are outside the Body of Christ.  Francis also teaches the heresy that “members of various Churches” are “martyrs”.   Francis also says that he is “united” in prayer with the schismatics.

“The Holy Roman Church firmly believes, professes and preaches that all those who are outside the Catholic Church, not only pagans but also Jews or heretics and schismatics, cannot share in eternal life and will go into the everlasting fire which was prepared for the devil and his angels, unless they are joined to the Church before the end of their lives; that the unity of this ecclesiastical body is of such importance that only for those who abide in it do the Church’s sacraments contribute to salvation and do fasts, almsgiving and other works of piety and practices of the Christian militia produce eternal rewards; and that nobody can be saved, no matter how much he has given away in alms and even if he has shed blood in the name of Christ, unless he has persevered in the bosom and unity of the Catholic Church.”

“Whoever wishes to be saved, needs above all to hold the Catholic faith; unless each one preserves this whole and inviolate, he will without a doubt perish in eternity.”

November 9, 2018 address to the “Patriarch of the Assyrian Church of the East”:

“… I had the joy of again meeting Your Holiness in Bari last 7 July, at the Day of Reflection and Prayer for Peace in the Middle East… certain differences in theological expression can be considered complementary rather than conflicting… This journey propels us forward, yet it also demands that we continue to preserve our historical memory, in order to draw inspiration from the witnesses of the past... Your Holiness, dear brother, with affection I wish to express my gratitude for your visit and for the gift of being able to pray together for one another today…”[3]

Francis tells “His Holiness” (the leader of the schismatic “Assyrian Church of the East”) that he has “gratitude” for his visit and for “the gift” of praying with him.  To pray with a leader of a non-Catholic religion is a mortal sin.

Message from Francis “for the [November 30, 2018] celebration of St. Andrew” to Bartholomew “the Ecumenical Patriarch”:

“To His Holiness Bartholomew Archbishop of Constantinople Ecumenical Patriarch

It is with particular joy, on the feast of Saint Andrew the Apostle, Patron of the Ecumenical Patriarchate, that I convey my sentiments of deep affection, together with the assurance of my prayers for Your Holiness, beloved brother in Christ, and for the Church entrusted by our Lord to your pastoral care. I also extend cordial greetings to the members of the Holy Synod of the Ecumenical Patriarchate, to the clergy, monks and nuns, and all the faithful gathered in the Patriarchal Church of Saint George for the solemn celebration in honor of Saint Andrew, the first-called and brother of Saint Peter. The exchange of delegations between the Church of Rome and the Church of Constantinople, on the occasion of their respective feast days, has become a joyful custom over the years and expresses the profound bond that unites our two Sees… This was definitively resumed by our venerable predecessors, Patriarch Athenagoras and Pope Saint Paul VI, and has enabled us to rediscover those bonds of communion that have always existed between us. Our Churches have safeguarded the Apostolic tradition with great care, along with the teaching of the first Ecumenical Councils and the Church Fathers… At the same time both Churches, with a sense of responsibility towards the world, have sensed that urgent call, which involves each of us who have been baptized, to proclaim the Gospel to all men and women… With God’s help, through encounter and dialogue on our journey together over the last fifty years, we already experience being in communion… Here I would express my profound gratitude to Your Holiness for your presence at the day of prayer and reflection for peace in the Middle East, held last 7 July in Bari, attended by the Heads of Churches, or their representatives… Trusting in the intercession of our patrons, Saint Peter and Saint Andrew, I assure you and all the faithful of the Ecumenical Patriarchate of my renewed prayerful best wishes, on behalf of the whole Catholic Church. With sentiments of profound esteem and fraternal affection, trusting also in your own prayers, I exchange with Your Holiness an embrace of peace in Christ our Lord.”[4]

Francis calls the eastern schismatic leader the “Archbishop of Constantinople”.  This is schismatic.  The Catholic Church teaches that non-Catholics have no right or power of ruling, since they are outside the edifice itself.

Pope Leo XIII, Satis Cognitum (# 15): “From this it must be clearly understood that Bishops are deprived of the right and power of ruling, if they deliberately secede from Peter and his successors; because, by this secession, they are separated from the foundation on which the whole edifice must rest.  They are therefore outside the edifice itself…”

Pope Pius XI, Mortalium Animos (# 11), Jan. 6, 1928: “Furthermore, in this one Church of Christ no man can be or remain who does not accept, recognize and obey the authority and supremacy of Peter and his legitimate successors.”

Pope St. Leo the Great, Sermon 129: “Wherefore, since outside the Catholic Church there is nothing perfect, nothing undefiled… we are in no way likened with those who are divided from the unity of the Body of Christ; we are joined in no communion.”

Pope Innocent III, Eius exemplo, Dec. 18, 1208: “By the heart we believe and by the mouth we confess the one Church, not of heretics, but the Holy Roman, Catholic, and Apostolic Church outside of which we believe that no one is saved.”