Francis’ May 10, 2017 message of Francis to “His Holiness” Tawadros II “Pope of Alexandria and Patriarch of the See of Saint Mark”:

“Dear Brother, After my visit to Egypt and the blessed encounter with Your Holiness in Cairo, and recalling the fourth anniversary of our fraternal meeting in Rome on 10 May 2013, I take this opportunity to offer my prayerful best wishes for your peace and health, as well as my joy and gratitude for the spiritual bonds uniting the See of Peter and the See of Mark. I once more express my profound appreciation for your hospitality and for our moving meeting and common prayer as brothers in Christ.  I am especially grateful that we have strengthened our baptismal unity in the body of Christ… Along this path we are sustained by the powerful intercession and example of the martyrs… I exchange with Your Holiness a fraternal embrace of peace in Christ our Lord.”[1]

Francis’ May 13, 2017 press conference on return flight from Fatima to Rome:

Claudio Lavagna of NBC: “You hope that he [Trump] will soften his decisions...”

Francis: “This is a political calculation that I do not permit myself to make.  Even in the religious sphere, I am not a proselytizer. Thank you.”

Comment: Francis admits (once again) that he does not try to convert non-Catholics to the Catholic faith.

Nicholas Senèze: “Thank you, Holy Father.  May we go back to Fatima, to which the Fraternity of Saint Pius X has great devotion.  We hear much said about an agreement that would give official status in the Church to the Fraternity...”

Francis: “Relations are fraternal.  I have a good relationship with Monsignor Fellay; I have spoken [with him] several times… I don’t like to rush things.  Walking, walk, walk, and then we will see.  For me it is not a question of winners or losers, no.  It is a problem of brothers who have to walk together, seeking the way to take steps forward.”

Comment: The apostate Francis says that he has a good relationship with the heretical leader of the SSPX.  No true Catholic would ever have a “good relationship” with an outrageous public heretic who constantly attacks traditional Catholic teachings.  It’s another example of how Fellay is a demonic heretic.

Tassilo Forchheimer: “Holy Father, on the anniversary of the Reformation, can Evangelical and Catholic Christians walk another stretch of the road together?  Will there be the possibility of participating at the same Eucharistic Table?  Some months ago, Cardinal Kasper said that it might be possible to take a further step forward in the course of this year…”

Francis: “Great steps forward have been taken!  We can think of the first Declaration on Justification: from that moment, the journey has not stopped.  The visit to Sweden was very meaningful, because it was the beginning [of the commemorations], and also a commemoration with Sweden. There too, [it was] meaningful for the ecumenism of journeying, of journeying together in prayer, in martyrdom… Praying together, bearing witness together…”[2]

Francis’ May 12, 2017 address to “Participants at conference organized by the Vatican Observatory”:

“The issues you have been addressing during these days at Castel Gandolfo are of particular interest to the Church, because they have to do with questions that concern us deeply, such as the beginning of the universe and its successive evolution…”[3]

Here Francis promotes the erroneous and unscientific theory of evolution. 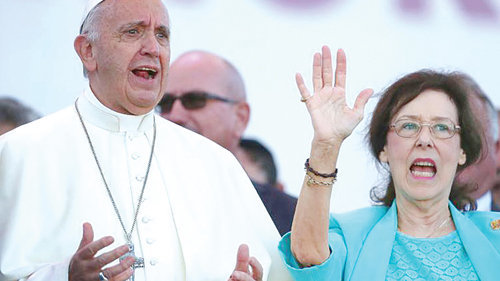 Francis’ June 3, 2017 reflection during his presence at a large “prayer vigil organized by the International Charismatic Renewal Services”:

“Are we, believers from 120 countries of the world, gathered here to celebrate the sovereign work of the Holy Spirit in the Church, which began 50 years ago and gave rise… to an institution?  No. To an organization? No.  To a tide of grace, to the tide of grace of the Catholic Charismatic Renewal. A work born of Catholicism? No. It was born of ecumenism!  It was born of ecumenism because it is the Holy Spirit who creates unity and it is the same Holy Spirit who gave the inspiration so that it may be so!... Today we have chosen to gather here, in this place – as Pastor Traettino said – because here, during the persecutions, Christians were martyred, for the entertainment of those who were watching. Today there are more Christian martyrs. Those who kill Christians, before killing them do not ask them: ‘Are you Orthodox? Are you Catholic?  Are you Evangelical?  Are you Lutheran?  Are you a Calvinist?’  No.  ‘Are you Christian?’ – [If they respond] ‘Yes’, their throats are cut, immediately. Today there are more martyrs than in the early times. This is the ecumenism of blood: it unites the testimony of our martyrs today. In different places in the world, Christian blood is being shed!... Fifty years of Catholic Charismatic Renewal. A tide of the Spirit’s grace! Why is it a tide of grace? Because it does not have a founder, nor statues, nor governing bodies.”[4] 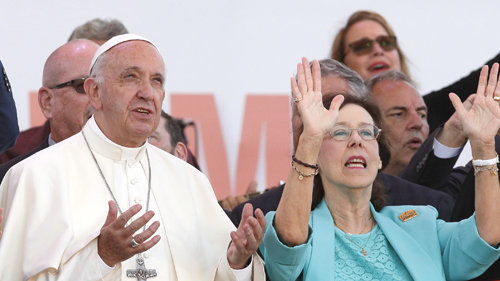 Francis calls the Protestant leader at this meeting “Pastor” Traettino.  The heretical layman is a true pastor, according to the heretic Francis.  Anyone who claims to be a Christian and is killed for claiming to be one is a “martyr” according to the heretical antipope Francis.  This heresy has been solemnly condemned by the Catholic Church.  Francis mentions Calvinists among the Protestants whom he considers martyrs.  Calvinists believe that God predestines people to Hell and that He wills every act of pedophilia, rape, and murder that has occurred in history.  This is outrageous wickedness and heresy promoted by the demonic antipope Francis.

“I welcomed with affection the Members of the Delegation which came to Rome in the name of the Ecumenical Patriarch, my very dear brother Bartholomew. This presence is also a sign of the brotherly bonds that exist between our Churches.”[5]

Francis says that “brotherly bonds” exist between the “Orthodox” church and his Vatican II sect.

“May the same Lord, who longs to see his flock gathered together, also bless and protect the Delegation of the Ecumenical Patriarchate, together with my dear brother Bartholomew, who has sent them here as a sign of our apostolic communion.”[6]

Francis asks God to “bless and protect” heretical and schismatic leaders.  Francis also admits (once again) that he is in communion with the schismatic church.

Francis’ June 27, 2017 address to the delegation sent by the “Ecumenical Orthodox Patriarch”:

“I am most grateful to His Holiness Ecumenical Patriarch Bartholomew and to the Holy Synod for having sent you, dear brothers, as their representatives, to share with us the joy of this feast... Your presence affords me the welcome opportunity to recall that this year marks the fiftieth anniversary of the visit of Blessed Paul VI to the Phanar in July 1967, and of the visit of Patriarch Athenagoras, of venerable memory, to Rome in October of that same year.  The example of these courageous and farsighted pastors, moved solely by love for Christ and his Church… I am deeply grateful to the Lord for continuing to grant me occasions to meet my beloved brother Bartholomew... let us pray for one another and ask the Lord to make us instruments of communion and peace.  And I ask you, please, to continue to pray for me.”[7] 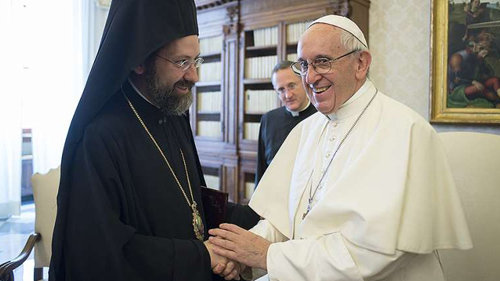 Francis’ June 27, 2017 address to the delegation sent by the “Ecumenical Orthodox Patriarch”:

“The Church’s mission, then, is not to spread a religious ideology, much less to propose a lofty ethical teaching.”[8]

The Catholic Church teaches exactly the opposite of what Francis says here.  The Church’s mission is to spread a religious ideology and a lofty ethical teaching.