Francis’ May 3, 2019 video message to the people of Bulgaria:

“I will have the joy of meeting His Holiness the Patriarch, and the Holy Synod of the Bulgarian Orthodox Church.  Together we will manifest our willingness to follow the Lord Jesus…”[1]

Francis calls the schismatic leader “His Holiness” and their heretical and schismatic synod “Holy”.

Francis’ May 5, 2019 address during meeting “with the authorities, representatives of civil society and diplomatic corps” of Bulgaria:

“I send my respectful greetings to His Holiness Patriarch Neofit, with whom I will shortly meet, to the Metropolitans and Bishops of the Holy Synod, and to all the faithful of the Bulgarian Orthodox Church… I also cordially greet the Christians of other Ecclesial Communities, the members of the Jewish community and the followers of Islam…  Let us profit from the hospitality of the Bulgarian people so that every religion, called to foster harmony and concord, can contribute to the growth of a culture…”[2]

The apostate Francis believes that “every religion can contribute to the growth of a culture”.

Francis’ May 5, 2019 remarks during greeting to “the Holy Synod of the Bulgarian Orthodox Church”:

“Your Holiness, Venerable Metropolitans and Bishops… On this journey, we are sustained by great numbers of our brothers and sisters, to whom I would especially like to render homage: the witnesses of Easter. How many Christians in this country endured suffering for the name of Jesus, particularly during the persecution of the last century! The ecumenism of blood! They spread a pleasing perfume over this ‘Land of Roses’. They passed through the thicket of trials in order to spread the fragrance of the Gospel. They blossomed in fertile and well-cultivated ground, as part of a people rich in faith and genuine humanity that gave them strong, deep roots. I think in particular of the monastic tradition that from generation to generation has nurtured the faith of the people. I believe that these witnesses of Easter, brothers and sisters of different confessions united in heaven by divine charity, now look to us as seeds planted in the earth and meant to bear fruit. While so many other brothers and sisters of ours throughout the world continue to suffer for their faith, they ask us not to remain closed, but to open ourselves, for only in this way can those seeds bear fruit… How important it is, while respecting our own traditions and distinctive identities, to help one another to find ways of passing on the faith in language and forms that allow young people to experience the joy of a God who loves them and calls them!... I am grateful to Your Holiness and the Holy Synod for this benevolent reception… Your Holiness, shortly I will be able to visit the Patriarchal Cathedral of Saint Aleksander Nevskij and to pray there… Your Holiness, dear Brothers, I assure you of my prayers for you, for the faithful of this beloved people, for the lofty location of this nation, and for our journey in an ecumenism of blood, of the poor and of mission. In turn, I ask a place in your prayers, in the certainty that prayer is the door that opens to every path of goodness.”[3]

Francis lavishes praise on the leaders of the Bulgarian “Orthodox Church” during his greeting to them. Francis then publicly teaches (once again) that there are non-Catholic martyrs.  Francis says that “these witnesses” are “brothers and sisters of different confessions” and are “united in heaven”.  Francis also tells the schismatic leader that he is grateful to him and “the Holy Synod”, and he calls schismatics “the faithful”.  Francis mentions that he will soon “be able” to pray in the schismatic church.  Sofia’s “Patriarchal Cathedral of Saint Aleksander Nevskij” is Bulgaria’s “most important Orthodox Church”.[4]  The heretic Francis ends by speaking of “an ecumenism of blood” and asks for “a place in” the schismatics’ prayers.

“As evidence of my esteem and affection for this venerable Orthodox Church of Bulgaria, I have had the joy of greeting and embracing my brother, His Holiness Patriarch Neofit and the Metropolitans of the Holy Synod.”[5]

Francis says he has “esteem and affection” for the heretical and schismatic “Orthodox Church”, and declares it to be “venerable”!

Francis’ May 6, 2019 discourse after “prayer service in the presence of leaders of various religious confessions in Bulgaria”:

“Our celebration of peace takes place on the ruins of ancient Serdika, here in Sofia, the heart of Bulgaria. From here, we can see the places of worship of the different Churches and religious Confessions: Saint Nedelya of our Orthodox brothers and sisters, Saint Joseph of us Catholics, the synagogue of our older brothers, the Jews, the mosque of our Muslim brothers and sisters and, closer to us, the Armenian church.”[6] 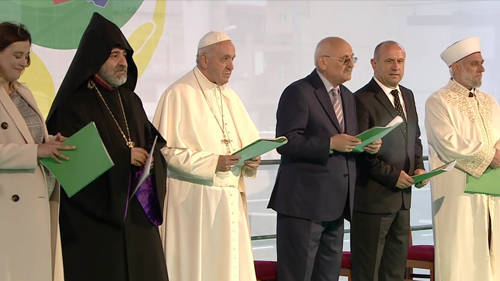 Francis identifies non-Catholic churches, the synagogue, and a mosque as “places of worship”, with no mention of the fact that they are places of false worship.

Francis’ May 7, 2019 discourse during meeting with “the authorities, representatives of civil society and members of the diplomatic corps” of Bulgaria:

“Here, in fact, the different religious identities of Orthodox, Catholics, other Christians, Muslims and Jews, and the ethnic differences between Macedonians, Albanians, Serbs, Croats, and persons of other backgrounds, have created a mosaic in which every piece is essential for the uniqueness and beauty of the whole. That beauty will become all the more evident to the extent that you succeed in passing it on and planting it in the hearts of the coming generation. Every effort made to enable the diverse religious expressions…”[7]

This is blunt apostasy.  The apostate Francis says that it “is essential for the uniqueness and beauty of the whole” society to have the presence of false religions, including Islam and Judaism.  He encourages the members of these false religions to pass on and plant their false faiths “in the hearts of the coming generation”.  Francis closes by saying that “every effort” should be made “to enable the diverse religious expressions”.  What an apostate.

Francis’ May 7, 2019 video message to the people of North Macedonia:

“The particular beauty of your country comes from the variety of cultures and ethnic and religious affiliations that inhabit it.”[8]

According to Francis, “the particular beauty” of a country “comes from the variety of religious affiliations that inhabit it”.  This is astounding heresy and apostasy.

Francis’ May 7, 2019 address during “ecumenical and interreligious meeting with young people in Skopje”:

“This is why, dear Liridona, dear friends, a person can never, never dream too much. Try to think of your greatest dreams, like Liridona’s dream – do you remember it? To give hope to a weary world, together with others, both Christians and Muslims. This is certainly a very fine dream. She didn’t think about little things, ‘on the ground level’, but she dreamed in a big way and you, young people, should dream big. A few months ago, a friend of mine, Ahmad Al-Tayyeb, the Grand Imam of Al-Azhar, and I had a dream much like yours, that made us want to make a commitment and sign a document that says that faith must lead us believers to see other persons as our brothers and sisters.”[9]

During this “ecumenical and interreligious meeting with young people”, Francis declared that Muslims are “believers”.

Francis’ May 7, 2019 reflection during “General Audience”:

“I had the joy of taking a step forward in the meeting with Patriarch Neofit of the Bulgarian Orthodox Church and Members of the Holy Synod… it was significant that the encounter with young people took place precisely there. Young people of different Christian denominations and also of other religions — Muslims, for example — all of them united in their desire to build something beautiful in life. I urged them to dream big and to get involved…”[10]

Francis speaks of how he told members of different religions (not to convert) but to “build something beautiful in life”.  Francis doesn’t believe that people who remain in these false religions and don’t convert to Catholicism will spend eternity on fire.

Francis’ May 15, 2019 greeting to the “International Catholic-Jewish Liaison Committee”:

“I offer you my encouragement, for dialogue is the way to better understand one another and to work together in building a climate not only of tolerance but also of respect between religions.”[11]

Building a climate of respect for false religions is an important work of the Vatican II Sect.

Francis’ May 20, 2019 speech “to participants in the General Chapter of the Pontifical Institute for Foreign Missions”:

“There is a danger that crops up again – it seemed to have been overcome but it reappears… confusing evangelization with proselytism. No. Evangelization is bearing witness to Jesus Christ, dead and Risen. He is the One who attracts. This is why the Church grows by attraction and not by proselytism, as Benedict XVI said. But this confusion arose perhaps from a politico-economic conception of ‘evangelization’, which is no longer evangelization; then presence, concrete presence, which leads them to ask you why you are like this. And so you proclaim Jesus Christ. This is not seeking new members for this ‘Catholic society’, no.”[12]

Francis says the Church doesn’t grow by proselytism or trying to convert people to Catholicism.  The apostate says that he “is not seeking new members” for “the Catholic Church”.

“I already foretaste the joy of meeting the Patriarch and the Permanent Synod of the Romanian Orthodox Church...”[13]

Francis says he can “already foretaste the joy of meeting” the schismatic “Orthodox Church” leader.

Francis’ May 31, 2019 address during meeting “with the permanent Synod of the Romanian Orthodox Church”:

“Your Holiness, Venerable Metropolitians and Bishops of the Holy Synod... Here, as in so many other places nowadays, you have experienced the passover of death and resurrection: how many sons and daughters of this country, from various Churches and Christian communities, knew the Friday of persecution, endured the Saturday of silence and experienced the Sunday of rebirth. How many were the martyrs and confessors of the faith! In recent times, how many, from different confessions, stood side by side in prisons to support one another in turn! Today their example stands before us and before the young… Journeying together with the strength of memory. Not the memory of wrongs endured and inflicted, judgments and prejudices, excommunications that enclose us in a vicious circle and bring only barrenness… Our own journey has begun anew with the certainty that we are brothers and sisters walking side by side, sharing the faith… praying together under the protection of the Holy Mother of God, a time of invoking the Spirit for one another. May the Holy Spirit renew us, for he disdains uniformity and loves to shape unity from the most beautiful and harmonious diversity…  Your Holiness and dear Brothers, let us journey together, to the praise of the Most Holy Trinity and for our mutual benefit, as we seek to help our brothers and sisters to see Jesus. I once more assure you of my gratitude and of my own affection, friendship, fraternity and prayer, and that of the Catholic Church.”[14]

Francis starts off by declaring leaders of the schismatic church to be “Venerable”.  Francis says “various Churches and Christian communities” have “martyrs and confessors of the faith”!  He says “their example” of dying in their false faiths is an “example” which “stands before us and before the young”.  Francis then utters the blasphemy that the Holy Spirit (The Spirit of Truth and Unity) “disdains uniformity and loves to shape unity from the most beautiful and harmonious diversity”.  Francis closes by assuring the schismatics of his “gratitude” and the “affection” of “the Catholic Church”.

Francis’ May 31, 2019 discourse during meeting in Bucharest “with authorities, diplomatic corps and civil society”:

“My respectful greeting goes likewise to all the Metropolitians and Bishops of the Holy Synod, and to all the faithful of the Romanian Orthodox Church.”[15]

Francis speaks of “the faithful” of the schismatic church.