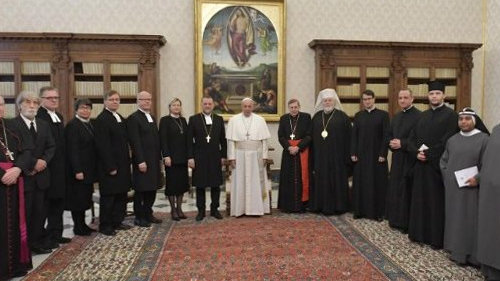 “With joy I greet you all on the happy occasion of the dedication of the new Cathedral of the Nativity, built in the New Administrative Capital… I address a special greeting to my dear Brother, His Holiness Pope Tawadros II, and to the dear Coptic Orthodox Church, which has been able to bear a true testimony of faith… Dear brothers and sisters, you have martyrs who give strength to your faith. Thank you for your example… In the new Cathedral may the worship of God on high always be welcome, and may there descend His blessing…”[1]

Francis says it is a “happy occasion” to see the completion of a new (and very large) schismatic church.  Francis says the schismatic and heretical Coptic “Orthodox Church” and its leader (whom Francis calls “Holiness” and “Pope”) “bear a true testimony of faith”.  In addition to denying the Papacy, the “Coptic Orthodox” reject the Council of Chalcedon and the dogma that Jesus Christ, one divine Person (the Second Person of the Blessed Trinity), has two unconfused natures.

Council of Chalcedon, Definition of Faith, 451: “Therefore, following the holy fathers, we all with one accord teach men to acknowledge one and the same Son, our Lord Jesus Christ, at once complete in Godhead and complete in manhood, truly God and truly man, consisting also of a reasonable soul and body; of one substance with the Father as regards the Godhead, and at the same time of one substance with us as regards the manhood; like us in all respects, apart from sin; as regards the Godhead, begotten of the Father before the ages, but yet as regards the manhood begotten, for us men and for our salvation, of Mary the Virgin, the God-bearer; one and the same Christ, Son, Lord, Only-begotten, recognized in two natures, without confusion, without change, without division, without separation…”

The “Coptic Orthodox” are therefore manifest heretics for various reasons.  So, according to Francis, the notorious heresy and schism of “Coptic Orthodoxy” is the “true testimony of faith”.  Francis also calls the heretical and schismatic sect “dear”, an “example”, and says they “have martyrs”.  Francis is a heretic.

“Ecumenism is not an optional thing.”[2]

Francis’ January 18, 2019 “homily” to “mark the start of the Week of Prayer for Christian unity”:

“This evening I am particularly pleased to pray together with representatives of other Churches present in Rome, and I offer them a fraternal and heartfelt greeting. I also greet the ecumenical delegation from Finland, the students of the Ecumenical Institute at Bossey...”[3]

Francis is “particularly pleased” to commit mortal sin by praying with leaders of heretical non-Catholic churches.

Francis’ January 19, 2019 address to “members of the ecumenical delegation from Finland”:

“As disciples, following the same Lord, we have increasingly come to realize that ecumenism is a journey and, as the various Popes have repeatedly stated since the Second Vatican Council, a journey that is irreversible… I am grateful to the Lutheran Bishop of Kuopio for his kind words and very welcome prayers, but also for indicating our duty to carry out, before all else, a common service of charity and witness to the faith… I am confident that our shared witness of prayer and faith will prove fruitful and that your visit will strengthen the good cooperation already existing between Lutherans, Orthodox and Catholics in Finland. For this intention, and for each of you, I beg God’s abundant blessing. I also ask you to continue to pray for me. Thank you.”[4]

In the passage previously cited, Francis told us that ecumenism is not optional.  Now he tells us that ecumenism is “irreversible”.  The Vatican II Sect’s heretical teaching on ecumenism is the mandatory and “irreversible” teaching of the Vatican II Sect, according to the antipope.  Francis calls the Lutheran layman a “bishop” and says he is a “witness to the faith”.  According to the heretic Francis, people who indoctrinate others into the heresy of Lutheranism are a “witness to the faith”.

“Even in the Catholic media there is a lack of compassion. There is schism, condemnation, cruelty, exaggerated self-praise, the denouncing of heresy…”[5]

Francis criticizes those in the “Catholic” media who are involved in “the denouncing of heresy”.  Francis says this because he is a heretic and an apostate.