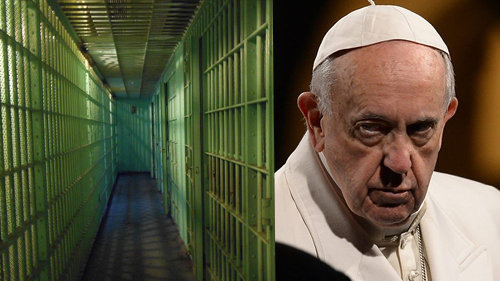 Francis’ December 17, 2018 address to the Delegation of the International Commission against the Death Penalty:

“I cordially greet you and would like to express my personal appreciation for the work that the International Commission against the Death Penalty carries out in favor of the universal abolition of this cruel form of punishment… All this is now reflected in the recently revised text of n. 2267 of the Catechism of the Catholic Church, which expresses the progress of the doctrine of the last Pontiffs, as well as a change in the conscience of the Christian people… a penalty contrary to the Gospel… In past centuries, when the instruments that we have available today for the protection of society were lacking and the current level of development in human rights had not yet been achieved, recourse to the death penalty was presented on some occasions as a logical and just consequence. Even in the Papal States recourse was made to this inhuman form of punishment, ignoring the primacy of mercy over justice. It is for this reason that the new version of the Catechism implies that we should also assume our responsibility for the past and that we acknowledge that the acceptance of this type of penalty was due to the mentality of an era that was more legalistic than Christian… However, the harmonious development of doctrine necessarily requires that the Catechism reflect the fact that, despite the gravity of the crime committed, the Church teaches, in the light of the Gospel, that the death penalty is always inadmissible… The United Nations’ resolutions on a moratorium on the use of the death penalty, which aim to suspend the application of capital punishment in member countries, are a necessary path to undertake… Dear friends, I thank you again for this meeting, and I assure you that I will continue to work together with you for the abolition of the death penalty. The Church is committed to this…”[1]

Francis admits that the Vatican II Sect’s teaching against the death penalty is “a change in the conscience of the Christian people” from what Catholics believed throughout history.  He says it is “a penalty contrary to the Gospel” and “always inadmissible”.  Francis criticizes the Papal States for having what he calls “this inhuman form of punishment”.  The Papal States were a series of territories in the Italian Peninsula under the direct sovereign rule of the Pope, from the 8th century until 1870.[2]  Francis is attacking the Catholic Church’s teaching that the death penalty is permissible for certain grave crimes.  Francis is a heretic.  Francis then promotes the heretical idea of the “development of doctrine”.

Pope Pius IX, First Vatican Council, Session 3, Canon 3 on Faith and Reason, 1870, ex cathedra: “If anyone says that it is possible that at some time, given the advancement of knowledge, a sense may be assigned to the dogmas propounded by the Church which is different from that which the Church has understood and understands: let him be anathema.”

Pope Pius IX, First Vatican Council, Sess. 3, Chap. 2 on Revelation, 1870, ex cathedra: “Hence, also, that understanding of its sacred dogmas must be perpetually retained, which Holy Mother Church has once declared; and there must never be a recession from that meaning under the specious name of a deeper understanding.”

Pope Pius X, Pascendi Dominici Gregis (# 26), Sept. 8, 1907, On the doctrine of the Modernists: “To the laws of evolution everything is subject – dogma, Church, worship, the Books we revere as sacred, even faith itself, and the penalty of disobedience is death.  The enunciation of this principle will not astonish anybody who bears in mind what the Modernists have had to say about each of these subjects.”

Pope Pius X, Lamentabile, The Errors of the Modernists, July 3, 1907, #22: “The dogmas which the Church professes as revealed are not truths fallen from heaven, but they are a kind of interpretation of religious facts, which the human mind by a laborious effort prepared for itself.” - Condemned

Francis says that the Catholic Church teaches “in the light of the Gospel, that the death penalty is always inadmissible”.  Francis calls people to work together “for the abolition of the death penalty” and declares that “the Church is committed to this”.  The Vatican II Sect (i.e. the Whore of Babylon) is committed to this – not the Catholic Church.

St. Thomas Aquinas, Summa Theologiae, Pt. II-II, Q. 11, A. 3: Heretics “deserve not only to be separated from the Church by excommunication, but also to be severed from the world by death. For it is a much graver matter to corrupt the faith which quickens the soul, than to forge money, which supports temporal life. Wherefore if forgers of money and other evil-doers are forthwith condemned to death by the secular authority, much more reason is there for heretics, as soon as they are convicted of heresy, to be not only excommunicated but even put to death.”