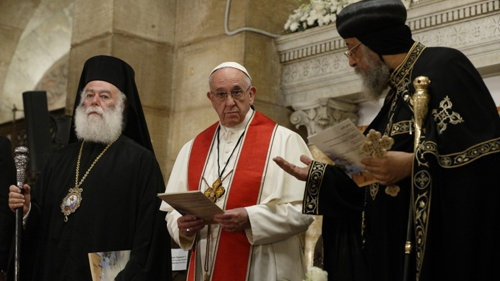 “Even in the Catholic media there is a lack of compassion. There is schism, condemnation, cruelty, exaggerated self-praise, the denouncing of heresy…”[1]

Francis criticizes those in the “Catholic” media who are involved in “the denouncing of heresy”.  Francis says this because he is a heretic and an apostate.

“Ecumenism is not an optional thing.”[2]

Francis’ January 19, 2019 address to “members of the ecumenical delegation from Finland”:

“As disciples, following the same Lord, we have increasingly come to realize that ecumenism is a journey and, as the various Popes have repeatedly stated since the Second Vatican Council, a journey that is irreversible… I am grateful to the Lutheran Bishop of Kuopio for his kind words and very welcome prayers, but also for indicating our duty to carry out, before all else, a common service of charity and witness to the faith… I am confident that our shared witness of prayer and faith will prove fruitful and that your visit will strengthen the good cooperation already existing between Lutherans, Orthodox and Catholics in Finland. For this intention, and for each of you, I beg God’s abundant blessing. I also ask you to continue to pray for me. Thank you.”[3]

In the passage previously cited, Francis told us that ecumenism is not optional.  Now he tells us that ecumenism is “irreversible”.  The Vatican II Sect’s heretical teaching on ecumenism is the mandatory and “irreversible” teaching of the Vatican II Sect, according to the antipope.  Francis calls the Lutheran layman a “bishop” and says he is a “witness to the faith”.  According to the heretic Francis, people who indoctrinate others into the heresy of Lutheranism are a “witness to the faith”.