The far-left Anti-Defamation League is warning Elon Musk that reinstating banned Twitter users they don’t like will lead to “dire consequences,” publishing a list of names, including 45th President Trump, who they claim should never be allowed back online.

The ADL claims that allowing President Trump, Nick Fuentes, Alex Jones, Steve Bannon, Andrew Tate, and David Duke back on Twitter would be a “grave” mistake that will lead to “dire consequences.” On a webpage dedicated to keeping Twitter under leftist control, the Jewish advocacy group called for the men to be kept off the platform for life.

The ADL dubbed the listed men a group of “high-profile and dangerous individuals” and preceded their names with left-wing insults, like “white nationalist” and “conspiracy theorist.”

“Providing these individuals again with the vast megaphone of Twitter to spread hate and misinformation would lead to dire consequences,” threatened the ADL. 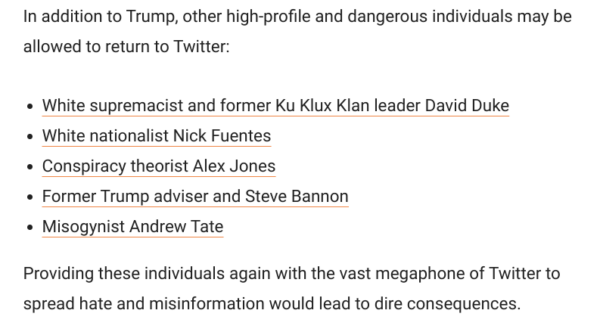 The list of names released by the ADL was part of a larger, 5-point list published by the group, presenting their politically-charged demands in the form of “concerns.”

Along with calling for the accounts of President Trump and others they disagree with to be kept offline, the ADL called for continued content censorship and narrative steering before accusing Elon Musk, and white people in general, of making the internet “dangerous” for Jews, homosexuals, and racial minorities.

Even prior to Musk’s takeover, the ADL claims, Twitter “inadequately enforced its policies around antisemitism,” so they’re calling on Musk to not just keep the censorship policies in place, but enforce them to an even higher degree.

Any relaxing of censorship policies, the ADL claims, “would result in increased harm to marginalized identities such as Jewish, LGBTQ+, or black people.”